The Chinese theme is often used within slot gaming, after all the orient exudes mystery and often fills the imagination with treasures unfound. NextGen Gaming have created the wonderfully authentic looking oriental game centred around a chinese dragon. Boku Slots welcome you to the world of Tianlong, may fortune be upon you.

Play Tianlong on any of these top casino sites;

Tianlong is a 5-reel, 10 pay line slot game that has a low RTP of just 95.24%, compared to other games out there. Although it does seem a little on the low side, we feel that the bonuses found in the game itself more than make up for it. Another thing in Tianlong’s favour is that wins can be formed from both left to right and right to left, making the chances of a win more achievable.

Bet Amounts – Betting begins at just 1p per pay line and can be increased to £100 per pay line. You can play with all 10 lines or adjust the pay lines in accordance with your budget. It means that spins can cost anywhere from 1p per spin if playing 1 line, to £1,000 per spin if playing max bet and max lines. Always ensure you have amended the bet amount and line amount before hitting spin, as you don’t want to bet more than you can afford.

Wild Symbol – The Chinese dragon named Tianlong is your wild symbol. He will only appear on reels 2, 3 and 4, and he will substitute for all other symbols except the scatter. This is an expanding wild, so he will spread across the entire reel to ensure he is able to complete any winning combinations that are available. The expanding wild will also trigger the Tianlong Wild Re-spin as well. 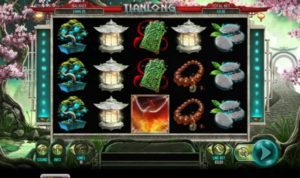 Scatter Symbol – The scatter is a burning phoenix rising from the flames, so land three or more on reels 2, 3 or 4 and you will trigger the re-spins.

Tianlong Expanding Wild Respin – Whenever Tianlong appears as an expanding wild on the reels, it will trigger this feature. Each reel that contains the dragon will become a sticky wild for one re-spin. If during this re-spin another wild lands, it will trigger another spin and so on. This can prove to be quite a lucrative feature.

Phoenix Bonus Spins – Land three or more phoenix scatter symbols to trigger this feature. You will then be awarded with 15 extra spins. During the bonus spins round all wins are multiplied x2 and you can also re-trigger the feature by landing more scatters during the play. On top of that the Tianlong Expanding Wild re-spins can also be triggered during this feature.

Aside from the fact that we have a penchant for mythical animals such as dragons and for oriental themed slots, there is so much to love about Tianlong. Yes, the RTP is low, but the features can be re-triggered time and again, and that dragon wild is simply fantastic. We dare you to not enjoy this game with its exciting features, lovely graphics and soundtrack.