There have been tales told about Vikings for as long as anyone can remember and here at Boku Slots we love nothing more than a good Scandinavian tale or two. But unlike the pillaging and plundering Vikings in tales of old, Playtechs storybook version is much more pleasing to the eye. They launched Viking Mania which combines cheeky and cheerful characters, with a range of features and bonuses. 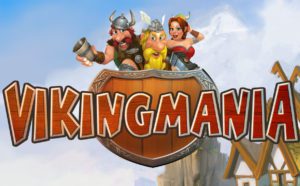 Play Viking Mania on any of these top casino sites:

Viking Mania is a 5-reel, 20 pay line slot with an RTP of 97% worthy of Odin himself. The game is centred around a Viking village, which is the background scenery and there is a cute little intro reel at the beginning of the game.

Bet Amounts – Betting begins at 20p per pay line in play and can be increased to £100 per pay line in play if you so desire. This means spins can cost from 20p for one line, £4 for 20 lines at 20p, or a whopping £2,000 per spin. Nice if you have that kind of money to spare, however we always advise you check your pay lines and bet amounts before hitting spin. There is no going back once you have done so.

Wild Symbol – The wild symbol is a blonde-haired Viking warrior and he substitutes for all symbols except the scatter and the bonus. He will only appear on reels 3, 4 and 5 and becomes an expanding wild during the bonus game.

Scatter Symbol – Your scatter symbol is a Viking map and if you land 3 or more of these you will win 10 bonus spins. These will be triggered automatically and offer some great extras as explained below.

Bonus Symbol – Thor’s hammer is the bonus symbol, well we like to think of it as Thor’s hammer anyway. Land the hammer on the centre line of each reel and it will activate the square. This means it will unveil one of the letters needed to make the word BONUS. Once you have all five letters the bonus game will be triggered. 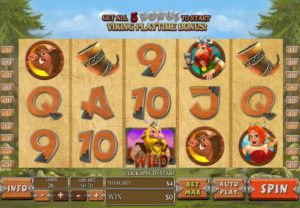 Bonus Spins Feature – Once you have triggered this by landing three or more scatters, you will be taken through a set of 10 bonus spins. Each spin offers a multiplier of x3 your stake amount. Thors hammer does not appear during this feature game and the blonde Viking becomes an expanding wild. You are able to retrigger the bonus spins, all you need is to land 3 or more scatter symbols during the feature and your new spins will be tacked onto the amount you already have in play.

Viking Play Time Bonus Feature – The bonus game on Viking Mania can be quite tricky to trigger, as you need to land thors hammer on the centre of each reel. The character then needs to reveal a letter form the word BONUS and once you have all five you enter the arena. Once there however, that’s where the fun begins. Your Viking friend is pinned to a target and you have a range of items to throw at him to score points. You get ten throws during the bonus round of which you are guaranteed to have 7 hits, this will accumulate wins to be paid out at the end of the bonus round.

So, for us the game overall is ok, it has great graphics and is well designed. Even the RTP is higher than most. But, we feel the whole point of bonus games is to be able to access them, albeit not too easily as that defeats the object. The fact that to access the bonus game you need to spell out the word bonus would have been enough. However, this can only be done if the hammer symbol lands on the centre reel and is then activated! It takes far too long to do this and kind of removes half the fun of the game. Viking Mania itself is fun for a while, but can be a bit tiresome when constantly waiting for that bonus game to land.