Here we have another mega movie franchise switched up and converted from a console game into a mobile friendly slot game. Hitman is all about a hired assassin travelling the world killing for money, now you can join him and grab a piece of the pie. Microgaming has of course added their own unique touch to the Hitman theme, which we are sure will bring lots of fun to the players. 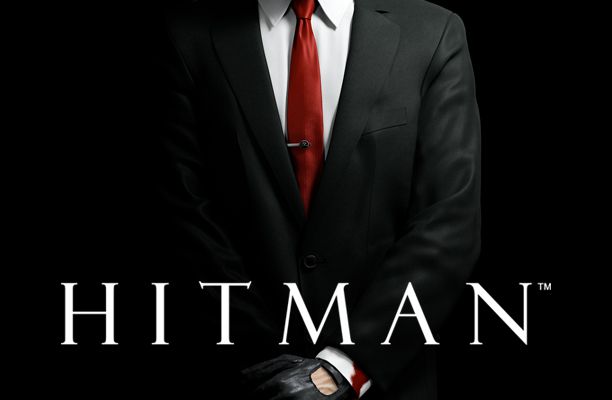 Play Hitman on any of these top casino sites;

Hitman is a 5-reel, 15 pay line slot that offers a lower than usual RTP of 95.81% but we aren’t too put off by this and neither should you. Symbols appear to be geared towards the console version of images, as opposed to the movie. But you will still see the Hitman himself and lots of assassin themed items. These include sniper rifles, knifes, guns, poison, cash and a garotte, as well as your bonus symbols which we will go through below. As for the reels themselves, they are set out pretty basic and don’t really conjure up too much in the imagination stakes, but don’t let that fool you.

Bet Amounts – Betting begins at just 1p per line in play and can be increased to £5 per line in play. This means spins can cost players anything from 1p right up to the maximum of £75 per spin. There are a couple of different ways to amend your bet, you can adjust the lines in play but understand that if you have fewer lines active your chances of winning are decreased. Also coin amount and coin level can be amended to suit your needs, just make sure you are happy with your stake before hitting spin.

Wild Symbol – Your wild symbol is the Hitman with guns crossed, he will substitute for all other symbols except the scatter and bonus. He will only appear on reels 2, 3 and 4 and will expand to cover the whole reel to help complete any potential wins.

Scatter Symbol – An 18 logo, usually seen as a rating on movies and games is your scatter symbol. Landing three of these anywhere on reels 3, 4 or 5 will trigger the bonus spins round, where you will also be awarded some extra’s too.

Bonus Symbols – Hitman has x2 bonus symbols in play which each trigger a very interesting feature. The first of the symbols is the Laptop, because every good Hitman needs one of these and the second is the Hitman insignia. 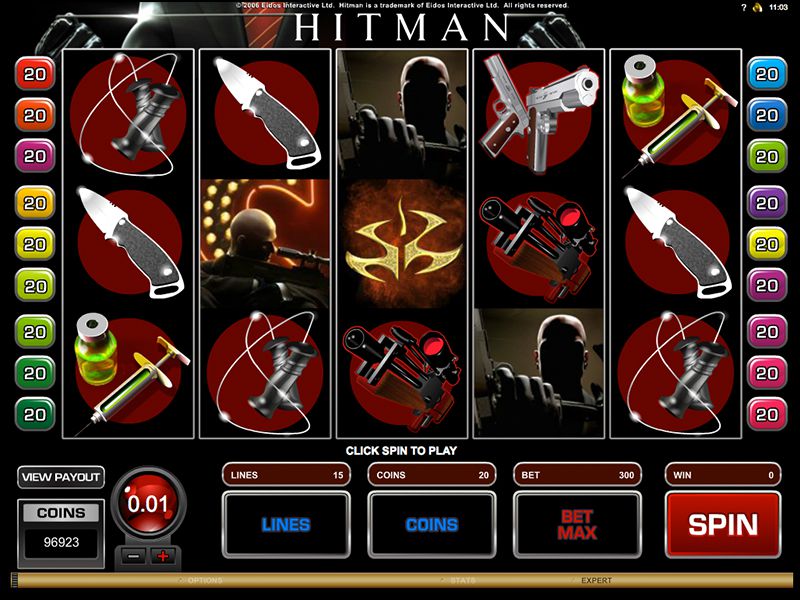 Bonus Spins Feature – Having landed three of the scatter symbols you will enter the bonus spins round. An allocation of 18 spins will be given, plus a x2 multiplier on all wins within the round! During the bonus spins you will still be able to land those expanding wilds and the other bonus symbols are also still in play. So not only can you trigger the other features from within this bonus, but you can also retrigger the spins as well.

Laptop Bonus Feature – To trigger this feature you need to have landed three of the laptop symbols anywhere on reels 3, 4 or 5. Once triggered you will be taken to a new screen and shown a line up of potential kill contracts, just like a normal Hitman of course. Each one will have a different set of values attached to it and it is up to you to decide which contract you will take. After you have decided you will then have to pick a weapon, which will be your prize multiplier. Your prize will be decided on by an amount chosen somewhere between the two values shown under your chosen kill contract and then multiplied by the value attached to your weapon of choice. Once done you will be returned to the main game to continue spinning the reels.

Insignia Bonus Feature – Land three gold insignias on reels 1, 2 and 3 to trigger this game feature. When inside the bonus, the reels will hold in place whilst you decide which one of the three insignia to pick. Each one holds a random coin amount to be awarded, so choose wisely. After you have chosen, the amount will be added to your balance and you can resume spinning the reels.

Whilst Hitman isn’t the most visually attractive game, it certainly isn’t lacking in features or atmosphere. Playing with the sound on will defiantly make things a little more interesting, especially with the extra animations that occur. Though it is usually better with games like Hitman to play with all lines active, its not really needed as the features can still be triggered even when there is only one-line in play. However, it would take a lot longer to activate them and the wins will be smaller so that is a choice only you can make. Overall Hitman was a winning combination for us, we were just a little underwhelmed with the graphics.