The lead character of this movie themed slot is well known in all age groups and now he can terrify you direct from your mobile! Enter the world of Michael Myers thanks to Microgaming’s Halloween slot. Spin the reels straight from the porch of someone’s home and pray Michael doesn’t make an appearance. Whether you have seen the movie or not, this is a definite must for fans of the horror genre and for fans of impeccably designed slots. Read on below to find out why Halloween should be on your to play list. 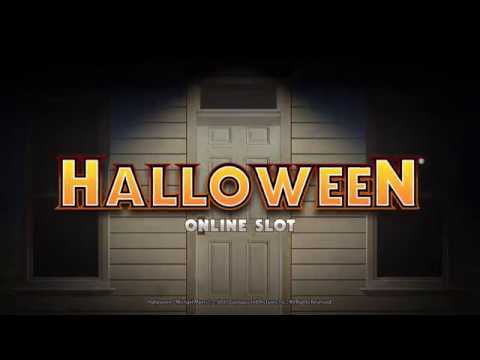 Play Halloween on any of these top casino sites;

Halloween is a 5-reel slot with 50 fixed pay lines in play and an impressive RTP of 97%. It is full of interesting features too including a shifting section on the reels which moves on each spin, aptly named Wandering Reels. Symbols include images from the movie such as Laurie, Loomis, Lynda and Andie who make up your higher values. A knife, gun, clown mask, phone, book and knitting needles make up your lower values. The reels are set out in the front of a house on a porch, which we like to think is a safe haven from Mr Myers himself! But, if you look closely you may see him sneaking around in the background, waving his knife at you!

Bet Amounts – Betting on Halloween begins at 50p per spin and can be increased to £200 per spin at its maximum. Amend your bets by clicking the stake amount to the right of the spin button, then just play around with the sliders until you reach your desired stake amount.

Wild Symbol – Pumpkins are generally meant to scare you anyway but in Halloween they have been given an edge, a knife edge! Watch out for the pumpkin wild symbol as it will substitute for all others except the wheel bonus.

Wheel Bonus Symbol – A wheel symbol is your scatter on Halloween and landing three of these anywhere in view will trigger the wheel bonus game. Here you will get to spin a huge wheel accruing prizes until you land on one of the mini feature game sections. 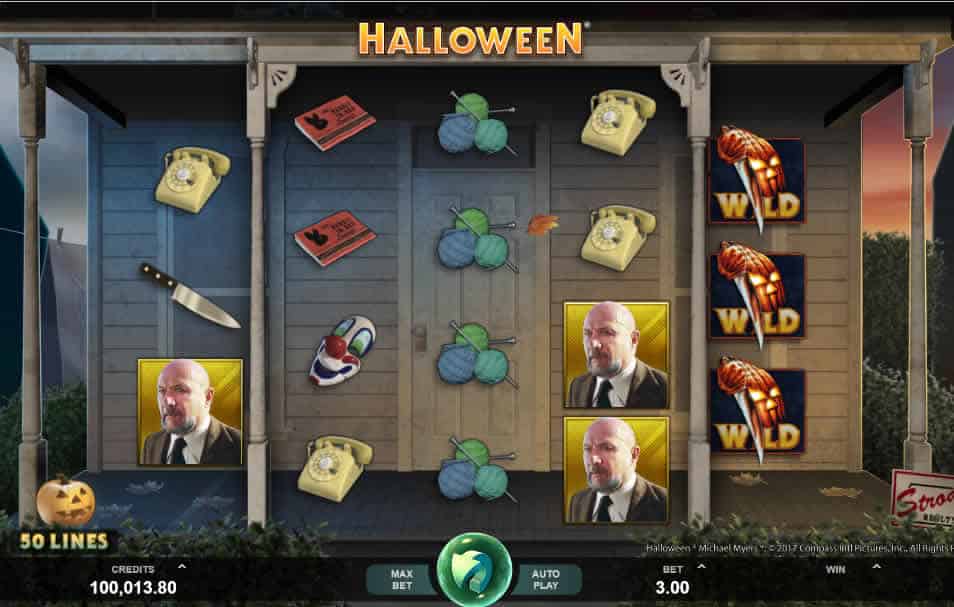 Wandering Reels Feature – This is an interesting twist on a standard slot game and it certainly makes play a little more intense. At the beginning of every spin the front porch will move to the left, to the centre or to the right. It will always cover three reels at a time and it will always offer 50 pay lines, but the structure of those pay lines change each time the porch moves. Inside the porch there is the chance of landing larger 4×3 symbols, helping create more potentially bigger wins for you.

Once you have played through your bonus spins or the bogeyman bonus, whichever you land, you are then returned to the main game.

Did Michael catch you or did you escape with your winnings and your life? Microgaming have taken a great movie and adapted it into a great slot game. The addition of the wandering reels and the larger 4×3 symbols dropping in makes for some profitable game play indeed. We loved the wheel of fortune style bonus too, which only ends once you trigger one of the 2 mini features. The wins to be had here are epic, if you are lucky enough to land a few prize sections first. A lot of thought has gone into the extra’s and that shows with the bogeyman bonus. It was fun to play, and we escaped a few times but more often than not we tripped and got caught. If you have never seen Halloween before you will still get a lot of enjoyment from the game and with the very generous RTP hopefully lots of wins too.