Don’t let it be said that Boku Slots are not educated people, we love a good art gallery. However, when IGT combined the art of Leonardo Da Vinci and the thrill of online slots, we were jumping for joy. Get yourselves along to the best art gallery online, called Da Vinci Diamonds and see what bonuses are available. 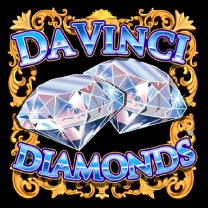 Play Da Vinci Diamonds on any of these top casino sites;

Da Vinci Diamonds is a 5-reel, 20 fixed pay line slot, offering an RTP of 94.94% to its players. The game is full of symbols represented by Da Vinci’s own works of art including the famous Mona Lisa herself, portrait of a young man and of course Cecilia Gallerani. The rest of the game is brightly coloured and surrounded by a gilt edged frame around the reels.

Bet Amounts – Betting on Da Vinci Diamonds begins at £1 per line and £20 per spin, which for the RTP on offer seems fairly high. The maximum bet is £10,000 at a £500 per line bet amount, making this game one of the highest stake amounts we have seen. We certainly advise making sure you have amended your bet amounts before hitting spin on this one.

Wild Symbol – IGT offer a twist with their wild symbol in that it doubles as a scatter too. We have seen this in other slots from different game designers. Keep an eye out for a pink gem with the word wild written across the front, which will substitute for all other symbols except the bonus.

Bonus Symbol – A very pink and golden bonus symbol will trigger the feature if you land 3 of them on reels 1, 2 and 3.  You will be awarded 6 bonus spins and offered some intriguing extra’s during the feature too.

Tumbling Reels Feature – You will see once in play that any gems forming part of a winning combination will be removed and new ones will fall into place. This is normally known as waterfall or cascading gems and is very helpful in creating multiple wins from just one bet.

Bonus Spins Feature – After you have landed the required amount of bonus symbols, you will trigger this feature and will be allocated 6 bonus spins. Whilst this may seem low compared to other games, there are a few other tricks up IGT’s sleeve. If you land additional bonus symbols during the feature you will be allocated more spins, which are decided randomly as shown below:

The bonus spins on Da Vinci Diamonds end once your allocated amount counts down to zero, or you have played the maximum of 300 spins that can be allocated. As well as being able to boost those spins, three new paintings come into play here and work as special scatter symbols offering only scatter wins on top of the line win. They are Da Vinci’s Madonna, Virgin of the Rocks and Portrait of an unknow woman.

If anything, Da Vinci Diamonds has novelty value for the addition of Leonardo da Vinci’s paintings as the symbols, but that is where the best of the fun lies. The bonus feature is exciting once it triggers, which isn’t as often as you would hope. When it does there is certainly good money to be made, with all the extra spins and scatter wins involved. But, overall the game is too highly priced where betting is concerned and is not for those that have a low bank roll behind them.