If like many of us winter isn’t your thing, then you will love this snowy theme without feeling the awful cold. NextGen Gaming have created an icy landscape for their slot Spin Sorceress and it is epic. This impressive game includes their amazing superbet feature, on top of an intricate design and a couple of great bonuses. 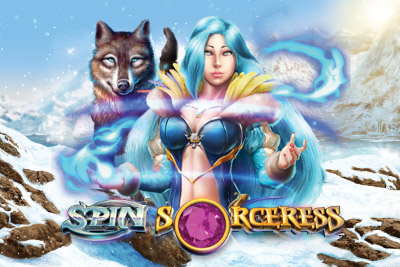 Play Spin Sorceress on any of these top casino sites;

Spin Sorceress is a 5-reel, 243 ways to win slot which offers players a variable RTP, ranging from 94.62% to 97.14%. This is largely due to the superbet option that NextGen Gaming have in so many of their games.

As for the game itself, the reels spin transparently across the setting of an icy, cold landscape which is home to the Spin Sorceress. The reels are set inside an ornate golden frame and the symbols are all beautifully designed. A wolf, orb, gem stone spear head and gem stone lotus flower all make up your higher value symbols. With the usual card values, A, K, Q, J, 10 and 9 making up your lower values.

Bet Amounts – Betting begins from 25p up to £1.25 per spin, when you are not using the superbet options. With superbet activated bets can range up to the maximum of £25 per spin, but there are some interesting extras that come with the heightened bet amount.

Wild Symbol – Your wild symbol is the Spin Sorceress herself and she will substitute for all other symbols except the scatter. She will only appear on reels 2, 3 and 4 in the main game, but she also has a few tricks up her sleeve for you.

Scatter Symbol – A jewel encrusted amulet is the Spin Sorceress slots scatter symbol. Land three or more of these anywhere on the reels to trigger the bonus spins feature. Scatter wins are also in play here too, giving win multipliers on top of any line wins.

Superbet Feature – For anyone who has played Nextgen Games before this may already be familiar. However, for those of you that haven’t, here is where it gets interesting. Superbet allows a player to increase their bet amount for the chance of some extra bonuses on each spin. Clicking on the superbet icon will expand the reel and each icon on this reel will have a cost per spin attached. They will also offer extras by way of multipliers on the wilds as well.

With each increase in superbet level your stake will also increase and the RTP will also increase too. Be sure to check out the pay tables to understand how superbet fully works before choosing this option. We would always advise our readers that they only stake what they can afford to lose.

Sorceress Wild Reel Feature – At random on any spin you may see the Spin Sorceress appear to the right of the reels. When this happens, she will turn any of reels 2, 3 or 4 totally wild. If you are really in her good books she may turn all three reels wild, leading to bigger wins.

Bonus Spins Feature – Three or more of the jewel encrusted amulet scatter symbol will trigger the bonus feature for you. Here you will be allocated with 10 bonus spins to play through, spins can be retriggered from within the round. On each of the spins up to 3 reels will turn fully wild for you, in the hopes of completing much bigger win combinations.

Spin Sorceress is another great addition to the NextGen Gaming library and one we could see ourselves playing again in the future. The addition of the superbet feature means the game is appealing to players who wish to play high or low stakes. Features trigger easily and often as do the wins, which is perfect for experienced and novice players. If you want to take advantage of the highest RTP you need to play the level 5 superbet. This is still affordable though and won’t be too detrimental to your balance.

Wish Upon a Jackpot

December 23, 2018 Boku Slots Comments Off on Wish Upon a Jackpot