Ever fancied running with the wolves? Boku Slots have done just that with the Microgaming Untamed Wolf Pack slot game and boy oy boy was it fun. You may have played the other games in the Untamed series and wanted a bit of a change, well you will find it here. Although the basics remain the same with Untamed Wolf Pack the pay outs are a little higher, making it that bit more interesting.

Play Untamed Wolf Pack on any of these top casino sites;

As with the other games in the series, Untamed Wolf Pack is a 5-reel, 243 ways to win slot game that has an RTP of 96.17%. Now the RTP is slightly lower on this game than the others, but it still plays really well and has some great features too so don’t be put off.

Bet Amounts – Betting on Untamed Wolf Pack begins at 30p per spin, which is the same as previous Untamed games. However, unlike other games the maximum bet on Untamed Wolf Pack goes as high as £45. Be sure to adjust each scale according to your needs before hitting spin. Don’t forget to check what the pay out is based on the bet you are making, as these are adjusted automatically when the bet changes.

Wild Symbol – The Untamed Wolf Pack logo is your wild symbol and it substitutes for all other symbols, except the scatter. It is the second highest paying symbol in the game and at the maximum bet amount it offers a pay out of 750 coins, if you land 5 symbols on a winning line.

Scatter Symbol – Your scatter symbol is a wolf’s eye in a golden gilt-edge surround. Landing 3 or more of these will trigger the bonus spins feature, which has a few extra’s included. The Lucky Nudge feature is randomly triggered by the scatter too. So, if you have two full scatters on screen and the tip of a third showing, you may be lucky enough to receive a random nudge on that scatter so it can trigger the bonus. 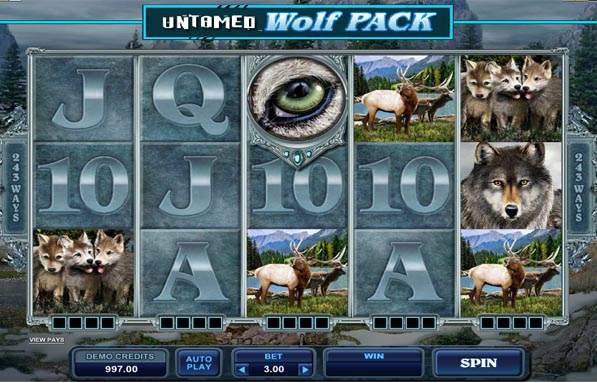 Collect a Wild Feature – This is a great feature and is available on all Untamed series games. The way it works is simple, at the bottom of reel there are 4 boxes. Every time a wild lands on a reel it will fill up one of the boxes below that reel. Fill all four boxes and the reel above will turn completely wild for four spins and then it starts again. The sheer brilliance of this is that each reel has four boxes and is filled up every time a wild lands, meaning you may end up with one or all reels totally wild for four spins at any one time.

Bonus Spin Feature – After you have landed 3 or more scatters on Untamed Wolf Pack, the bonus spins feature will trigger. You will be allocated 10 spins to play and during this you will receive rolling wilds. This means as a wild symbol lands it will remain in place and then move down by one on each consequent spin, until it reaches the bottom of the reel. This brings plenty of win chances with it and makes up for the fact that the spins can’t be retriggered.

Gamble Feature – When you win you will be offered the compass style gamble feature, where you will be given the choice to fill the circle with a red or green colour. Red means lose, green means win and the bigger the green section the better the chance of winning, however the prize amount is smaller. The bigger the red section the less chance of a win but the bigger the prize. It is up to you which you decided to do, but to be safe click the bank first which will save 50% of your win in case you lose. In that case at least you have something to collect if fortune is not in your favour.

Having played through two of the other Untamed games in this series, we found we much preferred the Bengal Tiger. That being said Untamed Wolf Pack still has great qualities and the wins came as quick as they did in other versions of the game. If the bonus spins could be retriggered that would do wonders for the game and is really the only negative point we have.

Secret of the Stones

December 12, 2018 Boku Slots Comments Off on Secret of the Stones