What could be more interesting than spinning fruit? Cube shaped spinning fruit above a flowing river of course. With Strolling Staxx that is just what you are getting, with a little more besides. NetEnt are the team behind this next slot, and you can be sure of a good surprise as you go down to the woods today. So, off you go, just follow the river and watch out for falling fruit! 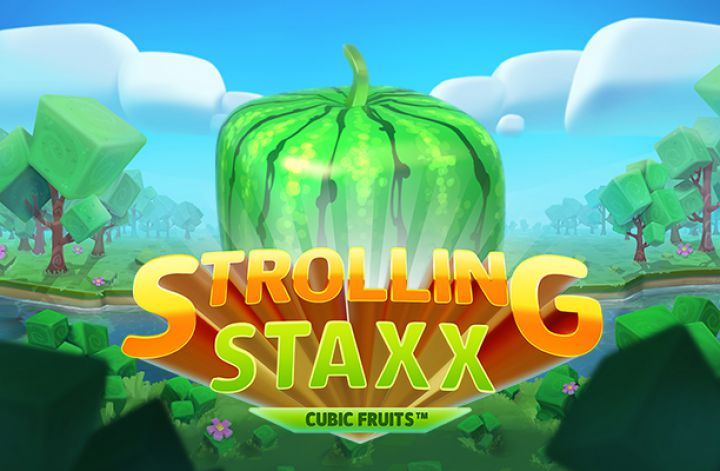 Play Strolling Staxx on any of these top casino sites;

Strolling Staxx is a 5-reel, 10 fixed pay line slot offering you a fruity RTP of 95.98%. As the game begins you will hear lots of woodland noises, birds twittering, the river flowing and a soft enchanting track to soothe you as you play. Your symbols all spin transparently above the river and even drop into the river too which is a quirky addition to the game. Everything is cubed in this slot even the trees, making it look almost video game like in essence.

Bet Amounts – Betting begins at 10p per spin and can be increased up to £20 per spin if you are playing the main game. If, however you want to change things up, you can use the Bonus Bet option which we will explain below. To amend your normal stake, you can change the coin level or the coin value. These are found to the left and right of the spin button. Adjust these amounts with the plus and minus signs until you are happy with your stake and ready to spin.

Wild Symbol – A golden W is your wild symbol and again it’s cube shaped to fit the theme. It will substitute for all other symbols and can land anywhere on the reels.

Colossal Symbols – Strolling Staxx has the colossal symbol feature, which means that all symbols including the wild can become larger symbols at any point during the spins. They will appear as either 2×2 or 3×3 symbols and are triggered at random, landing either partially or fully in view. 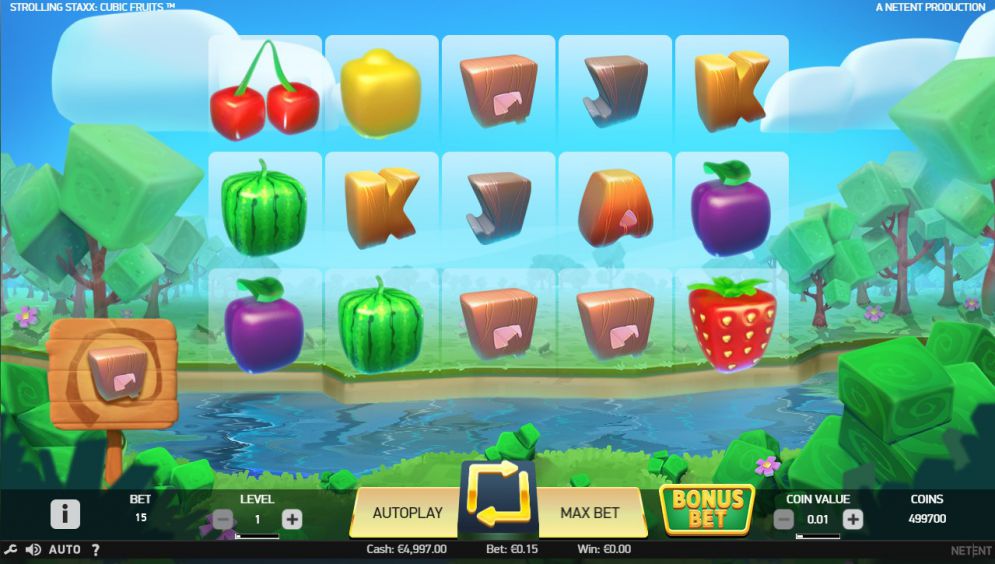 Other Symbols – All of the symbols here are squared in shape, from the higher value fruits to the lower value cards. Higher value symbols include a watermelon, strawberry, lemon, cherries and a plum. With lower values being the A, K, Q and J all are drawn as if carved from wood.

Strolling Staxx Feature – If one reel or more is covered with the same symbol, then it will trigger the strolling staxx feature. Including stacks on one reel or colossal symbols too. So, if you land a 2×2 or 3×3 colossal symbol fully visible on the reels, then you will trigger the strolling staxx as well. However the feature is triggered, the stack/colossal and subsequent matching or connecting symbols will now start moving to the left. After each step is taken the reels will respin with the stacked symbols held in place. Any more matching symbols that form new parts to the stack, will now be incorporated into the main stack as it moves towards the left and off the reels. The respins end once the complete stack has moved off the reels. However, if during the respin a new stack of symbols has formed the respins will continue until all stacks have been removed.

Bonus Bet Extra Feature – At the bottom of the reels you will see a symbol that says Bonus Bet on it. If you click this symbol it will increase your bet by 50% of the current bet amount, so if you have bet £10 it will increase it to £15 for instance. But what do you get for this extra cost to your stake? You get something called the extra chance, and it is quite an interesting one. In order to bag the extra chance, you need to trigger the strolling staxx feature. Now your reels will hold in place while a colossal 3×3 symbol will spin above the reels moving from left to right. If you are lucky it will land adjacent to the stack of symbols that triggered the strolling staxx initially. If not so lucky, it will land partially and just add extra symbols to the stack itself. Either way on each respin you have a much bigger symbol stack to play with.

Strolling Staxx is an innovative way to beat the boring fruits style slot that many people see. NetEnt obviously put a lot of thought in how to take a simple over done theme and change it up enough to keep it fresh and appealing.

The feature which is named after the game itself is also fresh and modern and gives players a little excitement as you wait for those respins to add more to your stack. Now the Bonus Bet, this is an interesting addition to the game and one that we would have liked to have seen given more options. Whilst the potential of the extra 3×3 colossal symbol will be a draw to many, it isn’t guaranteed. Not only that, but you are staking 50% extra on top of your bet on the chance that you will trigger the strolling staxx with a stack of symbols and NOT a colossal. So, if you trigger the feature with a stack you get the extra chance. But if you trigger it with a colossal symbol you do not get the extra chance. Bear this in mind when choosing to use the bonus bet, whilst it may be something that you like the idea of it won’t always pay off.

January 14, 2020 Boku Slots Comments Off on Santa vs Rudolf