Deep in the dark forest there looms an old manor house that goes by the name of Wraith Manor and it has lots of secrets hidden within its walls. Microgaming have been brave enough to open the doors to the manor once more and allowed us access. A Dark Matter is filled with gloomy, eerie designs and sounds, but there is nothing gloomy about the features that have been packed into this slot. Read on below to find out more about what is hidden in the manor for you. 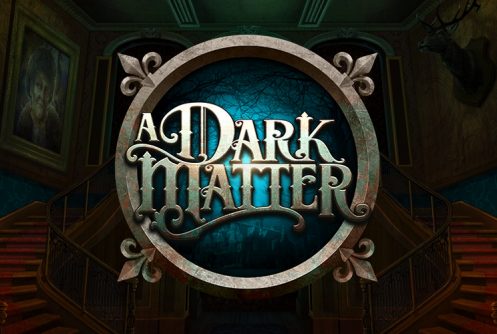 Play A Dark Matter on any of these top casino sites;

A Dark Matter is a 5-reel, 5 fixed pay line slot offering players an RTP of 96.18% and three features to enjoy. The reels are set at the entrance to the manors drive and in the background is the dark woods surrounding Wraith Manor. Even the character symbols in the game have an air of doom and gloom surrounding them. Higher paying symbols are the five main characters, the spectacled man, the old lady, the police officer, the young lady and the grumpy gardener. Lower paying symbols are the A, K, Q, J and 10 usually found on playing cards, but given some ornate design to fit in with the Victorian theme. In keeping with the overall feel of the game, there is an eerie soundtrack playing along as the reels spin.

Bet Amounts – Betting begins at 5p per spin and can be increased up to £50 per spin, which makes A Dark Matter more affordable per spin than some others. To amend your bet, you need to click the three lines directly above the spin button. This will open the bet screen where you can choose to amend the sliders on the coin value or coin size. Alternatively, you can select one of the bet amounts showing to the side of the sliders. Either way, once you have reached your desired bet, simply hitting the spin button will return you back to the game.

Wild Symbol – Your wild symbol on A Dark Matter is the games logo and it will substitute for all other symbols except the scatter. The logo wild symbol will only appear on reels 2, 3 and 4, but there are a few sneaky wild surprises in store. Read on to find out about the wild features and how they are going to help you in the game. 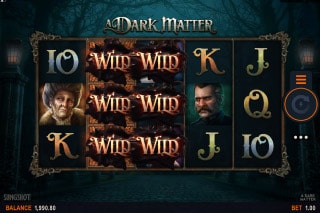 Stacked Wild Feature – The wild symbol can appear stacked on reels 2 and 4 only. You can land stacked wilds on both reels at once or individually. This is triggered at random and can happen on consecutive spins too!

Invading Wilds Feature – Land a full stacked wild on reels 2 or 4 and sometimes creeping hands will reach over to the next reel. Once they reach the adjacent reel, all positions on that reel will also be turned wild. But, land a stacked wild reel on both reels 2 and 4 to be awarded a fully stacked wild reel on reel 3 too.

Bonus Spins Feature – Having landed three or more of the door knocker scatter symbol on reels 2, 3 and/or 4, you will now enter the bonus spins feature. You will be allocated with 12 bonus spins to play through with stacked wilds present on every spin. Landing a stacked wild will also award a x2 multiplier to any wins they help to form. The bonus spins feature can’t be retriggered, but thankfully the developers of the game have added in a nice little twist. Every time you land a scatter symbol you will be allocated with one extra spin to your total, with no limit to the number of extra spins you can receive.

A Dark Matter may be simple in design, but it certainly doesn’t lack the playability factor. The three features work really well and as the x2 wild features actually work in conjunction with each other, it just adds a little something extra to the whole feel of the game. The creeping hands in the invading wilds give a spooky feeling to the game, like there are ghosts waiting to creep out of the screen at any given minute. We would have liked to have seen more animation and maybe a feature pick game travelling from room to room. But that being said A Dark Matter on the whole is a lot of fun despite all the doom and gloom that is exuded from every corner.