The realm of Asgard is well known amongst all ages, due to some recent blockbuster movies pertaining to the characters of Thor and Loki! But we aren’t here to talk about those, we want to talk about Yggdrasil Gaming’s Age of Asgard. Not only is it packed full of stunning graphics, but it is feature filled too. So, let’s get off to the cold Scandinavian mountains and warm our hands by the fire, before we get spinning those reels. 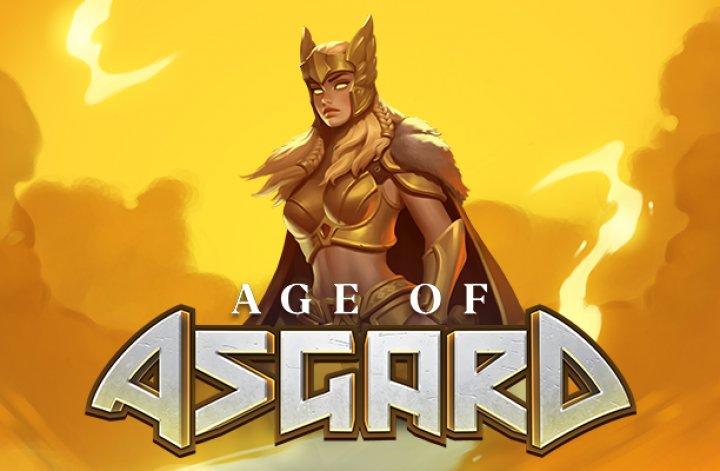 Play Age of Asgard on any of these top casino sites;

Age of Asgard is a 5-reel slot that actually has x2 sets of reels, one above the other. Each has 20 pay lines active on them, making a total of x40 fixed pay lines. The game offers an RTP of 96.20% and four interesting features to keep players engaged and entertained. Your reels are set out inside a cabin in a Scandinavian mountain village covered in snow. There is a blue fire to the right of the reels and an orange fire to the left, which mimics the colours on the split reels inside the cabin structure. The bottom set of 5 reels is coloured blue with the top set of 5 reels coloured orange.

Symbols feature a range of Asgardian characters and images that look Viking in theme. Higher symbols are the three Asgardian women and three monsters in the form of a snake, demon and troll. Lower symbols are the x8 Viking symbols, four of which are carved on orange looking wood and four on blue coloured wood. You may notice that the symbols are the same except for one small detail, the four blue wooden symbols are upside down compared to the orange wooden symbols. There is one connection between Age of Asgard and the movies that made it hugely popular today and that is the blockbuster of a soundtrack that is playing whilst the reels spin. This makes you feel like something epic is about to unfold with every spin of the reels.

Bet Amounts – Betting on Age of Asgard begins at 20p per spin and can be increased up to the maximum of £200 per spin. This can be done by using the plus and minus symbols on either side of the bet amount, until you reach your desired bet per spin.

Wild Symbol – There are two wild symbols in play on Age of Asgard, one for the top set of reels and one for the bottom. The top reel wild is a woman clad in gold with a hat that has golden wings on it and the bottom reel wild is a werewolf chained up and also surrounded in golden hues. Both of the wild symbols are stacked and can land fully or partially on the reels, helping to form wins. They will substitute for all other symbols except the scatter.

Scatter Symbol – Your scatter symbol on Age of Asgard is a golden square with etching and the words free spins engraved on it. You need to land three or more of the scatter symbol on either of the top or bottom sets of reels to trigger the bonus spins.

Wild Respins Feature – Landing any wild symbol fully stacked on either the top or bottom reel set, will trigger this feature. It will lock into place and award a single respin of all reels top and bottom. If you land another stacked wild during the respin the process is repeated, awarding another respin until no new stacked wilds land on the reels and normal play resumes. 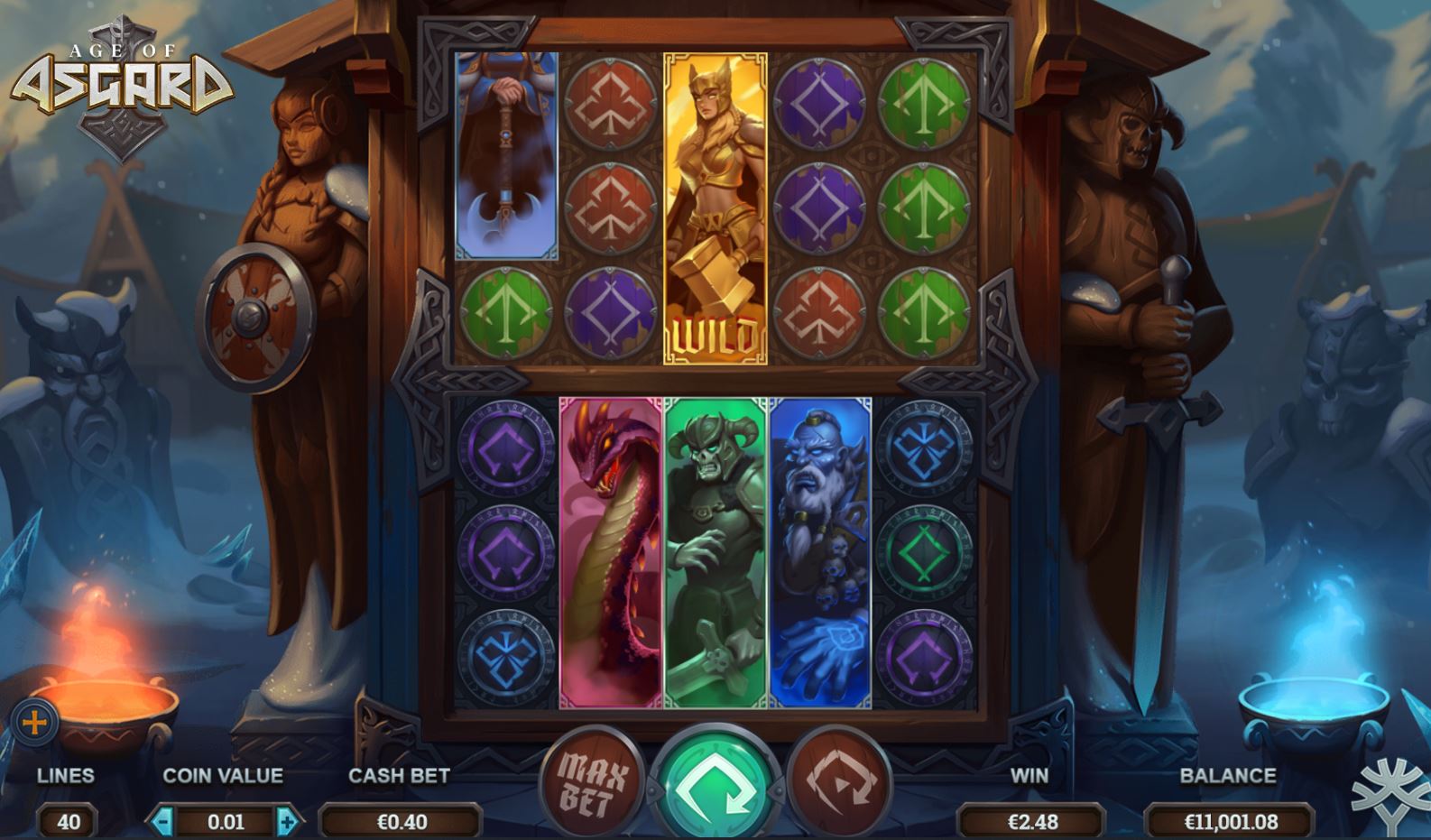 Clash Bonus Feature – If you land a fully stacked wild symbol on the same reel on the top and bottom set, then you will trigger this feature. Up to x4 random small wild symbols will be added to both the top and bottom reel sets. If the wild symbols that are added land on the space occupied by a high value symbol, then the whole of the reel will be transformed into a wild as well. The wins will be calculated once all the wilds have been added to the reels and then added to the balance.

Bonus Spins Feature – Landing three or more of the scatter symbol on either the top or bottom reel set, will trigger the bonus spins feature for you. Whichever reel set had the three symbols on will now expand to six rows and x50 pay lines and x10 bonus spins will be awarded for that reel set only. Once you begin your spins on the allocated reel set, the other reels will remain stationary until the whole bonus spins feature has played through. You are also awarded the wild respin feature here, which gives players a couple of extra chances at winning big during the round. But land x6 scatter symbols and the whole reel set becomes one and you will get a whopping x20 spins to play through. All lower symbols will be removed from the reels during these spins and the wild respin feature is active here also.

The Randomiser Feature – This is an interesting addition to the game and gives players an extra chance of bagging a big coin win or triggering the x20 bonus spins. To do this you need to land x3 scatter symbols on the top reel set and x2 scatter symbols on the bottom reel set. A wheel will appear with x4 coin sections and x4 bonus spins sections. The wheel will spin and land on one of the x8 sections and if it lands on the coins, you will be awarded a cash sum. But if it lands on the spins you will enter the x20 bonus spins feature immediately.

Age of Asgard is an extremely playable game and huge amounts of fun. The fact that it is split between two reel sets that work both separately and in conjunction with each other, really gives it an extra edge. There are plenty of main game wins coming thick and fast on both reel sets, thanks to the multitude of wilds and features connected to the wilds. It was fairly easy to trigger the bonus spins on a single reel set and slightly harder to get them on both, but not impossible. Yggdrasil Gaming have once again taken a theme, ran with it and thrown a little extra on top, always keeping the players in mind with all they create. It is a little more complex than normal, but once you realise how the features work and have played through Age of Asgard, everything soon falls into place.

Jungle Spirit: Call of the Wild

September 6, 2018 Boku Slots Comments Off on Jungle Spirit: Call of the Wild