As far as the Egyptian theme goes there have been some great and not so great slots developed. This next one we think is going to be in the great slot list and you have Quickspin Gaming to thank for that. Golden Glyph is packed full of gorgeous imagery and has quite an in-depth feature too! 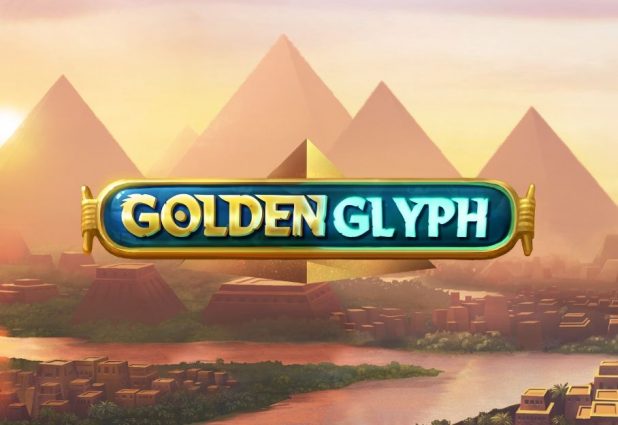 Play Golden Glyph on any of these top casino sites;

Golden Glyph is played out on a 7×7 grid and offers an RTP of 96.19%. There is also the addition of the amazing avalanche reels, so read on below to find out how that works. Your reels are set against the glorious pyramids of ancient Egypt and the villages below them. The reels also have a wheel of fortune style addition to the left, which we will go into more detail about further down.

Symbols include hieroglyphs and various Egyptian gods, and occasionally flocks of birds fly across the landscape too. Higher paying symbols are the Egyptian gods based on red, blue and green squares, and lower paying symbols are the hieroglyphs depicting a snake, the ankh, the eye of Horus and water. There is a great soundtrack in Golden Glyph, which is enhanced by awesome noises as the reels land and as the wheel spins too. It does make for a loud noisy game overall, but you can always switch it off if you want.

Bet Amounts – Betting begins at 20p per spin and can be increased up to £100 per spin. You can find the bet amount on the main row under the reels and there are arrows which are used to adjust the bet. Click the arrows up or down to increase and decrease the bet amount until you are happy to continue playing the game.

Wild Symbol – A large golden square with the letter W engraved upon it is your wild symbol. It will substitute for all other symbols in the game to form a win, except for the wheel of fortune feature symbols.

Scatter Symbols – There is no scatter symbol in Golden Glyph, but this is not an issue as you will find out when you trigger the wheel of fortune.

Cluster Pays – Golden Glyph has a cluster wins way of working, which means there are no generic pay lines in play. However, you need to land x5 or more symbols in a cluster either horizontally or vertically to bag a win.

Avalanche Feature – This is always a welcome addition to any game and even more so when cluster pays are in play too. Every time you land a winning cluster it is removed from the reels and the remaining symbols drop into their position, with fresh symbols dropping in from above to fill in any gaps. This process will continue until no new matches are made, but it means you can sometimes land multiple wins from a single paying spin, if the reels land in your favour.

Power Wild Feature – Every time you land a winning combination you will be awarded a power wild symbol. This is depicted by a gold square with a blue orb in the centre of it and it will appear in one of the symbol positions of the winning combination that led to it being awarded. The power wild remains in place on the reels if you trigger the avalanche and if it is used as part of another win it will trigger the wheel of fortune bonus. But when it is awarded it does not contribute to a separate win, instead you will lose that symbol when you make your next spin.

Wheel of Fortune Feature – As you will see there is a wheel at the side of the reels, and this spins away constantly. However, for it to award one of the features it holds, you need to land that power wild symbol. It then needs to contribute towards a win in order for one of the features below to trigger.

As the wheel spins on each spin of the reels, you may be awarded any one of the above features. However, if you trigger the bonus reel consecutively you begin on the first symbol positioned next to the reels, then are awarded the next symbol and so on. If you trigger the wheel of fortune feature x4 times the next bonus symbol will always be the bonus spins feature, and this is always on the fifth consecutive trigger of the wheel.

Whilst Golden Glyph looks complicated when you first enter the game, it’s actually really simple and lots of fun to play. The sounds can get a bit overbearing after a while, but that’s easily remedied by hitting the mute button. Wins happen fairly often thanks to the combination of the cluster pays and the avalanche, and that’s always going to draw a crowd of happy players. The feature however is a little more difficult to trigger, as the only way to do this is first by landing the power wild and then having it form part of a win on an avalanche. This means if you land a win but then your power wild doesn’t land right in the next avalanche, you don’t trigger the feature. That’s not to say it doesn’t happen because we triggered the power wild and the wheel of fortune on numerous occasions. We only managed to get into the bonus spins once during our time playing, but it was certainly worth the wait. Overall Golden Glyph is a game you have to be in for the long run if you are determined to play into the bonus spins. Make sure your balance can sustain that kind of long term waiting though, otherwise you will burn through funds rather quickly.