You have watched the madness unfold on the screen and now you can play along as well. All thanks to the team at Microgaming who decided that even though the saga is over, that doesn’t mean it has to end. All hail Game of Thrones 15 lines and all who decided to play along with houses Stark, Targaryen, Lannister and Baratheon. 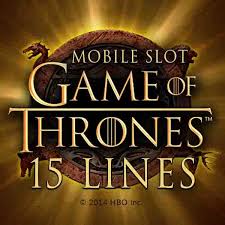 Play Game of Thrones 15 lines on any of these top casino sites;

Game of Thrones 15 lines is a 5-reel, 15 fixed pay line slot that offers players an RTP of 95.01%, which on the face of it doesn’t seem high for Microgaming. That being said, when the game is in play you may find that the low RTP doesn’t have as much of a negative impact as you would think.

Your reels spin to the title soundtrack from the tv series itself, which makes for very atmospheric gameplay. The symbols are a mix of family crests from the programme and your usual card suits, which look like they have been carved from stone.

Bet Amounts – Betting begins at just 15p per spin and can be increased to a maximum of £15 per spin, making Game of Thrones 15 lines very affordable all round. Bets can be amended by changing both the coin amount and coin level to reach your desired stake.

Wild Symbol – Your wild symbol is the Game of Thrones logo and luckily for you it is also a stacked wild in this game. It will substitute for all other symbols except the scatter and appears stacked in both the main game and during the bonus spins as well. On top of all that you will see that the wild is also the highest paying symbol in Game of Thrones 15 lines, offering a win of 1000x coins for landing 5 on a winning line. 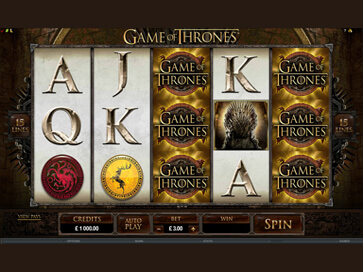 Scatter Symbol – The iron throne is your scatter symbol and will award scatter wins if you land a minimum of x2 or more symbols anywhere in view. Land three or more however and you will trigger the bonus spins round, as well as receiving your scatter win for that round as well.

Gamble Feature – Game of Thrones 15 lines offers a slightly different gamble feature than you would normally come across. After each win you will be offered the chance to gamble. If you choose to do this you risk losing the amount you have just won, so be sure you want to do this before hitting the gamble button. Once you hit the gamble, you are taken to a new screen which offers a map showing four destinations. You will be offered the choice of picking heads or tails to double your money, but pick incorrectly and you will lose and be returned to the game. Should you pick correctly however, you will move to the second destination on the map to double your current win, and so on for each of the four places on the map. Once you have made it to the final destination and have won, you are returned to the game.

Bonus Spins Feature – Having landed three or more scatters on Game of Thrones 15 lines, you will activate the bonus spins feature. Here you will be given the choice to pledge allegiance to one of the four houses, either Stark, Lannister, Baratheon or Targaryen. Each one offers a set amount of spins with extras as shown below:

You get to choose which option you want to have running during the bonus spins round, so choose wisely. The bonus spins can be retriggered from within the feature and wilds are stacked here too.

Whilst we were excited to play Game of Thrones 15 lines, it was a little anti climatic for us as we expected something more. Although the gamble feature was interesting it’s not something we would choose to do, so it was a bit redundant in our eyes. More relevant features within the body of the main game would have been more inviting for players, but unfortunately there is just the bonus spins to look forward to. That being said, being able to choose your house when entering the bonus feature was a bit of fun, and we liked the fact that the spins could be retriggered too. Wins during the main game were sporadic at best and the big money is to be had in the bonus round, which thankfully didn’t take too long to trigger.