If you haven’t already heard of this next character, you must have been living under a rock. Anchorman: The Legend of Ron Burgundy is a film that took the world by storm. But the fun doesn’t end just because the credits rolled. Thanks to the team at Bally Technologies now you can access Ron in all his craziness from the palm of your hand. We are sure he would find the irony in that somewhere because we did! 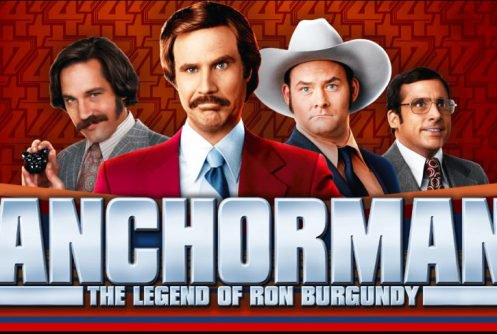 Play Anchorman: The Legend of Ron Burgundy on any of these top casino sites;

Anchorman: The Legend of Ron Burgundy is a 5-reel, 25 fixed pay line slot. It offers players a whopping 96.03% RTP and a couple of fantastic features as well, you lucky dogs! As it sits the reels look very basic but have the design theme from the movie running through. With the Anchorman cast sitting proudly atop the reels and the 70’s news team logo in the background. There are four high paying symbols in the form of the characters from the movie, Ron Burgundy, Champ Kind, Brian Fantana and Brick Tamland. Your lower symbols are made up of Baxter the dog, a glass of whisky, sunglasses, a hat and of course the news teams van.

Bet Amounts – Betting on Anchorman: The Legend of Ron Burgundy begins at 75p per spin and can be increased to a massive £150 per spin. You will see the bet amount in the lower right hand of the screen. To adjust your bet hit the plus or minus until you reach your desired stake and away you go.

Wild Symbol – In keeping with the theme of slapstick humour and sheer obvious puns, your wild symbol is the words ‘This Is A Wild’! It will substitute for all other symbols except the bonus symbol.

Bonus Symbol – Again heading down the obvious road, your bonus symbol is an arrow with the word ‘bonus’ written along it. Land three of the bonus symbols on reels 2, 3 and 4 to trigger the big bonus feature.

Mystery Stack Feature – Triggering at random in the base game only, each reel will reveal a number of places that will receive matching symbols. All symbols except the bonus can potentially appear here meaning chances of bigger line wins are in play. Wins formed during the mystery stacks feature are paid out at the same pay out level as a normal base game win, it just enhances your chances of winning.

Ron’s Reels Feature – Also triggering only in the base game is this feature. Ron’s Reels will change random symbols into the wild, Ron, Baxter, the whisky glass or Ron’s hat. This feature still brings with it higher wins potential, but not as much as the mystery stack feature due to the limited number of symbols being switched. Pay-out is the same as a normal base game win, but again because reel positions are filled with matching symbols, your chances of winning big are increased. 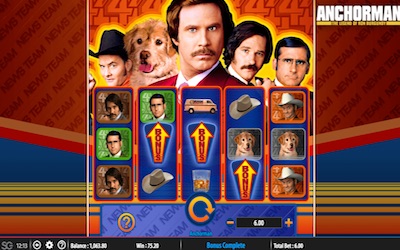 Baxter’s Wilds Feature – You will know when this has triggered due to the video clip that launches prior to it. But just so you are aware, it will only trigger if the mystery stack, Ron’s reels, or x3 bonus symbols haven’t landed. It is random as well, so it is not guaranteed to land just because the bonus features didn’t trigger. But if it does activate you will be allocated with between 3 and 10 wild symbols on reels 2 to 5, and any wins will be recalculated once they have been placed.

Big Bonus Feature – Three bonus scatter symbols on reels 2, 3 and 4 will trigger the big bonus feature on Anchorman: The Legend of Ron Burgundy. You will be taken to the bonus reel and asked to hit spin, then whichever of the six bonus features you land is what you will play.

Anchorman: The Legend of Ron Burgundy is such a fun game to play whether you are a fan of the movie or not. The combination of 70’s music, video clips from the movie and sound bites make the game that little bit more enjoyable. What about the mass of extras included though, there is a total of four main bonus features with the big bonus giving 6 variations of ways to win! If that doesn’t make you smile, we don’t know what will. On top of the potential jackpot wins there are plenty of base game wins to be had and they certainly happen fast enough. Most wins seem to play out at the lower end of the scale, but we did land some bigger wins too, they just took a little longer. If you haven’t played Anchorman: The Legend of Ron Burgundy Slots or watched this movie then you have some work to do friends. Bally Technologies, we raise our whisky glass and tip our hats to you, what a great game you have created!