The Mexican holiday Día De Los Muertos is a group of days throughout October and November where the dead are celebrated and remembered. This is often a great source of inspiration for game developers too. One such game creator, Side City Studios has taken the theme and created a stunningly visual slot game for you to enjoy. Fortunes of the Dead centres around the theme and the bright joyful side of the holiday. 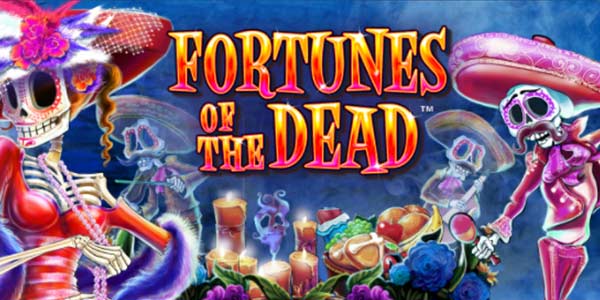 Play Fortunes of the Dead on any of these top casino sites;

Fortunes of the Dead is a 5-reel, 50 fixed pay line slot offering a cool RTP of 95.79%. It combines bright colourful graphics with some amazing features, which will certainly entertain you whatever the time of year. Set against a graveyard backdrop (that’s about the spookiest part), the symbols spin in reels surrounded by flowers and golden filigree designs.

When it comes to the symbols each of them is as colourful as the next and are all in keeping with the theme. Higher value symbols include the Fortunes of the Dead logo, a female skeleton, a skeleton mariachi band and a male skeleton. Lower value symbols take inspiration from things found graveside in remembrance of the dead, such as a burning pot, a gold coin, a fruit bowl, skull candles and red candles.

Bet Amounts – Betting on Fortunes of the Dead begins at 50p per spin and can be adjusted to the maximum of £50 per spin. To adjust your bet, click the coin icon just below the spin button and then simply choose your stake from the options available.

Wild Symbol – A matador skeleton with a bull behind him is the wild symbol in Fortunes of the Dead. He will substitute for all other symbols except the scatter and the bonus, he is also your joint highest paying symbol along with the logo. Land 5 of the wild symbols on a winning line to bag a hefty x500 coin win.

Scatter Symbol – Your scatter symbol is a skeleton riding a horse, which makes absolute sense doesn’t it? Landing three of the scatter symbols on reels 2, 3 and 4 will trigger the bonus feature for you.

Bonus Symbol – Not happy with a special wild symbol and scatter, Side City Gaming added an extra symbol for you. Land three of the horned skull symbols anywhere on reels 1, 3 and 5 to trigger this extra feature. 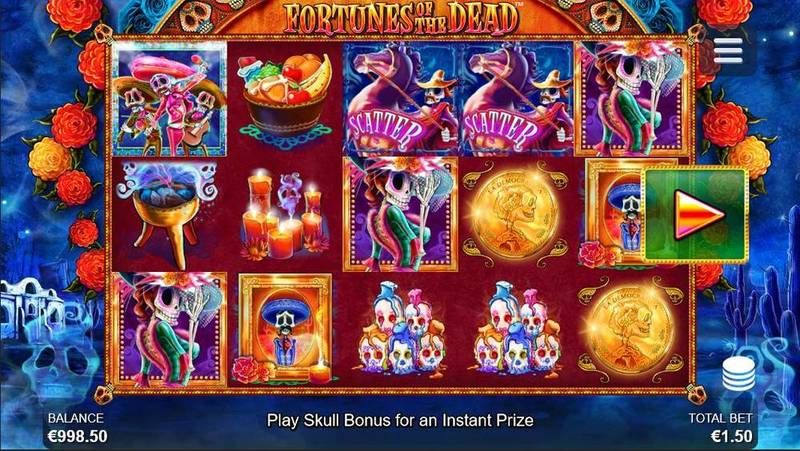 Once in a wild Feature – At any point in the game on any spin you may be allocated this feature. You will be given one bonus respin of the reels with four wilds added at random. The game offers you a guaranteed win on this feature of at least 50% of your line bet amount! This feature is not active in the bonus spins round.

Skull Bonus Feature – This is a fairly simple pick-up game, land three horned skull symbols on reels 1, 3 and 5 to trigger it. Your next job will be to choose one of the three skulls that landed and who will reveal your prize. Each skull will have a cash sum held behind it but choose your skull wisely.

Bonus Spins Feature – Landing three or more of the horse-riding skeleton will trigger the bonus spins round for you. The symbols need to have landed on reels 2, 3 and 4 to activate and once done you will be allocated 5 bonus spins. On each spin in the round a wild will be added at random to the reels. Luckily for you, it will remain in place until the round has finished. This means that by the last spin you will have collected 5 locked wilds on the reels! Bonus spins cannot be retriggered within the round.

What a game Fortunes of the Dead turned out to be, great animations and we love how the skeletons dance around when a win is formed. Even the music is energetic and adds to the whole atmosphere of the game, making it much more enjoyable. Fast paced wins land often in the base game and the features triggered often too. Fortunes of the Dead is one of those games that is based around a certain time of year but works all year round. With the low RTP that this game has, we didn’t expect too much from it if we are being honest. But combining all the above with three interesting bonus games which are all interwoven with each other, we were greatly surprised.