It’s time to go old school with this next slot and it’s back to basics in many ways. Super Hot Fruits is a retro themed slot from Inspired Gaming. However, don’t be fooled by its overly simplistic look, there is more to Super Hot Fruits than meets the eye. It offers an interesting bonus spins round coupled with some in feature extras. Giving an old school game a modern twist and bringing it up to date for players. 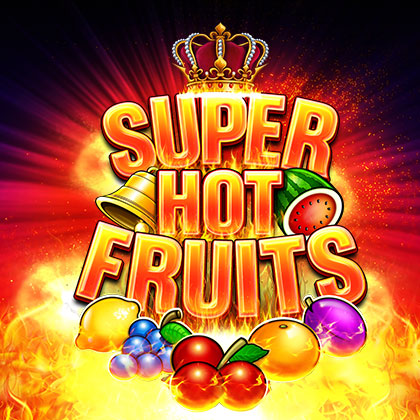 Play Super Hot Fruits on any of these top casino sites;

Super Hot Fruits is a 5-reel, 10 fixed pay line slot that offers a 94% RTP to players in the main game, but an impressive 100% RTP in the feature! It is set out to look like old fashioned slot machines that you would have found on the casino floor back in the day. With a bright red background, flames licking the reels and of course let’s not forget those fruits! The tune that plays along as the reels are in motion can get somewhat annoying, so we switched off in the end.

Bet Amounts – Betting on Super Hot Fruits begins at 10p per spin and can be increased up to the maximum of £100 per spin. Your total bet amount is shown below the reels in the centre and you simply use the arrows on either side to adjust your bet.

Other Symbols – All of the symbols on Super Hot Fruits are synonymous with fruit machines. Higher value symbols are the crown, 7’s, watermelon, bells, plum and grapes. With the lower values being the lemon, orange and cherries. 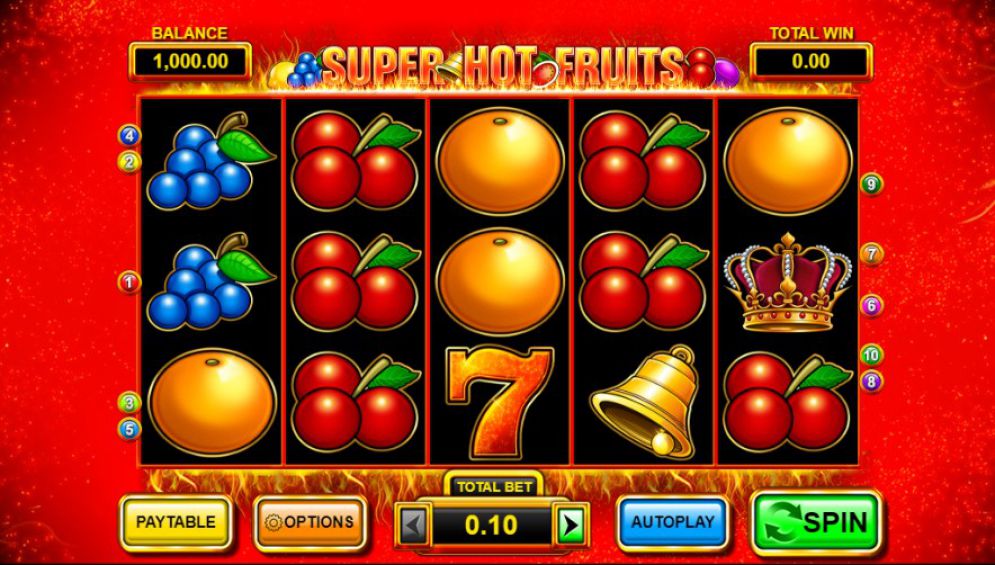 Hot Spins Feature – This is where things begin to really heat up. To enter the feature, you need to land a win that awards x4 or more your bet amount. You will be taken to a new screen on which you will see 4 sets of reels. You have the choice of simply collecting the winnings you have just won or playing the hot spins with those winnings in the hope you can bag a bigger prize.

If you decide to play the hot spins feature you will see that your stake has been set already, to enable you to receive the most hot spins possible. You get to spin each reel set one time per paid stake amount, but if you change the bet you will see the number of hot spins you can play will change. At the end of every Hot Spin you can choose to cash out your winnings or to play again.

During the round the wild is active and will appear stacked on reel 3 only, on each of the reel sets. If you land a stacked wild on the centre reel of any set, it will then replicate onto the centre reel of any remaining reel sets that are left to spin. The RTP during the feature is increased to 100% which when combined with the stacked wilds gives players a huge leg up during the round. There is a limit however to the number of spins that can be played consecutively during the round which is 50 spins! But that’s 50 spins of all 4 reel sets on screen, giving players a whopping 200 reels spins in total. Dependant of course on you managing to bag a win big enough to award 50 hot spins in the beginning!

Ok so at first glance Super Hot Fruit looks like it doesn’t offer much by way of intensity does it? But, once you start landing those wins that trigger the feature, that’s when it gets interesting. It is entirely the choice of the player as to whether you play the Hot Spins feature or not. Our advice would be to at least play one round of the spins. After all, with a 100% RTP and the stacked wilds active the profit potential is pretty high, and you can always cash out at any time. Overall the game itself did get a bit tired after a while. Especially as the sound needing switching off in order to enjoy the game play that little bit more. So, this would be the only downfall of the Super Hot Fruits. But, for a quick-fire game to kill time it’s one to add to your list, even though it doesn’t have the best graphics or design work. What it lacks in those areas it makes up for in the wins, so we’ll definitely be visiting this game again.

May 9, 2018 Boku Slots Comments Off on Frankenstein