When you think of mining it doesn’t always conjure up the idea of riches and gold. But with this slot from Big Time Gaming you are digging for diamonds and much more. It is time to descend below ground and enter the Diamond Mine Megaways slot. Hope you have brought your hard hat, torch and pickaxe with you? 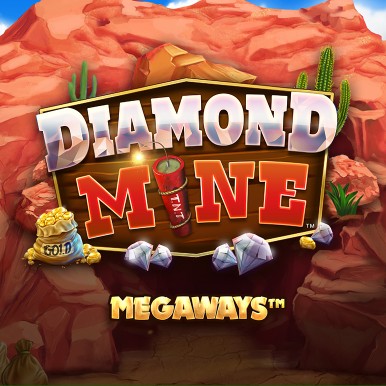 Play Diamond Mine Megaways on any of these top casino sites;

Diamond Mine Megaways is a 6-reel slot that offers players a whopping 117,649 ways to win and an RTP of 96.43% as well! As the games title suggests it is based inside a mine and your reels look like they are set inside a mountain. Symbols take inspiration from the theme too with things like an axe, torch and even an old miner. Higher paying symbols are the diamond, miner, torch and axe. Lower paying symbols are the A, K, Q, J, 10 and 9, and all the symbols appear on the reels as if carved in rock to give it that extra bit of mining flare. As the reels spin there’s a jaunty western sounding track playing along. Alongside that there are explosions each time a symbol is removed as part of a winning formation!

Bet Amounts – Betting on Diamond Mine Megaways begins at just 20p per spin and can be adjusted up to the maximum of £100 per spin. You will find the bet amount to the left-hand side of the reels with an arrow above and below it. Use those arrows to increase or decrease your bet amount until you are satisfied with the bet that is showing.

Wild Symbol – A pack of dynamite is your wild symbol which is fitting considering the theme of the game. It will substitute for all other symbols in Diamond Mine Megaways except the scatter and mystery symbols.

Scatter Symbol – Your scatter symbol in Diamond Mine Megaways is a sack of gold. Landing four or more of the scatter symbol anywhere on the reels will trigger the feature.

Megaways Wins Feature – Megaways wins work slightly different to your usual slot set up. Wins are awarded from left to right as long as symbols are on adjacent reels. There is an extra row of 4 symbols above the standard reel structure which help to increase the potential pay lines. 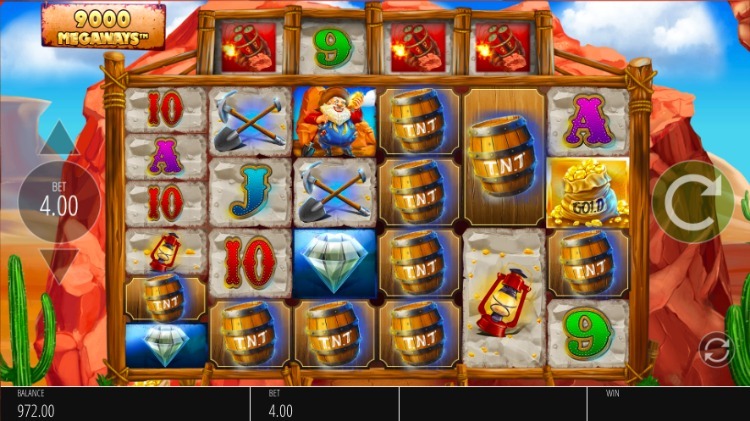 Cascading Symbol Feature – Sometimes known as symbol drop or the waterfall feature, this addition to the Diamond Mine slot certainly makes things interesting. Each time you form a winning combination those symbols will be removed from the reels. New symbols will fall into their place and if you are lucky create a new win. The cascade of symbols will stop once no new wins are formed by the symbols dropping into place.

TNT Mystery Feature – Not happy with the usual wilds and scatters, Big Time Gaming have added an extra symbol to help things along. Depicted by a barrel of TNT the mystery symbol can appear on any reels at random. When it does land it will immediately transform into one of the symbols showing on the reels already in an attempt to help create a winning combination.

Bonus Spins Feature – Land yourself four or more of the bags of gold scatter symbol to enter the bonus spins feature. You will be awarded 12 bonus spins for landing 4 scatters on the reels, and 5 extra spins for each consecutive scatter that is present when the feature triggers. Inside the bonus spins round each time you make a successful cascade by landing a winning combination, your prize multiplier increases by x1 on each consecutive cascade. This provides players a much bigger win potential within the round. If that wasn’t enough every time you land x3 or x4 scatter symbols on the top reel you will be awarded with x5 or x10 extra spins on your total.

Diamond Mine Megaways is an exciting game to play with wins coming in from all angles thanks to the cascade feature. On paper a mining game can seem quite dull, but if you open up this delight from Big Time Gaming you will see it is so much more. The addition of the mystery TNT symbol really helps things along. It doesn’t land as often as you would like, but when it does it almost always helps to contribute towards a win and after all that’s what we are after isn’t it?