Rainbows and leprechauns all evoke feelings of hope and luck, so it’s time to head to the emerald isle and see what is hiding at the bottom of the rainbow. Barcrest have developed yet another step in the Rainbow Riches ladder, but this one takes you straight to the heart of the leprechauns’ dwelling. With their favoured Big Bet option available and plenty of features packed into Rainbow Riches Home Sweet Home, it’s time to get playing. 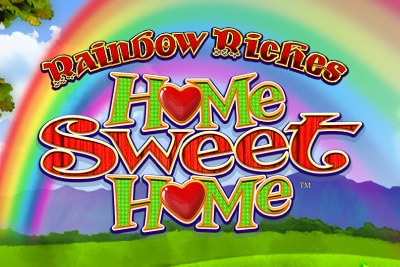 Play Rainbow Riches Home Sweet Home on any of these top casino sites;

Rainbow Riches Home Sweet Home is a 5-reel, 50 fixed pay line slot offering a variable RTP of 94% to 97.75% for players. Looking as if we have just unearthed the Leprechaun village deep in the forest, the reels spin in front of four small doors and has a lush forest surrounding them. Playing along as the reels spin is a bit of Irish pipe music which is lovely. But it stops after every spin and only starts on each new spin which we found a bit odd. All the symbols have taken a bit of design work from the Irish theme, with higher value symbols being the Rainbow Riches Home Sweet Home logo, a mushroom, violin and Celtic stone carving. Lower values are the horseshoe, harp, A, K, Q and J.

Bet Amounts – Betting on Rainbow Riches Home Sweet Home begins at 10p per spin and can be increased to a mammoth £500 per spin in the main game. You can change this by clicking on the plus or minus symbols either side of the stake amount, which is found below the spin button. There is of course the Big Bet option if you wish, which changes the way bets are made slightly. Read more about the Big Bet option below.

Big Bet Options – If you want to bypass the usual way of playing and get something extra for your money, then the Big Bet option may be for you. There are three levels of Big Bet to choose from and each one has a set cost for 5 spins with extras added on as shown here.

After you have played through each of your 5 spins and any resulting bonus games, you will be returned to the Big Bet screen. Here you can choose again or return to the main game to resume playing in the normal way. 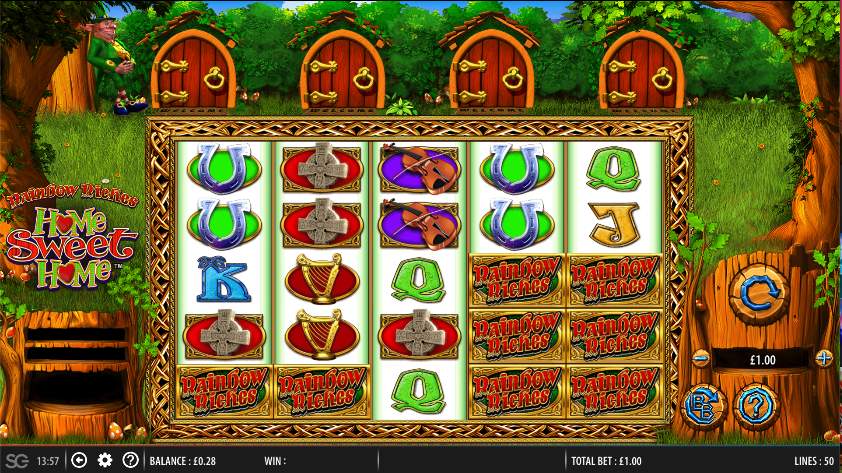 Wild Symbol – Rainbow Riches Home Sweet Home has a wild symbol which is a rainbow with the word ‘wild’ in front of it! It will substitute for all other symbols except the Leprechaun.

Knock Knock Feature – As mentioned above you will see that in order to trigger the knock knock feature, you need to land a full stacked leprechaun on reel 1. He cheekily knocks on the screen and this will activate the doors above the reels. At random any or all of the doors will be opened to reveal a symbol behind them. The matching symbols on the reels to those revealed behind the doors will now be turned wild and help to form any potential wins on the reels. If you reveal a fairy behind any of the doors, she will pick up to x5 symbols at random to be turned wild.

Bonus Spins Feature – Landing three or more of the Leprechaun symbol on reels 1, 3 and 5 will trigger the bonus spins round for you. But it will also trigger the knock knock feature at the same time, so it’s kind of a two for one bonus. You will now be allocated 8 bonus spins to play through, with any of the symbols revealed from the knock knock bonus applied to every single spin! This means if you open 1 door and reveal a harp symbol, that symbol will be switched to a wild for every subsequent spin. But, if you reveal a fairy she will turn up to 5 different symbols wild on every subsequent spin!  The bonus spins round can be retriggered as well by landing three more scatters on reels 1, 3 and 5, with no limit to the number of times this can be done.

Rainbow Riches Home Sweet Home opens up a whole new side to bonuses that you may not have seen before. The fact that the knock knock bonus can be triggered on its own and as part of the bonus spins is a definite draw for us. It means that despite the low number of spins awarded, you are going to be in for some pretty nifty wins thanks to the wild symbol switcher. Whilst it may be tempting to go with the Big Bet options we wouldn’t advise staying there. Mainly because although you will land the occasional bigger win, more often than not the wins will be smaller than the sum you paid to enter the round.