A lot of people love a good themed slot game and at Boku Slots one of our many favourite themes is the vampire world. There’s just something about the gothic designs and eerie soundtracks, that really adds to the excitement of the game. 1×2 Gaming has taken its theme from the vampire tales of old and created the interestingly named Dark Thirst, a reference to the blood drinking monsters themselves. 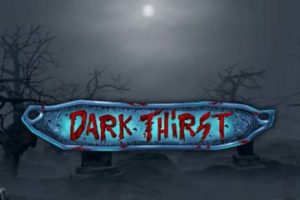 Play Dark Thirst on any of these top casino sites;

Dark Thirst is a 5-reel, 25 pay line slot game that has an impressive 97.3% RTP; enough to get your teeth into anyway.

Bet Amounts – Betting begins at 1p per pay line and can be adjusted up to 50p per pay line. You can also increase the coin level from 1 to 5, making your 1p bet amount increase to £1.25 or 50p increase to £62.50. This is of course based upon using all 25 pay lines, so bear in mind your amounts will vary if you change the number of lines in play.

Wild Symbol – Your wild symbol is a scary looking female vampire and she will substitute all other symbols, except the scatter and the bonus symbol. If you land 5 or more wilds on an active pay line you will be awarded with 7500 coins, which makes the wild the highest paying symbol in the game.

Scatter Symbol – The scatter symbol is a version of Dracula himself, a white-haired vampire that looks as though he is about to bite an unsuspecting victim. Land three or more of these anywhere on the reels and you will trigger the bonus spins feature. 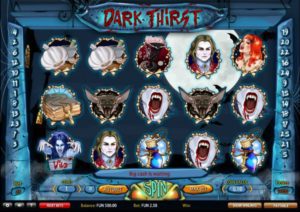 Bonus Symbol – The bonus is depicted by the ever so cheerful gravestone and if you land 3 or more, you will trigger the bonus grave digger game. The more bonus symbols you land on the reels, the bigger the prizes in the bonus game.

Bonus Spins Feature – When you have landed three or more scatter symbols, you will trigger the bonus spins feature. You will be awarded with 10 spins during the feature and it can be retriggered if you land three or more scatters during the bonus spins round. This can make the round quite lucrative, when you think that these spins can be retriggered a number of times.

Gravedigger Bonus Game – Once you have landed three or more gravestones, you will automatically trigger the bonus game. The more gravestones you land the bigger the prizes when you enter the game. You will be taken to a new screen where you will have the choice of graves to unearth. When you unearth an undead creature, you win the cash prize allocated to that grave. Unearth a skeleton and the round is over and your prizes are added to your balance.

Whilst the bonus game can be difficult to trigger, when it does land it has high earning potential. As do the extra spins and because of this we totally understand the high RTP. The graphics are a bit lacking in depth, but still fun to watch them come alive during game play.  Overall it is an easy and fun game to play through, and not quite as dark and sinister as the name suggests.

April 3, 2019 Boku Slots Comments Off on Kingdom of Cash