Coyotes and Wolves are something we have all heard of, but never did the two meet until now. Coywolf Cash is a game built on the idea that somewhere there is an animal that is part coyote and part wolf. This slot created by Play N Go is packed full of features to keep you occupied, so let’s delve a little deeper. 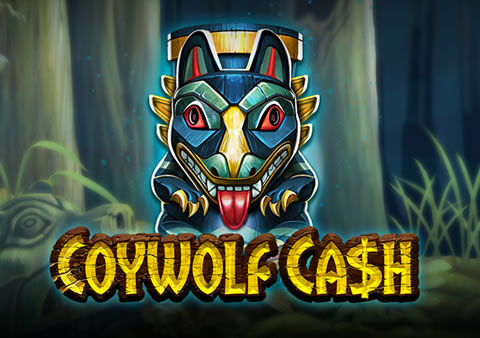 Play Coywolf Cash on any of these top casino sites;

Coywolf Cash is a 5-reel, 50 fixed pay line slot offering an RTP of 94.3% to players. Your reels are set inside a wooden carving with totem pole styled designs on either side. The reels are spinning deep in a forest scene and somewhere inside lurks the Coywolf waiting to attack. On the reels you will find a mix of symbols including animals, card symbols and totem pole style carved masks. High paying symbols are the bear, mountain lion, fox, wild cat and eagle. Low paying symbols are the A, K, Q, J and 10 each one carved from wood with a feather etched into the design. As you play through Coywolf Cash you will hear drumbeats and animals howling, which we felt added to the atmosphere of the game.

Bet Amounts – Betting on Coywolf Cash begins at 10p per spin and can be adjusted up to the maximum of £100 per spin. In order to adjust the bet, you will see a plus and minus symbol on the bottom of the reels with the various bet amounts assembled between the two. Use the symbols to move your bet up and down until you reach your chosen amount, then simply hit spin to resume the game.

Wild Symbol – There are two wild symbols in Coywolf Cash, both are almost identical aside from the colour scheme. Each wild has an image of a Coywolf on the top with the word wild beneath it. There is a brown wild and an ice blue wild, and each one will substitute for all other symbols within the game except for the scatter. The brown wild appears in the main game and can land anywhere on the reels. The ice blue wild will only appear when the scatter symbol has triggered the wild reel feature which is explained below. 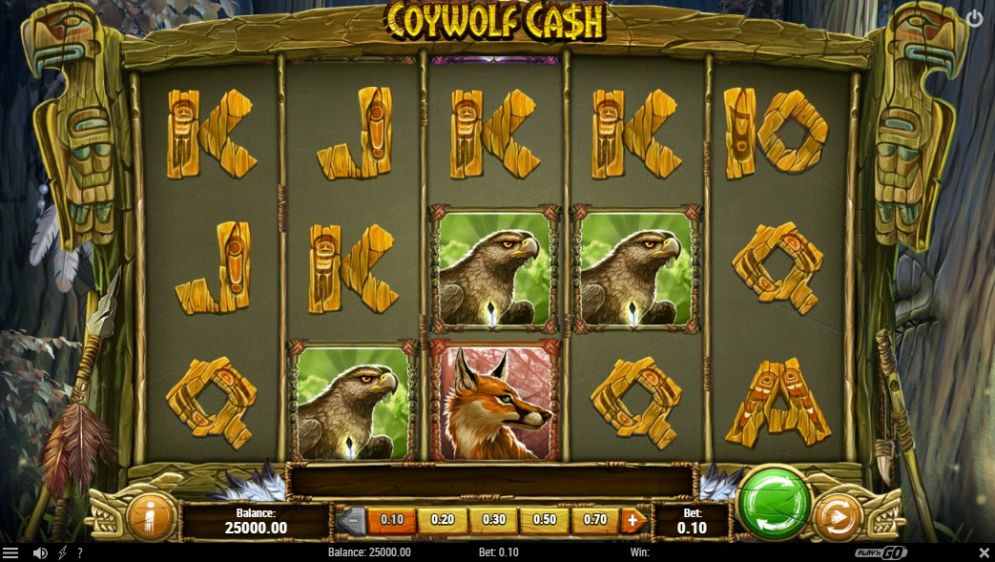 Wild Reel Feature – Having landed a single mask scatter symbol on reel three you will trigger the wild reel feature. Here you will see a new horizontal reel appear above the standard reels and inside it will be ice blue wild wolf symbols. When it stops spinning, up to x3 spaces will have blue wild symbols inside them. Those wilds will then expand down to fill the reels below them creating stacks of wild symbols. This will help create much bigger potential wins for the player whenever it lands.

Prey Bonus Spins Feature – To trigger the bonus spins on Coywolf Cash you will need to land x3 or more of the wolf totem scatter anywhere on the reels. You will be allocated a number of spins which are dependent upon the number of scatters that are present when the feature is triggered.

But that isn’t all, if you land a totem scatter on the reels during the round, you will be allocated with between x2 to x4 extra spins. As well as that you are awarded with stacked wild symbols on reels 2 and 4 on every spin!

Coywolf Cash is on the outside a complex game with a feature that takes some understanding. However, once you begin to play it becomes extremely clear and is highly enjoyable. There are regular main game wins, although these tend to be towards the lower end of the pay table. But thankfully both of the bonus features trigger easy enough and this more than makes up for the low-end wins made in the main game. We loved the way Play N Go added the extra horizontal reel into the game. It certainly added that little extra spark to what would have been a run of the mill slot.