Have you ever wanted to see President Trump and Kim Jong-Un battle it out cartoon style? Well then Boku Slots has got just the thing for you from Red Tiger Gaming. They have capitalised on the ongoing dispute between the two superpowers, resulting in Rocket Men! A cartoon style game where you will see both world leaders fight it out to be the supreme ruler. Is it in bad taste, or is it just good old honest fun? Play along with us and see for yourselves! 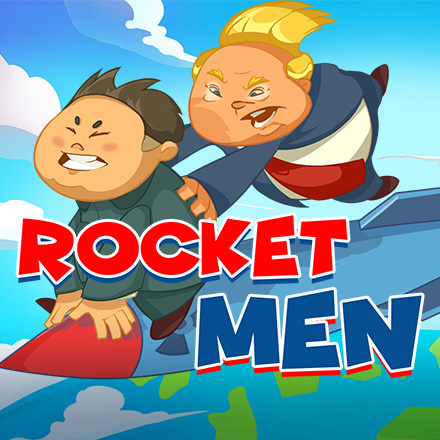 Play Rocket Men on any of these top casino sites;

Rocket Men is a 5-reel slot, offering 20 fixed pay lines and an Armageddon worthy RTP of 95.24%, for players that want to get involved. Notice the battlements to either side of the screen, because on the left-hand side is President Trumps HQ and on the right-hand side is Supreme Leader Kim Jong-Un’s HQ. It is from here they will launch their missiles amongst other things, including burgers and bricks!

Bet Amounts – Betting begins at 20p per spin in Rocket Men and can be increased to £50 maximum stake. Amend your bet amount by adjusting the arrows to the left-hand corner, until you reach your desired amount.

Wild Symbol – Nuclear bombs make up your wild symbol, one red and one blue. This double warhead will substitute for all others, except for the Don and Kim bonus symbols.

Donald Versus Kim Feature – Land a Donald Trump on reel one and a Kim Jong-Un on reel 5 and they will begin to battle each other. Items will be thrown from each respective camp until one side is defeated or there is a draw. Depending on who wins or if it is a draw, will determine which of the next mini games will take place: 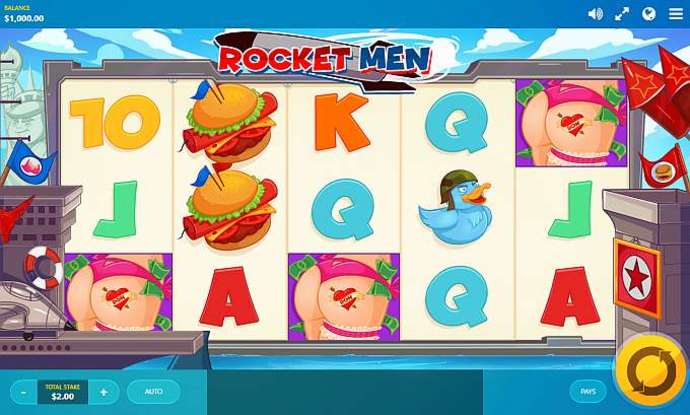 Don’s Driving Range Feature – Again for this to trigger you need to land Donald Trump anywhere on reel 1. President Trump will then whip out his golf clubs and use the reels as a golfing range. As he knocks symbols out of the way new ones will replace them and in turn complete new winning combinations. This will only trigger when Donald appears alone on reel one unlike the other games when Kim is needed on reel 5.

Kim’s Little Game Feature – As you would expect with this feature you need to land Kim Jong-Un anywhere on reel 5. Kim will then step out onto his battlement and press his missile launch button numerous times. As he does this missile will launch onto the reels and become wild symbols, potentially completing more winning combinations for you. As with the other feature it will only trigger when Kim Jong-Un appears alone on reel 5, unlike the main bonus when Donald is needed on reel 1.

Wow, when we saw this game pop up we had no idea whether it would play well or bomb out completely! Luckily for us it was actually lots of fun, though we are sure there are a lot of people that probably won’t see the fun aspect of the game. Very rarely do game designers get involved in the world of politics, but whatever your inclination you have to agree this game is well designed. The bonuses are hilarious and actually the wins come fast and quick too, even the background music was entertaining, and we don’t often find that with online slots. It’s a definite vote yes for us to keep Rocket Men around, although the poking fun side may wear thin after a while.