Playtech are pretty much one of the experts when it comes to designing slot games, so we always have high expectations when we discover a new one. This game brings in two separate genres and although it may seem a little odd at first, we’re still pretty intrigued to see what Space Digger has to offer. With two interesting bonus features and lots of clever design work, is this slot game worth digging into? 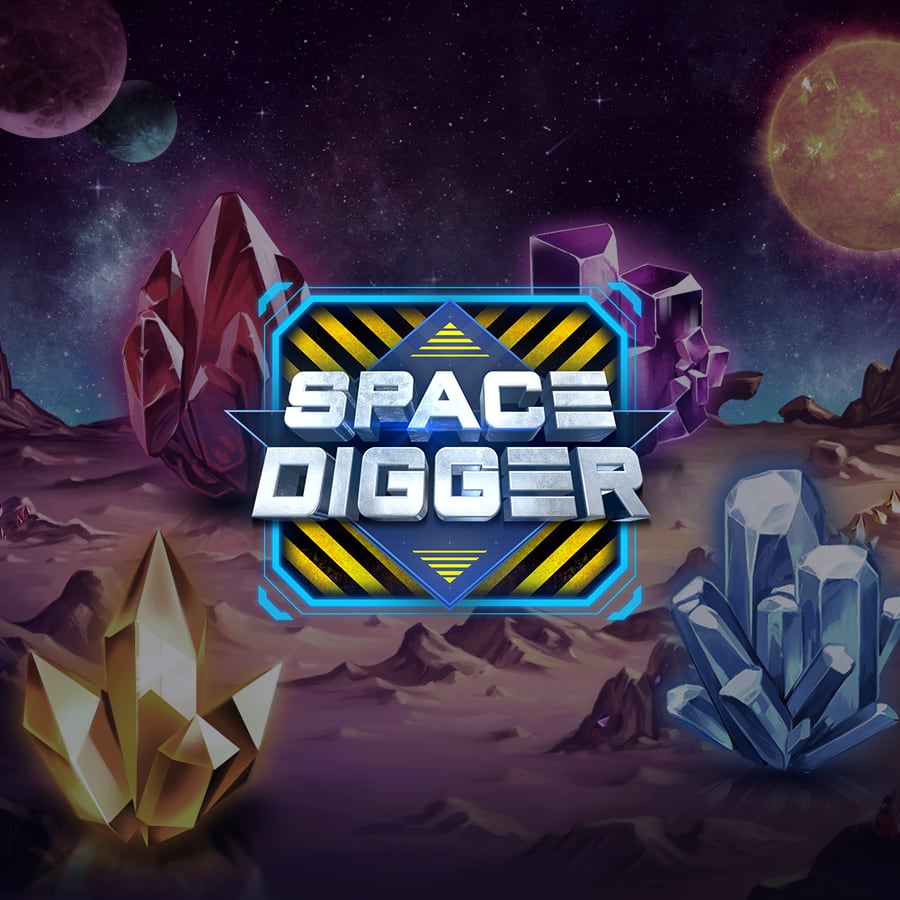 Play Space Digger on any of these top casino sites;

Space Digger is a 5-reel, 20 fixed pay line slot offering an RTP of 96.47%, for all wannabe space men and women. It is set in outer space and your reels are spinning on a planet landscape, with the galaxy in view behind them. Symbols include a range of mining equipment and gemstones, which is pretty much what you would expect from the title of the game. High paying symbols include the Space Digger logo and three mining drills in red, blue and green. Low paying symbols include the various gemstones in red, purple, blue and orange. There’s a distinctly lack lustre soundtrack playing along as the reels spin. It’s not off-putting in any way but just lacks a little something that detracts from the enjoyment.

Bet Amounts – Betting on Space Digger begins at just 10p per spin and can be increased up to £500 per spin. You can adjust your bet at any time by using the arrows on the side of the bet amount, to increase or decrease your bet until you are satisfied.

Wild Symbol – The wild symbol in Space Digger is actually a digger machine used to extract the gemstones from the planet. It will substitute for all other symbols except the scatter. The digger wild is a stacked wild and there are 2 great ways to help boost your winnings with the wild symbol in play. Read on below to find out more about those.

Scatter Symbol – A neon blue glass chamber is your scatter symbol and it has the word bonus written across it. The scatter symbol will only land on reels 2, 3 and 4, and to trigger the feature you need three or more symbols on those reels. It offers an extra pay out of x10 your bet amount on top of your line win. To grab that scatter win you need to have x5 scatters on reels 2, 3 and/or 4.

Wild Nudge Feature – Space Digger offers players a fab way to bag those expanded wild symbols too. On occasion if you land a partial wild on the reels you can be awarded a nudge. This will nudge the remaining part of the digger wild symbol into view. As a result of this the digger wild feature will now be triggered. 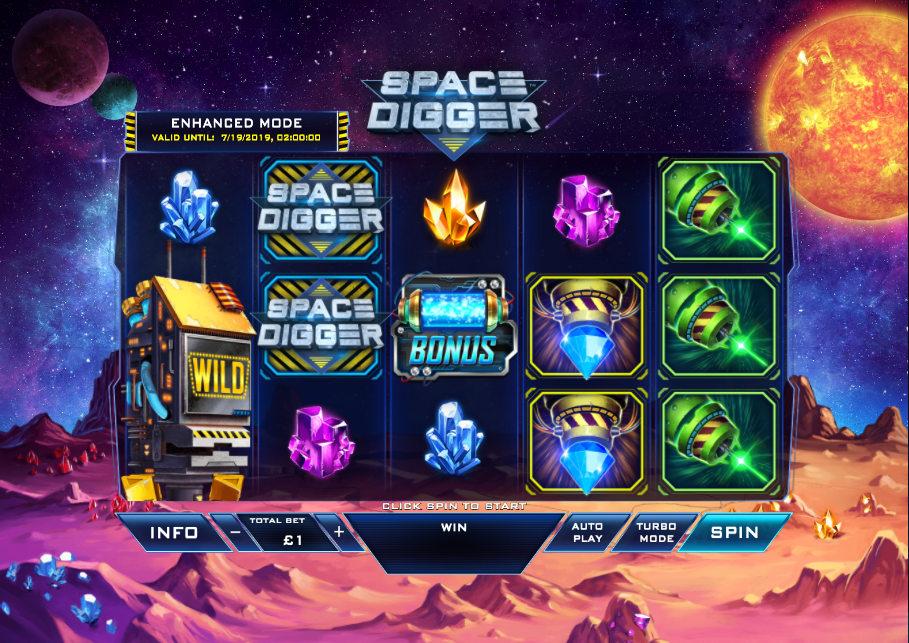 Digger Wild Feature – When the wild symbol lands on the reels fully stacked, it will trigger this mini feature. The wild will now remain on the reels moving one reel to the left on each spin, until it contributes to a win or drops off the reels the other side. There is the distinct possibility that you can end up with a full screen of wild symbols because of this feature. If you do this, you could be looking at up x250 your bet amount as a winning pay out!

Bonus Spins Feature – Once you have landed three or more scatter symbols on reels 2, 3 and 4, you will enter the bonus spins feature. You will now be awarded with x8 bonus spins to play through and some neat extras too. On the first spin of the round you will have reel 1 and one other reel turned completely wild. All wilds that land on the reels during the round will also expand and fill the reel they are on. Once a wild symbol helps to form a win it will move one reel to the right until it moves off the reels altogether. Unfortunately, there is no way to retrigger the bonus spins from within the round.

Although at first glance we didn’t know if we would like Space Digger that much, it actually won us over rather quickly. This fast-paced space adventure offers plenty of main game wins, though usually on the lower end of the pay scale. It also has some interesting features which are always going to be big draws for players. The bonus spins can’t be retriggered and only offers 8 spins for grabs. However, thanks to the wild features activated during the round, there are plenty of chances to bag bigger win combinations. Overall the pay scale for wins is low across the board, which can make people think twice about playing on this game. But wins come often enough for that to be forgiven in the long term scheme of things.

December 19, 2018 Boku Slots Comments Off on Sword of Destiny