Let us take you back to a time of big hair, neon clothes and electro music. NetEnt have taken all they know about the 80’s, to bring a touch of nostalgia back into our lives with Neon Staxx. A game that looks like it was literally ripped from the arcades of our youth and deposited into the mobile handsets of the current day. 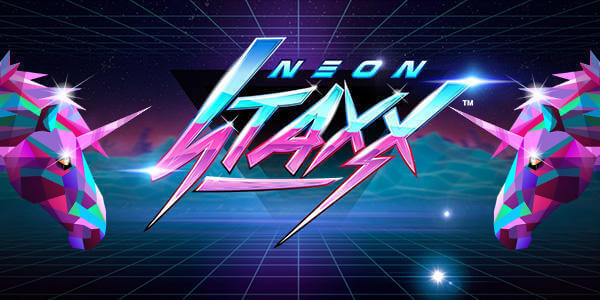 To play Neon Staxx you can head to any of these top casino sites;

Neon Staxx is a 5-reel, 40 fixed pay line slot that offers a cool 96.9% RTP for players. With transparent reels that spin against an almost Tron like background, the game has a very retro feel to it. Glowing symbols include a snake, lion, eagle, panther and the usual card denominations making up the rest.

Bet Amounts – Betting begins at bet level 1 and coin level 1 making spins just 20p each. But these two things can be adjusted and if you chose to have the maximum, then you can be looking at £100 per spin. So, although at the higher end it can be an expensive run, there is still a lot of scope in-between making the game affordable for most.

Wild Symbol – The retro designed wild symbol shows a pink ‘wild’ slashed across a golden ring and this will substitute for all other symbols except the scatter. It is also your highest paying symbol within Neon Staxx and will offer up a very healthy x200 coin win, for landing 5 on a winning pay line.

Scatter Symbol – Pink seems to be the go to colour for the special symbols in Neon Staxx, because a pink ‘scatter’ embossed across a green ring is your scatter symbol. Landing three or more of these will trigger the bonus spins feature for you. 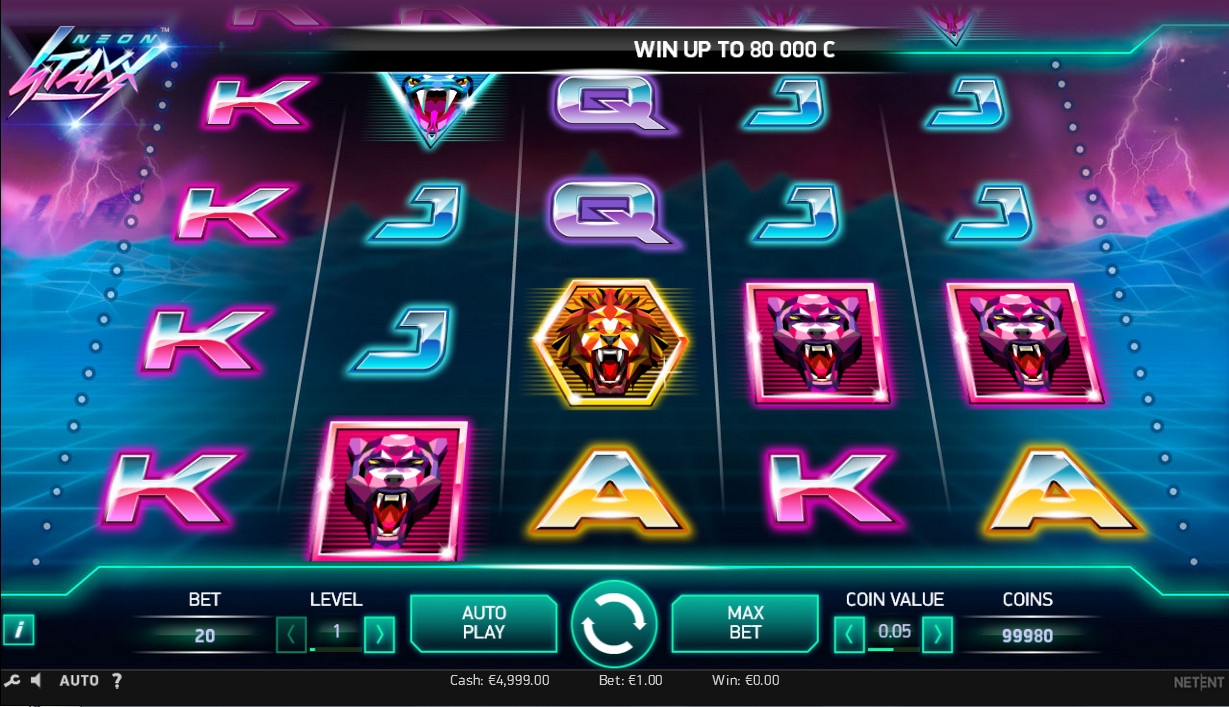 Super Staxx Feature – Neon Staxx has a very cool feature called the Super Staxx, which is very simple in design and super effective when it lands. Triggering randomly, you will see that a stack of matching symbols will appear anywhere on the reels. The only symbol that will not be included is the scatter, but all others are in play for this feature. Ideally you are going to want the super staxx to begin on reel one, because then as each reel lands there is the chance it will continue the super staxx and create much bigger wins. If you are lucky enough to land super staxx on reel 1 for example reel 2 will spin and potentially add more matching symbols to the stack, then reel 3, reel 4 and finally reel 5. Each reel will add between 1 and 4 matching symbols to the super staxx, until all 5 reels have landed and the win is accumulated. Bear in mind that it can trigger on any reel so may start on reel 3 onwards, but it will still prove a rewarding feature wherever it may land.

Bonus Spins Feature – Upon activating the bonus spins by landing three or more scatter symbols, you will be allocated a set of spins as shown below:

There is no extra multiplier here, however the super staxx feature can be triggered instead. Within the bonus spins super staxx, only the higher value animal and wild symbols are able to be selected.

What’s not to love, well yes, we know there is a lack of features, but on the plus side there is the Super Staxx! We are aware that Neon Staxx does have the fun nature of a great game, but that it could do with an influx of something else. That being said, this is a very popular game and we can see why. As a whole, the graphics are great, the music is electric, and it tugs on the nostalgic heart strings of many a game player. Whether anything else being added would have made the game greater, we will never know. But we do know that for what it is and the RTP on offer, it’s worth having a go.