We all know Egypt has a lot to offer intrepid explorers in search for riches, but what about us online gaming fans. Well NetEnt have combined sand and pyramids in their slot game Coins of Egypt. All you need to do is settle in and click play, but before that we’ll tell you a little more about what you can expect from the masters of slots. 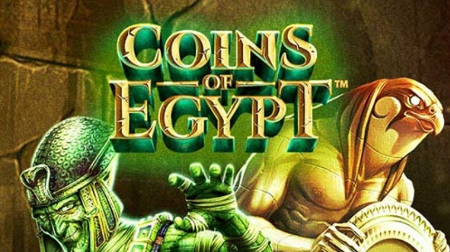 Play Coins of Egypt on any of these top casino sites;

Coins of Egypt is a 5-reel, 20 fixed pay line slot offering a very healthy RTP of 96.97%. The game itself has an almost steampunk feel to the design, with mechanical whirring and clicking sounds as the reels spin. Music in the background is actually really pleasant to listen to, which makes a change. The reels are carved in stone and set against a stormy looking desert background, with two god like sculptures either side of the reels watching over your wins.

NetEnt is well known for adding in little extras and they have done that in Coins of Egypt with the symbols. Higher value symbols are depicted by 5 intricately drawn characters, three of whom appear to be Egyptian gods and then there is a sphinx and a scorpion too. Lower symbols are represented by jewelled scarabs of varying design, which all flicker to life when forming part of a winning combination.

Bet Amounts – Betting on Coins of Egypt begins at just 20p per spin and can be increased in increments to the maximum of £200. As you can see there is a wide scope of stake amounts between the highest and lowest, making the game suitable for all budgets. Amend that bet amount by adjusting either the coin level found to the left of the spin button, or the coin value to the right.

Wild Symbol – A golden scarab sat on a jewel is your wild symbol and it will substitute for all symbols except the scatter, the collect symbol and in the bonus game the seal symbols. It is also your highest paying symbol in Coins of Egypt and will offer a maximum win of x3000 coins, if you land 5 of these in a winning combination. 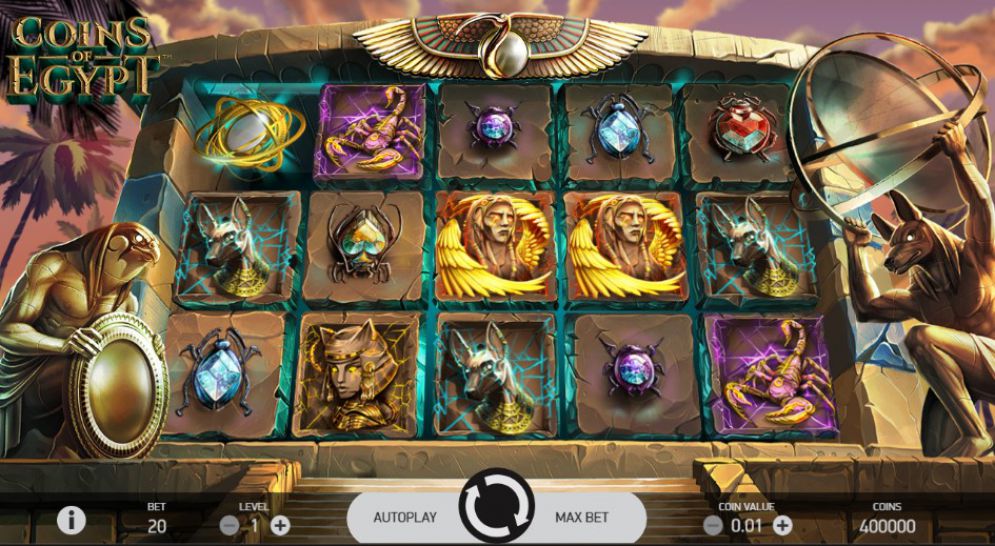 Scatter Symbol – Your scatter symbol on Coins of Egypt is a kind of spinning orb and is the trigger for the bonus spins. You will need to have landed three of these on reels 1, 3 and 5, in order to trigger the bonus spins round.

Pharaoh Collect Feature – Throughout the main game you will notice that a coin will appear at random on reels 1, 3 or 5. It will be a small circular coin in the bottom right hand corner of the main symbol that lands on the reel. Those coin symbols will have an amount on them from x2 to x15 your bet amount. If a pharaoh symbol lands on reel 5 and you have any coin symbols on the reels, those coins will be sucked into the pharaoh and added to your balance as an instant win amount. This is paid on top of any line wins.

Bonus Spins Feature – Land three of the spinning orb scatter symbol on reels 1, 3 and 5 and you will enter the bonus spins round. Here is where it gets really interesting, because you are allocated a seemingly limitless amount of spins. At the beginning of the round you will see a meter set above the reels for the ruby eagle, emerald snake and golden cat, and there is also a matching tomb below the reels too. Now, as the reels spin you will see that a seal will land corresponding to the meters and chests on reel 5. Whatever seal it matches it will fill an orb on the chest below, simply fill up all the orb spaces to win the treasure within the tomb. That treasure is made up of any corresponding coin wins made from the pharaoh coin feature that is active here also. Each pharaoh’s coin when landing will be red, green or gold in colour. The coin win will be immediately added to the corresponding seals meter either the eagle, snake or cat. This is the treasure you win when you fill up the orb spaces and open the tomb below. You will continue spinning the reels until one of the tombs are opened and only then will you be returned to the main game.

Coins of Egypt is a fun and fast paced game with some great features included. NetEnt have done themselves proud with this game and we can see why it is so popular with players of all experience levels. It’s relatively easy to understand and has a bonus that triggers often, which is always a good combination in our eyes. The base game wins help matters along too, as the addition of the pharaohs coin feature boosts those winnings for everyone and not just the high stakes players.