You may not be aware of this, but not only is Battlestar Galactica a cult sci-fi show but it’s also a pretty impressive slots game from Microgaming. The slot is based on the 2004 remake of the hit TV show, so you can expect the usual characters such as Starbuck and Apollo. For the fans you don’t have to worry because they’ve kept true to the programme, so let us at Boku Slots tell you a little more about Battlestar Galactica slots. 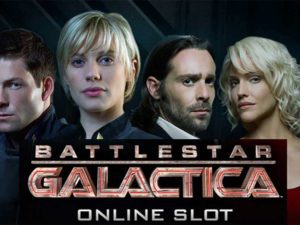 Play Battlestar Galactica on any of these top casino sites;

Battlestar Galactica is a 5-reel slot game, offering 243 ways to win! Now add to that a healthy RTP of 96.62% and we are already looking forward to playing. At first glance the graphics seem a little lacklustre, as they appear to be stills pulled from the show themselves; amidst other Galactica themed icons. But just wait until the wins start coming and those graphics come to life with short videos straight from the show. This is well played by Microgaming and really tugs on the heart strings of avid fans.

Game Modes – There are three modes available to be played in Battlestar Galactica which are Normal, Fight and Jump modes. Each one bringing a little more to the table than the last.

Bet Amounts – Betting begins from just 30p and can be increased up to £15, so be sure to amend the coin size and coin level to suit your requirements.

Wild Symbol – Your wild is the symbol for Battlestar Galactica and it can substitute for any symbol, except the scatter. It can also create extra winning combinations when multiple wilds appear on a pay line. There is also an extra wild symbol which is only available during fight mode, this will transform up to five symbols into wilds.

Scatter Symbols – The scatter symbol is the space ship and it will complete any winning combination when you land 3 or more across the reels. It will also trigger the bonus spins feature, but only during normal and fight modes. 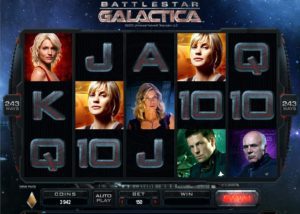 Jump Bonus Feature – Landing the FLT symbol on the centre reel will activate this feature. During which all the playing card symbols are removed from the reels. The FLT symbol will fall into the empty slots, but it will not replace wilds or scatters.

Bonus Spins Feature – You will be awarded 15 spins if you land three or more scatter symbols during normal mode and 5 spins if in fight mode. During normal mode all wins are tripled and during fight you receive an extra wild, which can turn into a split wild and you also receive random additional spins as well.

Ranking System – As you play through Battlestar Galactica you will notice that you rise in rank. This is because you gain points as you play, so as you rise in rank you will receive extra video clips and images. It doesn’t have any bearing on the game play itself, but it is an interesting if somewhat needless addition to the game.

We know what you are thinking, sounds complicated right? It isn’t as tough as it sounds and once you are actually in play it all kind of gels together and clicks. We aren’t sure about the reasoning behind the ranking system, other than to give the die-hard sci-fi fans something else to aim for. It does provide extra animations and programme stills, but other than that its pretty pointless. That being said, we really enjoyed the out takes and smaller animations taken from the show as we went along.