This slot from Lightning Box Games is based loosely on the legend of sleepy hollow and a certain headless horseman. It combines a set of great jackpot prizes in four stages, an interesting feature and some eerie backing music. Enter the dark world of the Lightning Horseman and beware all who enter, for you may never return! 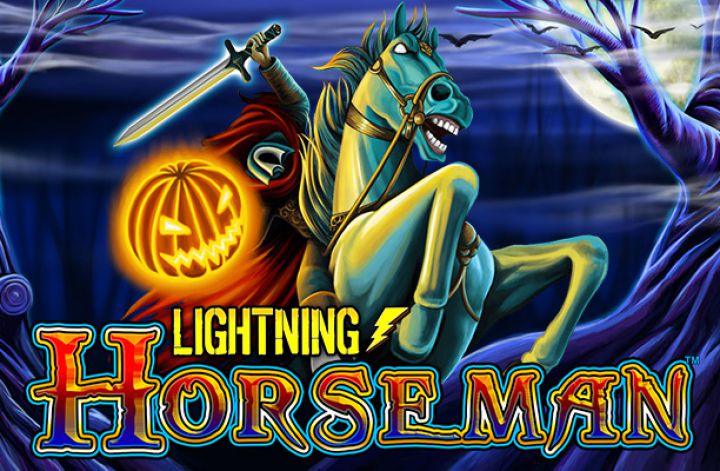 Play Lightning Horseman on any of these top casino sites;

Lightning Horseman is a 5-reel, 40 fixed pay line slot that offers a blood curdling 95.52% RTP. Not as high as we would have liked but there is a great feature and let’s not forget that jackpot too. Set out like an old-style video slot, there is an eerie background and soundtrack to ramp up the atmosphere; that is lost slightly in the reel design. Symbols include a treasure chest, a blonde damsel in distress, a man with a lamp, an ominous looking crow and a bridge which make up your higher value symbols. Lower symbols are made up of the usual card denominations, but they have the odd skull here and there to add to the sense of foreboding.

Bet Amounts – Betting on Lightning Horseman begins at 40p per spin and can be increased up to £50 per spin. Not as expensive as you would think considering the jackpot on offer here. Amend your bet by adjusting the coin value to the bottom left of the screen.

Wild Symbol – Your wild is none other than the headless horseman himself. He will substitute for all other symbols except the scatter. If you are lucky enough to land 5 of these in a winning combination you will bag yourself the highest win of the game.

Scatter Symbol – A lightning bolt is your scatter symbol, and in this game, you need a minimum of 6 lightning bolts or more to trigger the bonus feature. Due to the layout of the reels in Lightning Horseman it’s not as daunting a task to land the 6 minimum scatters needed. But you will need a little patience in order to get there. 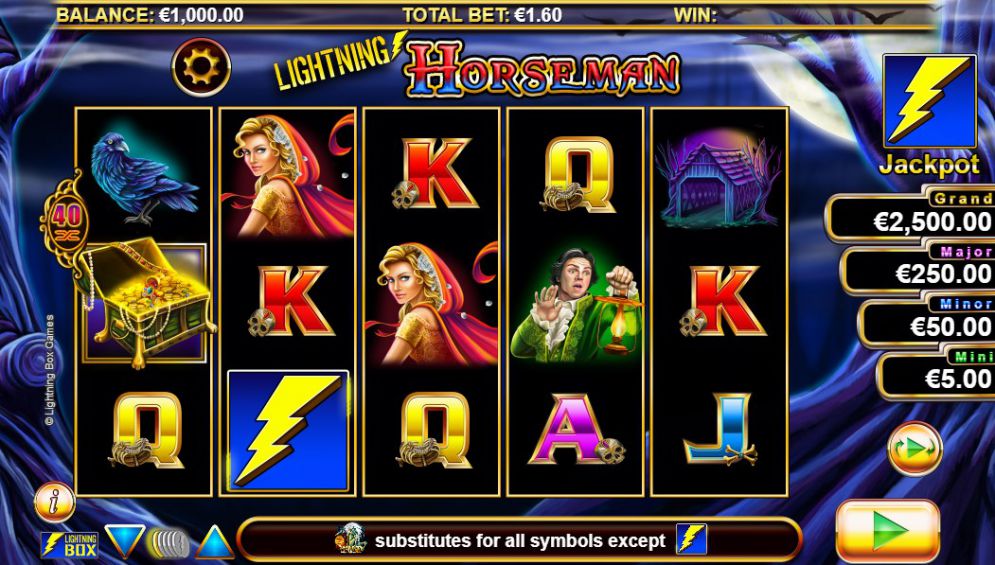 Bonus Spins Feature – Landing 6 or more lightning bolts will trigger the bonus spins for you on Lightning Horseman. Three spins will be allocated which doesn’t sound like a lot. But, every time a new lightning bolt lands on the reels during the spins, the number will reset to 3 and this will continue until no new lightning bolts land. Every bolt that is on the reels will also remain in place becoming a sticky symbol and each new bolt that lands will also become sticky.

Flippin Retrigger Feature – Once your spins have ended all the bolts on the screen will flip over to reveal prize amounts. If all the symbols on the reels have lightning bolts on, they will flip over a second time meaning a bigger win. After each flip of the symbols you are in with the chance of winning one of the jackpot prizes on offer. If you get the second reflip you could win a second jackpot prize, the only thing here is you can only win the grand jackpot once per bonus round.

Lightning Jackpot Feature – At the side of the reels you will see four jackpot amounts, which increase or decrease depending upon the bet amount. The jackpots are ranked in order of size from mini, minor, major and grand prizes. The mini, minor or major jackpot can only be won during the bonus round. It is triggered at random after the spins have ended and have been flipped as mentioned above or during the extra flip feature. They can be awarded more than once in a bonus round due to the reflip option, but the grand jackpot can only be awarded once!

Overall Lightning Horseman is an extremely playable game, even though the graphics leave a little to be desired it doesn’t affect the gameplay. Wins happen regularly within the base game and in the bonus spins. The only downside is it can take some time for that bonus to trigger. But it is definitely worth the wait, especially considering it has that retrigger feature added on at the end. If you can play through, have the balance to sustain and the patience needed to get that feature triggered, it will be a rewarding result.