Iron Dog Studio have looked to Ireland to create the theme for their slot entitled Rainbow Wilds. It is packed full of mischievous leprechauns, amazing features and there is lots of fun to be had spinning those reels. So, what are we waiting for, let’s head on over before all the four-leaf clovers are picked! 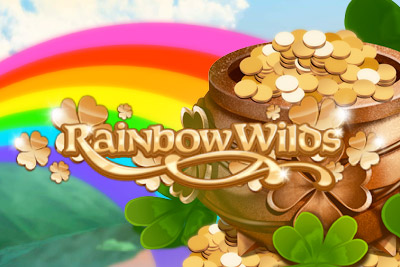 Rainbow Wilds is a 5-reel slot offering players 1024 ways to win and a nice RTP of 96.6% too. Your reels are set on the edge of a vast lake, nestled in a bed of four-leaf clover with mountains off in the distance. You have a few onlookers during play too, three cheeky little leprechauns sit on either side of the reels watching you win away their riches!

Symbols in Rainbow Wilds are a mix of fruits, gold icons and other Irish theme items. High paying symbols are the golden clover, horseshoe, robin, claddagh symbol, harp and pint of Guinness. Lower paying symbols are the fruits in order of highest to lowest they are blueberry, grape, gooseberry, cherry and blackcurrant. There’s some relaxing pan pipe music playing along as the reels spin and every so often you will hear the leprechauns giggling as they watch the game play out.

Bet Amounts – Betting on Rainbow Wilds begins at 50p per spin and can be increased up to the maximum of £75 per spin. To change your bet, you need to click on the coin stack icon below the reels and use the arrows on either side of the bet to change it up or down. Once you are happy with the bet amount you can click anywhere on the screen to return to the game.

Wild Symbols – There are three wild symbols in Rainbow Wilds. You have the wild stars, sticky wilds and expanding wilds in play. Each of these wild symbols will substitute for all other symbols except the other wilds.

Scatter Symbols – Rainbow Wilds does not have a scatter symbol which is unfortunate, however it does not negatively impact the game. Thanks to the three wild symbols in play and the tumble feature, you barely notice the absence of the scatter symbol. 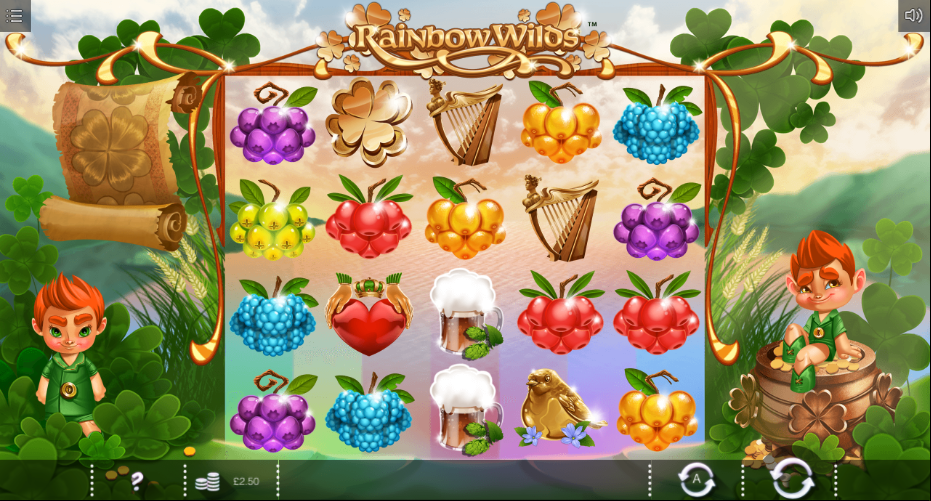 Rainbow Wilds – As mentioned above there are three wild symbols in play, you can read about each one here.

Tumble Feature – With the missing scatter symbol there needed to be a way to trigger the bonus spins. Iron Dog Studio remedied this by adding in the tumble feature. Every time a winning combination is created, those symbols forming it will be removed. As they are removed the symbols above will drop down to fill in the gaps. If those symbols dropping down, then create another win they will be removed and so on until no new wins are created.

The bonus spins cannot be retriggered from within the round. However, if you form a win creating a tumble your multiplier will increase by x1 for that win.

Rainbow Wilds is a fun and engaging slot, bringing fast paced wins in the main game and an exciting bonus spins feature. Iron Dog Studios has designed a beautiful slot with whimsical sounds and stunning graphics. But that’s not really what you are here for is it, let’s be honest, though it helps! Main game wins occur more often than you would think and thanks to the tumble feature you can occasionally bag more than one win per paid spin. The triple wild symbols in play certainly go a long way to helping things along for players. Although you will find the sticky wild and expanding wild can take their time appearing. But when they do land it becomes extremely profitable for players and even more so once inside the bonus spins feature too.