Gary the gorilla has ventured far from his jungle home in this next slot and is headed for the beach. NextGen Gaming has given Gary his very first passport and he is off to enjoy himself in Gorilla go Wilder. Join him on the beach as he plays volleyball, sips on cocktails and generally plays at being the most ungorilla like gorilla you have ever met! 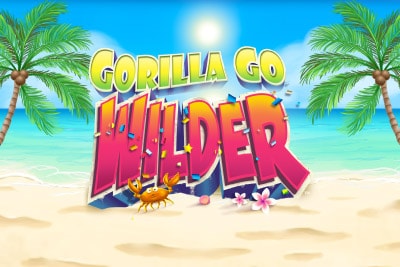 Play Gorilla go Wilder on any of these top casino sites;

Gorilla go Wilder is a 5-reel, 25 fixed pay line slot offering players a variable RTP of 93.05% to 97.04%. Gary the gorilla stands off to the left of the reels which spin transparently above a beach scene, with waves rolling and palm trees blown by the breeze. There are some critters from the jungle along for the ride as well as the usual card symbols.

Higher value symbols on Gorilla go Wilder are the golden coin, purple monkey, toucan and lemur, who have all followed Gary from the jungle for this beach holiday. Lower values are the A, K, Q, J, 10 and 9 which have all had flowers and tiki hut style fonts, to make them a bit brighter. Relax and play as you listen to the tinkling Jamaican tunes playing along in the background.

Bet Amounts – Betting on Gorilla go Wilder begins at 30p per spin and can be increased up to £150 per spin. To adjust your bet, you need to use the coin stacks above and below the spin button. Alternatively hit the three lines at the left of the spin button and click one of the bet options on the screen.

Wild Symbol – Your wild symbols is none other than Gary the Gorilla and he will substitute for all other symbols except the scatter.

Scatter Symbol – An island with a lone palm tree is your scatter symbol on Gorilla go Wilder. Landing three or more of the palm scatter anywhere in view will trigger your bonus feature. Scatter wins are also in play and will award an extra win on top of any line wins already in view.

Shell Respin Feature – Triggering at random after any base game spin you could bag yourself this feature respin. You will be allocated a single respin of all reels, and symbols are now replaced with pink shells. If you land 1 or more shells on the spin you will be awarded another single respin and this will continue until no new shells land. Each shell will award a prize multiplier from between x5 and x250 your bet amount. 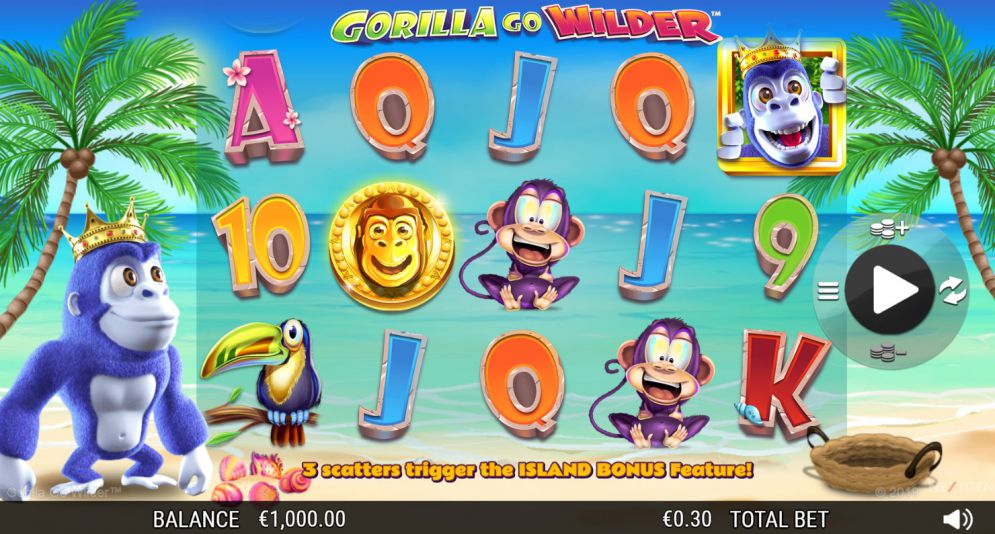 Island Spins Feature – 3 or more palm tree scatter symbols landing anywhere on the reels will trigger the island bonus spins feature on Gorilla go Wilder. Upon first entering the feature you will be given the choice of four islands to unlock. There are 8 in total, but you have to play and unlock the first four islands before you can move to unlock the others. Each time you enter the bonus island spins feature you will be advised as to whether you can unlock another, or you will be asked to choose from any you have already unlocked. Once you have unlocked all 8 islands you can play whichever one you wish. All island choices offer an allocation of 10 bonus spins with varying modifiers and extras on each option. Each island bonus spin round can be retriggered once from within that initial round.

Gary’s Gift Feature – During the base game you may see that Gary the Gorilla decides he wants to go island hopping. This means he will snap his fingers and transport you to any one of the above islands to play a bonus spins island at random. He can also retrigger the bonus island for you any number of times depending on how he is feeling. So, this means you may be able to get a chance at playing the islands before you have unlocked them through the bonus feature.

You know that old saying that you need a holiday to get over your holiday? Well with Gorilla go Wilder that is certainly the case. Gary the gorilla may well be in paradise, but he is making you all work for it with 8 bonus unlockable islands in the feature. However, to smooth things over you get a taste of what’s to come with the Gary’s Gift feature. Which is a great idea on the game developers’ part because unlocking each island can take time. The shell respins feature triggers easily enough and can be very profitable. This is also great because the other two features can take their time in triggering. Main game wins come fast enough too which also staves off the boredom whilst waiting about to go island hopping with Gary. That being said Gorilla go Wilder is a fun, engaging and extremely playable slot despite the waiting about for the main feature. Overall if you are wanting a quick game then maybe this isn’t for you, but if you have time to kill and enjoy Caribbean music then what are you waiting for?