When it comes to slot games, the magical wizarding world holds a plethora of ideas for game designers. This next slot is no different, White Wizard was developed by Aristocrat Leisure and although not packed full of mystical items it certainly has a magical theme to it. Join us as we try to win the wizards riches away from him without him noticing and turning us into frogs! 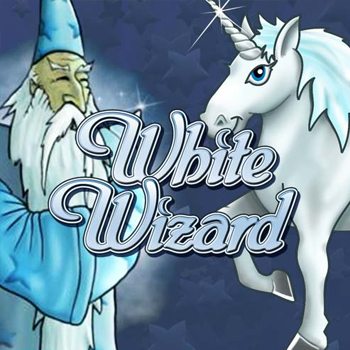 Play White Wizard on any of these top casino sites;

White Wizard is a 5-reel, 25 pay line slot offering the wizards apprentices a less than magical 95.94% RTP. Upon first entering the game you will not be too overwhelmed with the graphics, as they seem very basic. Stars float around in the background and the reels are encased in some kind of wooden frame. The symbols are where things take a bit of a turn with things like dragons, unicorns and of course the White Wizard himself. In keeping with the less is more philosophy is the lack of backing music, the only thing you can hear when the reels are in play is some very basic retro slot sounds. This includes a wooden tapping as the reels settle into place and a warbling tune as a win is landed!

Bet Amounts – Betting begins at 1p per line in play and can be increased up to 50p per line in play. This means that spins can cost anywhere from 1p per spin up to just £12.50 per spin. With this in mind we can add White Wizard to our list of the more affordable range of games online.

Wild Symbol – In a game called the White Wizard it seems only right that the wild symbol is depicted by the wizard himself. He will only land on reels 1, 3 and 5 and any win made using the wizard will be awarded a x3 multiplier. Your wizard wild will substitute for all other symbols except the scatter.

Scatter Symbol – A rather unscary looking blue dragon is your scatter symbol in White Wizard. He will land anywhere on the reels and landing three or more in view will trigger the feature for you. Scatter wins are also in play here too, meaning land just 2 or more of the dragon scatter symbols on the reels to bag yourself an extra win. These scatter wins are paid out on top of any line wins present on the reels. 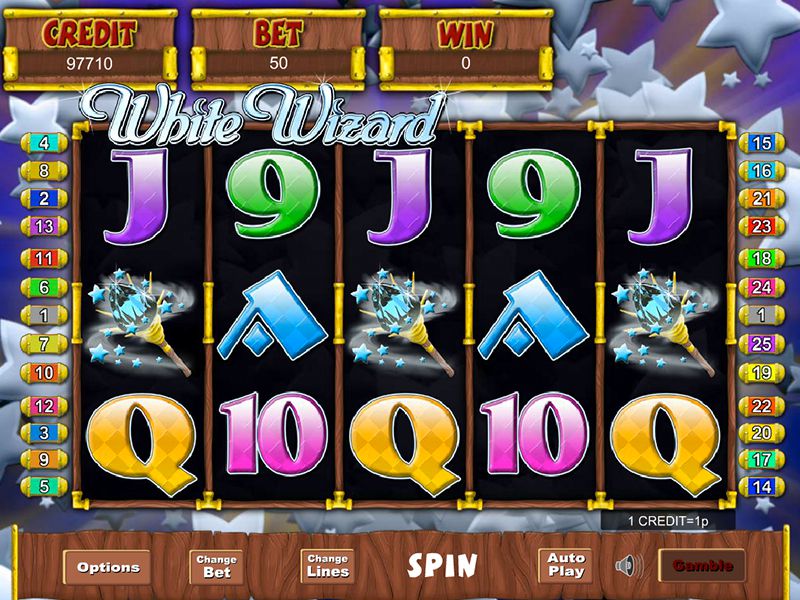 Other Symbols – Higher value symbols are depicted by a bubbling cauldron, a spell book, a white unicorn and the wizard’s wand. Lower values are depicted by card symbols running from A, K, Q, J, 10 and 9 with no extra design work going into them. They are a bit plain which is kind of in sync with the rest of the game.

Bonus Spins Feature – Upon landing the required three or more dragon scatter symbols on the reels you will enter the bonus spins. You will be allocated a set number of spins depending on the number of scatters you landed on the reels upon triggering the round.

During the bonus spins round the wizard wild symbol turns into an expanding wild and will fill the whole reel upon landing. The bonus spins round can be retriggered up to a maximum of 15 times within the round, giving players a potential x225 to x375 spins that can be claimed.

White Wizard doesn’t have a lot to offer players either in design or in gameplay. In short it is a simple and easy game to switch in and out of. It has an ease of use that comes with such a low action game that makes it quite playable in its own way. Main game wins are slow at first but then tend to pick up after extended game play, if you can stick it out long enough. But, thankfully that bonus spins round lands a bit easier and is the games saving grace. The expanding wild symbol in play during the bonus helps create more win potentials and of course the round can be retriggered which is always a bonus. Overall, if you are looking for a game that has more depth, plot lines and extra features then White Wizard won’t be for you. However, if easy wins, simple game play and a great bonus spins round does it for you, then you will have a great time!

May 24, 2019 Boku Slots Comments Off on Agent Jane Blonde Returns