Playtech have designed an amazing series of slots called the Age of Gods, which has grown rapidly in popularity amongst online gamers. The first of these games is King of Olympus, which leads you through the world of Zeus the ruler of Olympian gods. Join us, Boku Slots as we delve further into the world of Age of Gods: King of Olympus. 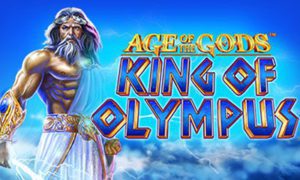 To play Age of Gods: King of Olympus head to any of these casino sites;

Age of Gods: King of Olympus is a 5-reel, 25 pay line slot game, which appears to be the norm for the Age of Gods series. It has a variable RTP of between 94.99% to 95.98% so not as high as some of the others, but it does have the progressive jackpot that has become a mainstay of the series.

Bet Amounts – Betting amounts begin at 1p per pay line, increasing only to 40p per pay line. Meaning games can cost from just 1p to £10, making this one of the lower priced games in the Age of Gods series. The only changes that can be made are to the pay lines and to the bet amount, there are no coin level changes on this game.

Wild Symbol – Your wild symbol is none other than Zeus himself. He will substitute for all other symbols except for the scatter. He is also the highest paying symbol offering 3000 coins, if you land 5 across an active pay line and he is a sticky wild during the bonus spins game.

Scatter Symbol – The scatter symbol is Zeus’s temple, so land 3 or more of this symbol on any of the reels and you will trigger the bonus spin feature.

Other Symbols – There are lots of mythological symbols in this game including Pegasus, Zeus’s Eagle, a ship, the golden harp, an urn, and the letters A, K, Q and J. These are all in pay out order so after the Zeus wild, Pegasus is your next highest paying and the letter J is the lowest. 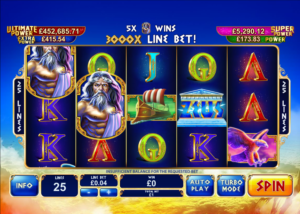 Bonus Spins Feature –  Upon landing 3 or more scatter symbols the bonus spin game will trigger. You will receive 10 extra spins, but as well as that you will also receive a sticky wild. Zeus will appear in the centre of the reels and will remain there for the duration of the spins. Every 2 spins Zeus will increase the multiplier on the game and he also substitutes for all symbols except the scatter, to complete any possible winning combinations. The multiplier starts at x2 and will increase every 2 spins until it hits x6, meaning wins increase as the spins unfold. The bonus spins cannot be retriggered by landing scatter symbols during play.

Progressive Jackpot Feature – As is with the Age of Gods series, there is a progressive jackpot game that can be triggered at any given time. Again, as is the same with the others, the higher your stake amounts the more likely it is that the progressive jackpot will launch. You will be taken to a screen that is filled with coins and there will be four jackpots at the side of the screen. These have the names Ultimate power, Super power, Extra power and Power. You then click on the coins revealing symbols and to win any of the jackpots, you need to match three symbols. Whichever jackpot has 3 symbols matched first is the one you win. It should be noted that you are guaranteed a win when you enter this feature which is amazing.

There is a lot to like about Age of Gods: King of Olympus, including that progressive jackpot. We enjoyed the turbo spin option as well, as it made the game run slightly quicker than usual. The graphics are pleasing as is the soundtrack, although it can get a bit monotonous if playing for a prolonged period.

May 30, 2018 Boku Slots Comments Off on Untamed Giant Panda