Boku Slots welcomes you to Age of the Gods Slots, where you can journey with Athena, Zeus, Hercules and Poseidon on an adventure through the sky. For those of you who have come across other Age of Gods games from Playtech, you’ll be intrigued as to what you can expect from this one. So, let us give you all the details before you check it out. 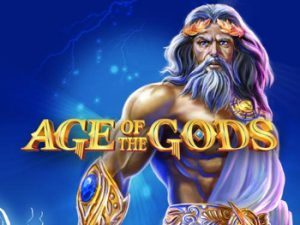 Play Age of The Gods on any of these top casino sites;

Age of the Gods is a 5-reel, 20 fixed pay line slot game, with a regular progressive jackpot that appears in all of the games throughout the series. It has a slightly higher RTP of 94.03% to 95.02%, whereas most of the other games in the series are a little lower. But with its extra bonus features and that awesome progressive jackpot we can forgive the RTP.

Bet Amounts – Betting begins as low as 1p per pay line and can be increased right up to £2 per pay line. Because it’s fixed this means spins vary from 20p to £40. We love the simplicity of fixed pay line slots because it gives a range of stake amounts suited to all pockets, without the need of chopping and changing lines.

Wild Symbol – The wild symbol in Age of Gods is the word WILD in front of a golden wreath. This wild substitutes for all symbols except the scatter and is the highest paying symbol too. Land five of these on an active pay line and you will win 10,000 coins.

Scatter Symbol – Your scatter symbol is the game title Age of Gods, with a swirling vortex behind it. Land 3 or more scatters on any of the reels and you will trigger the bonus game.

Pantheon of Power Feature – This is a special feature, to activate it you need to land all five of the god and goddess symbols on an active pay line. They can be in any order, but it needs to be active and if you manage this you will win a multiplier of 200x your bet amount.

Age of Gods Bonus Spins Feature – The Age of Gods bonus spins feature is brilliant in design. When you land three or more scatter symbols anywhere on the reels, it triggers this bonus. You will then be taken to a new screen that has 20 coins in view, simply pick coins until you find three that match. The symbols are Athena, Hercules, Zeus, Poseidon and Hades. If you pick Hades, the game is over instantly and you are returned to the main game.  However, if you get three symbols matching any of the other gods, then you enter the bonus round with prizes including;

Progressive Jackpot Feature – Again there is the amazing progressive jackpot available with Age of Gods, as is with all games in the series. You will be given a screen of coins to choose from. Pick coins until you have matched three symbols. The symbols relate to one of the guaranteed jackpots available named Ultimate power, Super power, Extra power and Power. Whatever happens once you trigger this game you are guaranteed a win. The jackpot can be triggered randomly but the higher your stake amount the more likely this will happen.

Well, what a ride this has been, there have been gods, goddesses and the king of the underworld himself trying to stop your progression. Playtech have outdone themselves with this instalment of the Age of Gods slot games. Although the RTP is still a little on the lower side compared to a lot of other popular slots, it can be forgiven as the bonus features and extras seem to be triggered quite easily. With bright awesome graphics and an ethereal soundtrack, we can safely say this episode of Age of Gods is one of our favourites.