Now is the time of the age of gods and Boku Slots is more than aware of the power this slot game has over players worldwide. Playtech has released many versions of the Age of Gods games and God of Storms is definitely holding its own. 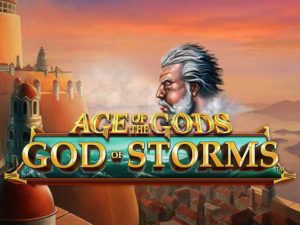 Play Age of Gods: God of Storms on any of these top casino sites;

Age of Gods: God of Storms is a 5-reel, 25 pay line slot game with a fabulous RTP of 96.14%. Not only that it has a progressive jackpot game and a bonus feature to keep you busy.

Bet Amounts– Betting begins at just 1p per pay line meaning spins can be as low as 1p to 25p, depending upon your pay line amount choices. However, you can increase your bet amount up to £10 per pay line, meaning your betting amount can go as high as £250 per spin. Ensure you have amended the pay line and bet amount to suit your needs before hitting spin.

Wild Symbol – Your wild symbol is both the word ‘Wild’ which substitutes for all other symbols, or a ship which will trigger the feature. A partial ship will work as a normal wild, completing any winning combination across active pay lines. However, get a full ship on reels 2, 3 or 4 and this will trigger the Wild Wind Re-spin feature. 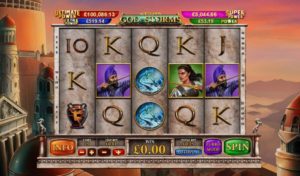 Other Symbols – The other symbols you will find throughout this game include a soldier, swords woman and an archer which are your highest paying symbols. The lower paying symbols include the kraken, urn, A, K, Q, J and the number 10. There are no scatter symbols in this game.

Wild Winds Re-spin Feature – Once the ship wild lands and fills the reel, it triggers the re-spin feature. The god of storms will appear at the side of the screen and on each re-spin will blow the ship one reel across until it falls off the reels. The reels will re-spin every time the ship is blown across a reel, so you may end up with 4, 3, 2 or 1 re-spin depending on where your ship wild appears. The multiplier also increases with every re-spin beginning at x1 and increasing to x5.

Progressive Jackpot – At any time your game can be turned into the progressive jackpot. The higher your stake amount the more likely this will occur. When the progressive jackpot game begins you will be offered a screen filled with golden coins. You simply need to choose coins until you find three matching symbols. The symbols relate to the four ‘super powers’ available. Which are Ultimate power, Super power, Extra power and Power. Whichever power symbols are filled up first is the jackpot you will win, no matter what you are guaranteed a win when you enter the progressive jackpot feature.

Although it isn’t up to the normal standards within the Age of Gods slot series, we still enjoyed it. The progressive jackpot and wild winds re-spin make the game quite interesting to play. We did feel that the graphics were quite basic on Age of Gods: God of Storms, but again this doesn’t detract from the enjoyment of the game itself.

Jewels of the Orient

April 23, 2019 Boku Slots Comments Off on Jewels of the Orient