Spells, potions and wizardry galore is all to be found in our next magical slot game. Developed by non-other than NetEnt, simply enter the tower where you will be greeted by the wizard who lives there. Be careful though as he begins to chant, because you may become Spellcast and find yourself unable to leave! 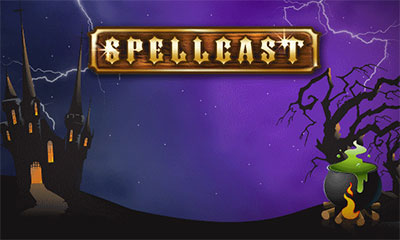 Play Spellcast on any of these top casino sites;

Spellcast is a 5-reel, 20 fixed pay line slot offering a magical 96% RTP for players. A ghoulish laugh occurs every so often on the wins and there are other spooky sounds in the background. The reels thud as they land, and it becomes almost mesmerising, so we had to switch it off.

Your reels are set against a darkened skies background with a castle just on the horizon and creepy characters are casting spells on the reels from either side. Symbols include a castle, wizard, potion bottle, spell book and a wand for your higher pay outs. Whereas for the lower symbols Spellcast has opted for the card denominations, A, K, Q, J, 10 and 9, but made them gilt edged and golden looking to stand out.

Bet Amounts – Betting on Spellcast begins at 40p per spin and can be amended up to the highest stake of £40 per spin. So, it’s not overly costly and means there is plenty of movement between the two stake amounts to suit all pockets. Amend the coin level and coin value on either side of the spin button, until you are happy with your stake before you start spinning. 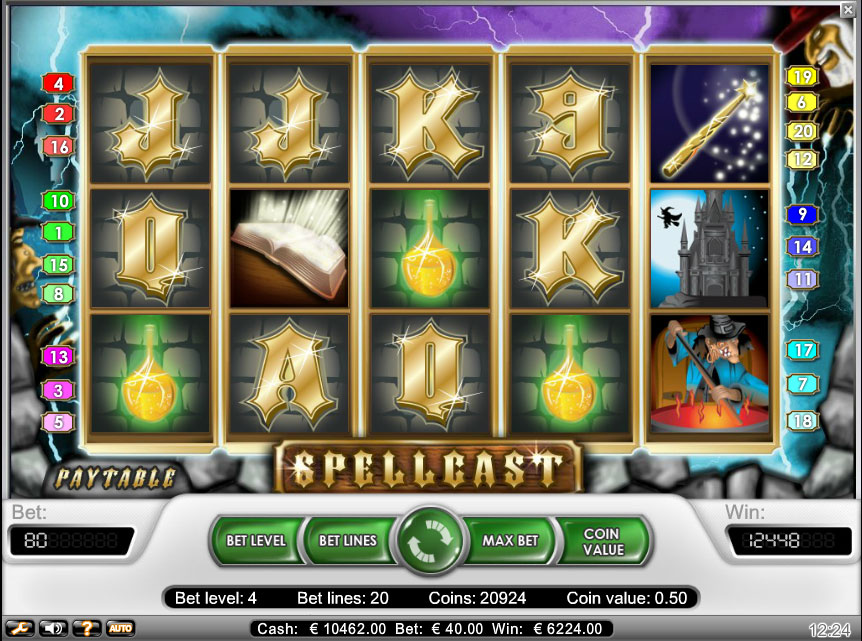 Wild Symbol – An old wizard is your wild symbol in Spellcast, he will substitute for all other symbols except the scatter. If you land a win that the wild has helped to form, that win will be doubled. He is also your highest paying symbol, offering a x10,000-coin win if you land 5 in a winning combination.

Scatter Symbol – Your scatter symbol is a crystal ball, land three or more of these anywhere on the reels to trigger the feature. Scatter wins are also activated here too, meaning if you land 2 or more symbols you will win a prize amount on top of your line win.

Bonus Spins Feature – Having landed three or more of the crystal ball scatter symbol you will enter the bonus spins round. Whether you land 3, 4 or 5 scatters the allocated spins remains the same for each and you will receive 15 spins to play. All wins made within the bonus spins round are subject to a x3 multiplier.

Spellcast may seem overly simple to some but that’s the beauty of the game. One fantastic bonus round that triggers often, great animations such as the wizard’s laughter and red glowing eyes. Not to mention the all important win factor, whether in the main or the base game, wins happen fast. Usually on the lower end of the pay scale but not always and those big wins happen more often than you would think. We did have to turn off the sounds in the end as those thuds when the reels landed where sending us to sleep, but other than that we really enjoyed the game. We can see why NetEnt kept things simple, too many features would have distracted us from the playability of the game. It’s definitely one to keep you occupied in short bursts as there isn’t that much to take into consideration when playing.