Let’s be honest we all love a good dragon feature, whether it’s a movie, novel or a game we are suckers for the fantastical. Well, here at Boku Slots we have found one such game to ‘reel’ you in and this one has been developed by Big Time Gaming. Enter the realm of the Dragon Born and test your wits against the might of the dragon. 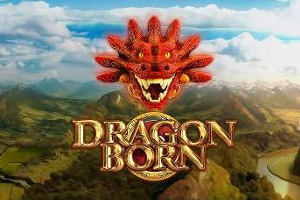 Play Dragon Born on any of these top casino sites;

Dragon Born is a 6-reel slot and offers players a whopping 117649 ways to win, with each reel having up to 7 symbols on. Now despite the amount of ways to win, it still offers a low RTP of 95%. But let’s see how that affects the wins coming out of the reels shall we? As for the game itself, it is set against a mountain range backdrop and has what appears to be a medieval theme to the music playing as the reels spin.

Bet Amounts – Betting begins at just 20p per spin and can be increased to a maximum of £10 per spin and no further. Big Time Gaming obviously wanted to make this game reachable for all and this probably explains the lower RTP.

Wild Symbol – The court jester is your wild symbol and she will substitute for all other symbols in Dragon Born, except the diamond scatter. She has no other value attached to her, however she does feature largely throughout the game as you will read below.

Scatter Symbol – We were hoping that the dragon would feature as one of the extra symbols. But not here, as the large diamond is your scatter symbol. Landing between 3 to 6 of these anywhere on the reels, will trigger the bonus spins round. 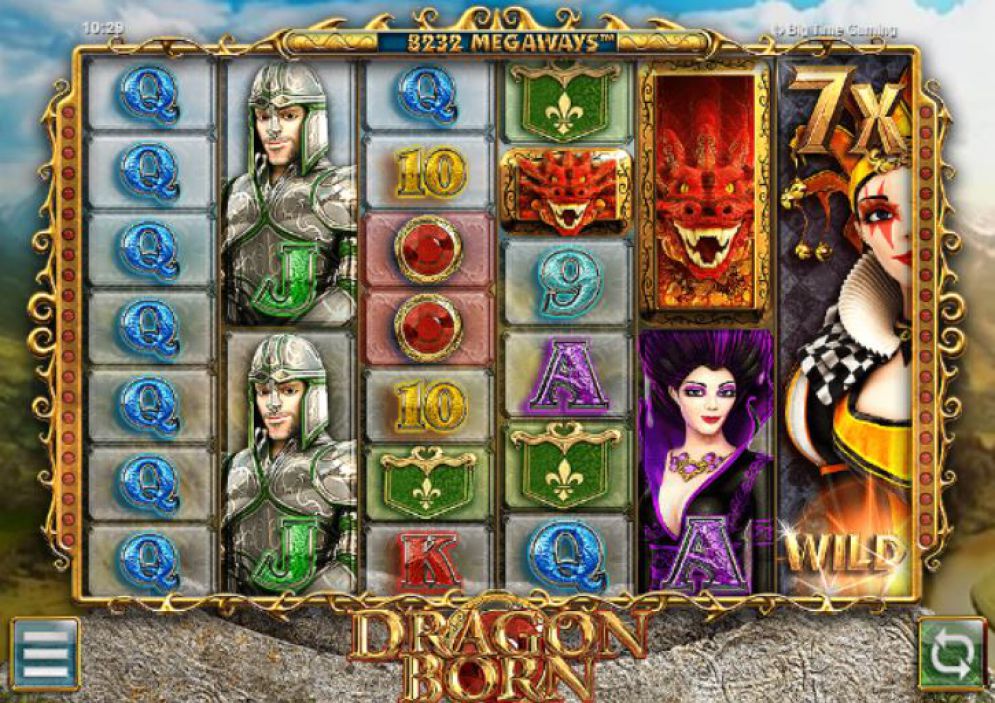 Megaway’s Feature – 117649 ways to win with Dragon Born is pretty impressive, so if you’re wondering how that works read on. Big Time Gaming have 6 reels spinning with up to 7 symbols on each, or a combination of stacked and single symbols. If you land 7 single symbols on each of the 6 reels, this gives you the full 117649 ways to win. This is because the symbols need only be matching on adjacent reels instead of in lines.  You will see how many ways there are potentially at the top of the reels as each spin occurs, depending on the number of symbols on each reel.

Bonus Spins Feature – After landing either 3, 4, 5 or 6 diamond scatter symbols, you will be allocated a number of spins and begin your bonus round. In the bonus spins all 7 symbols are activated on each reel for each spin, meaning each round has the full 117649 ways to win activated. Spins are allocated as shown below:

There is no extra multiplier here, but each diamond scatter that lands on the reels will award an extra spin and the whole round can be retriggered if you land 3 or more again. On top of that your single and stacked wilds will substitute for all symbols, just as they do in the base game.

Whilst Dragon Born isn’t overflowing with the bonuses and extras we possibly hoped for due to the theme, we still enjoyed it. Wins were slow at first but after playing a few rounds they started coming quicker, albeit in smaller amounts. What we were eager to try was the bonus spins and once it landed again we were not disappointed. Playing with the full 7 symbols per reel was advantageous and proved to be very profitable, as we landed extra scatters extending the round. For us the lower RTP and lack of extra’s is about the only negative we could find, as other than that the game on a whole won us over.