This next slot features a character we all know not to look at directly. That’s right Medusa is back in NextGen Gaming’s Medusa Megaways. With some exciting features, a megaways win and the reactions feature there is a lot going on in ancient Rome. Are you brave enough to face Medusa and steal away her riches? 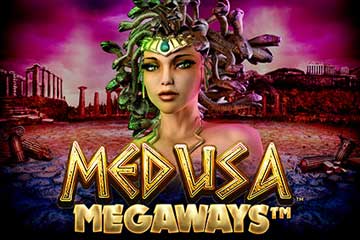 Play Medusa Megaways on any of these top casino sites;

Medusa Megaways is a 6-reel slot offering 117,649 ways to win and a variable RTP of 96.29% to 97.63%. Set inside what looks like a damaged roman temple, the reels spin packed full of roman themed symbols and the ever-looming threat of Medusa’s arrival. Higher paying symbols are depicted by Pegasus, a stone soldier, a pendant, a ring and Hermes winged shoes. Lower value symbols are depicted by the A, K, Q, J and 10 designed to look as if carved in stone. The odd thing about the game is the music playing along as the reels spin, because it sounds remarkably Egyptian instead of Roman. However, those hissing and slithering sounds that are added on top of the track make it even more off putting, so we had to switch it off after a while.

Bet Amounts – Betting on Medusa Megaways begins at 25p per spin and can be increased up to £25 per spin at its limit. To adjust your bet, use the coin stacks above and below the spin button to increase or decrease incrementally. Alternatively, you can click the three lines at the left of the spin button, to open the full range of bet options to choose from instead. Once you have selected your bet just hit the spin button to return back to the reels, or to begin spinning again.

Wild Symbol – Medusa herself is the wild symbol in Medusa Megaways and she can land anywhere on the reels. She will substitute for all other symbols except the scatter and the bonus.

Bonus Symbol – The bonus symbol is a soldier and he is only active during the bonus feature. He will only appear on the extra reel at the top of the main reels. When he appears, he triggers the snake strike feature as explained below.

Megaways Wins / Reactions Features – Megaways win and Reactions work in perfect synchronicity to provide players bigger win opportunities. With Megaways the symbols will land either 1, 2 or 3 positions high on the reels and these bigger symbols help create bigger win combinations when they land. Reactions means that each time a win is formed, those symbols are removed from the reels and new ones drop into place. If new matches are created the process begins again and continues until no new winning combinations are formed.

Medusa’s Gaze Feature – Triggered by landing a wild symbol on the extra reel above the main set, the Medusa’s Gaze is actually a nifty feature. When triggered all the symbols below it in the main reel set will turn wild and hopefully complete any potential wins waiting on the reels. 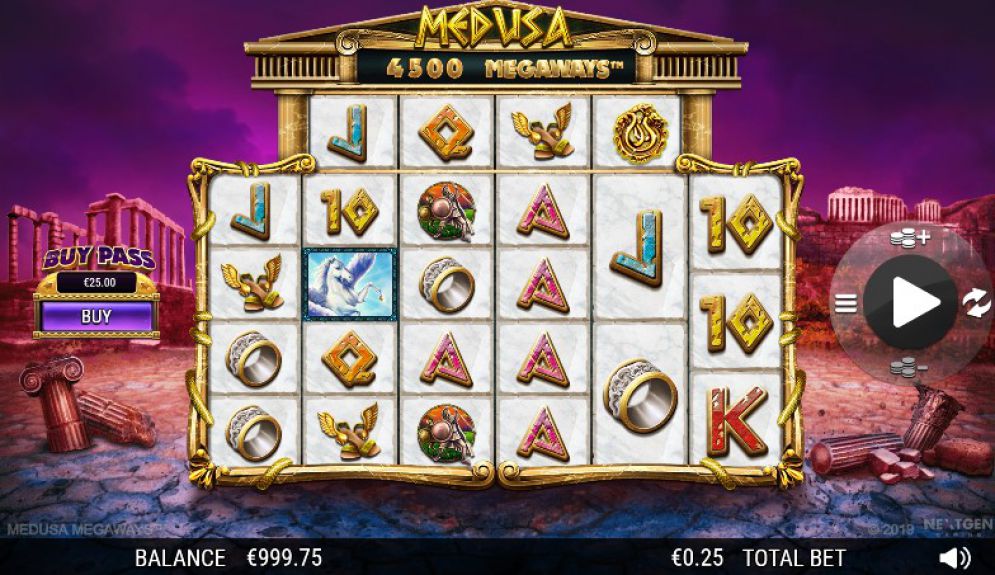 Bonus Spins Feature – Land three or more of the Medusa Megaways logo symbol anywhere on the reels to enter the bonus spins feature. Alternatively, you can buy your way into the feature instead, but it will cost you x100 your bet amount. Meaning if you are betting at £25 it will cost you £2,500 to enter the feature! Our advice is to wait it out and let it trigger naturally.

You will be allocated with 10 bonus spins at the beginning of the round to play through. But every time a scatter symbol lands you will be awarded 5 extra spins for each one. You will begin the game with a x2 multiplier which will increase by x1 with every successful reaction made during each spin. There is no limit to the value the multiplier can reach so the win potential here is high. The multiplier doesn’t reset after each bonus spin either, meaning the multiplier will continue climbing throughout the duration of the whole round!

Snake Bite Feature – This is only active during the bonus spins and is triggered by landing the soldier bonus symbol in the extra reel above the main set. When he lands snakes will attack from either side and the soldier will transform into a wild or a scatter symbol. If he turns into a wild then the Medusa’s Gaze feature will trigger, if he turns into a scatter x5 extra spins are awarded. This is just another way of expanding the win potential for players during the bonus round.

Temptation Feature – After you have played through all of your bonus spins you will be offered a taste of temptation! You will be given two options, collect your winnings or play the round all over again! Choose collect and your winnings will be awarded, and you will be returned to the game. Choose to play again and all the winnings from the bonus round are forfeited and you begin the round again with 10 spins and starting at the x2 multiplier. You do however keep the money won from the paid spin that triggered the bonus round initially. Be warned though you are only offered the temptation feature once per bonus round.

Well, did you manage to get all that? Because there is a lot happening in Medusa Megaways, but we hope we have in some way clarified the major points for you. Once you begin playing the game, everything will fall into place and become much clearer to follow. Main game wins happen fairly regularly which is great of course, but the big money is in the bonus spins and that can take some time to trigger. You do of course have the buy in option on Medusa Megaways if you don’t want to wait, but our advice is to leave that be and let it trigger through normal gameplay. Mainly because although the win potential is high and you do have that second chance to replay it, you won’t always win back what you have paid to enter the feature. Of course, we can’t stop you and the option is there should you decide to do so, but be warned it can work out more costly to do it that way.