The Viking Gods offer so much inspiration for game developers worldwide. One such developing team by the name of Red Tiger Gaming have taken the idea of lightning from Thor’s hammer and created a slot based around it. With two random features and two bonus spins rounds, Thor’s Lightning has a lot to offer players, you just need to read on to find out more. 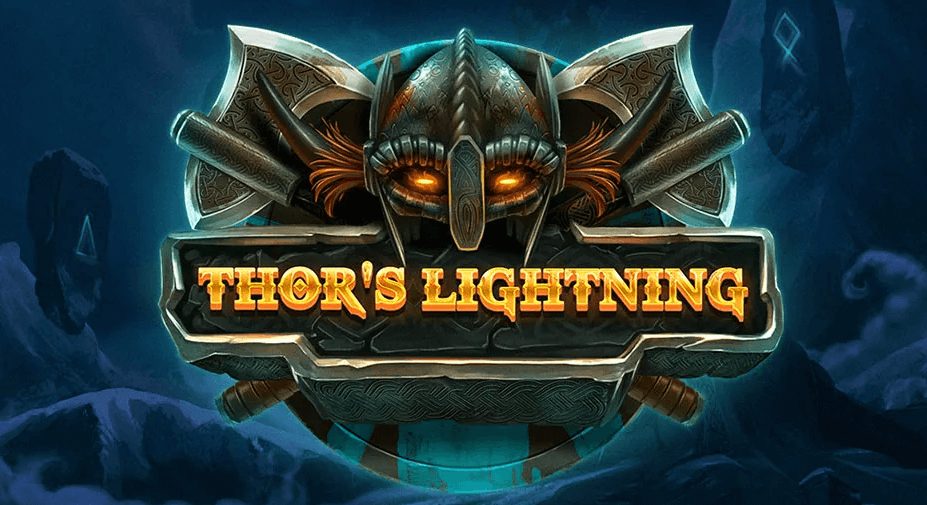 Play Thor’s Lightning on any of these top casino sites;

Thor’s Lightning is a 5-reel slot offering a cluster pays way of winning and an RTP of 96.08%. Your reels are set out slightly differently too, because they are on a 7×7 grid. It comes with a centre block within the reels that forms the bonus spins trigger. There is lots of snow and mountains surrounding the reels and the symbols are all Nordic runes and icons, relating to the gods themselves. Higher paying symbols are Thor’s hammer, the tree of life, a green wolf and a blue eagles face. Lower value symbols are depicted by various runes in yellow, red, green and blue. All the symbols look as if they are carved out of stone in keeping with the theme. In the background there is a tune playing along that’s pretty non-descript considering the theme of the slot. Thankfully though it isn’t annoying or over the top, so has no real bearing on how the game is enjoyed.

Bet Amounts – Betting begins at 20p per spin and can be increased up to £40 per spin. Not overly expensive in the grand scheme of things and making Thor’s Lightning one of the more affordable slots. To change the bet, click on the bet amount at the lower left of the reels. It will expand an overlay window with various bet amounts on it. Just choose the bet you wish to play with then hit spin to continue.

Cluster Pays / Avalanche Falls – Cluster pays is very simple, because to land a win you need x5 or more matching symbols in a group or cluster; hence the name. Avalanche falls are always a welcome addition to slot games. Every time there is a winning combination those symbols forming it will be removed from the reels and new ones will drop into their positions. Any new matches will be formed, removed and replaced in this manner until no new matches are created.

Wild Symbol – Your wild symbol is Thor’s golden winged helmet and it can land anywhere on the reels. It will replace all other symbols in the game to complete winning combinations.

Scatter Symbol – There is unfortunately no scatter symbol in Thor’s Lightning. That doesn’t actually impact the flow of the game as much as you would think. Red Tiger Gaming have come up with an innovative way to trigger the bonus spins instead of using a scatter. Read on below to find out more about this feature.

Thor’s Bonus Features – At any point in the game one of the two Thor’s Bonuses may well trigger. When they do trigger you will be awarded one of the following mini features as explained below: 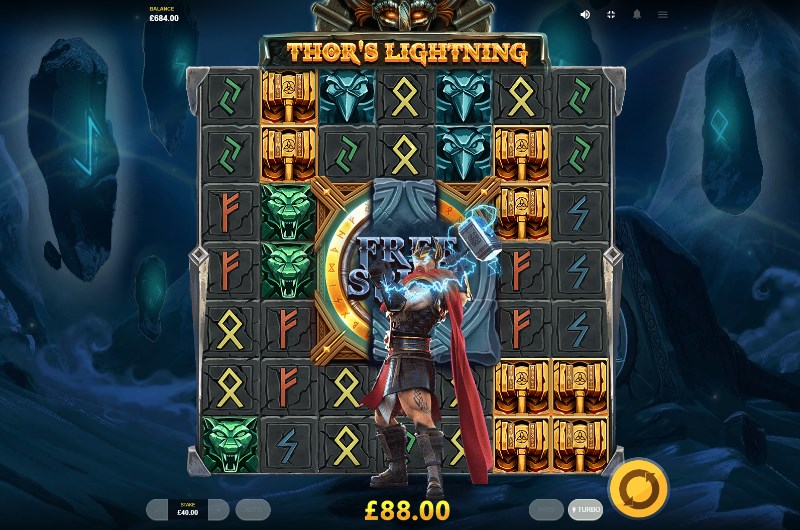 Bonus Spins Feature – As there is no scatter symbol you are probably intrigued as to how the bonus spins are triggered. Well in the case of Thor’s Lightning you need to land winning clusters of x5 or more, that are adjacent to the huge Bonus Spins block in the centre of the reels. Whenever you do this the blocks closest to the matching symbols will fall away, revealing a bronze tile underneath. Once all the stone blocks have been removed the bonus spins will be triggered. But the stone block resets after every spin meaning it can take some time to trigger this particular feature. Once triggered you will be awarded one of two bonus spins options:

Thor’s Lightning is a great game, which is easy and enjoyable to play. Main game wins come thick and fast thanks to the cluster pays and avalanche style too. Your random features happen fairly regular too which is a blessing, as it can take quite some time for the bonus spins to trigger. But overall there is plenty of win potential without triggering the bonus spins. If patience isn’t your thing then you may not want to spend too much time on Thor’s Lightning. But if you don’t mind waiting around then when that bonus spins lands you will be well rewarded.

February 8, 2019 Boku Slots Comments Off on Caravan to Cairo