Egyptian slot games are not in short supply, so if that’s your preference it can be quite daunting to decide which one. This next slot from NextGen Gaming is called A While On The Nile and it takes a different course to the usual Egyptian theme. Cartoon in style and based right on the banks of the Nile, the game is packed full of features to ensure you are thoroughly entertained. 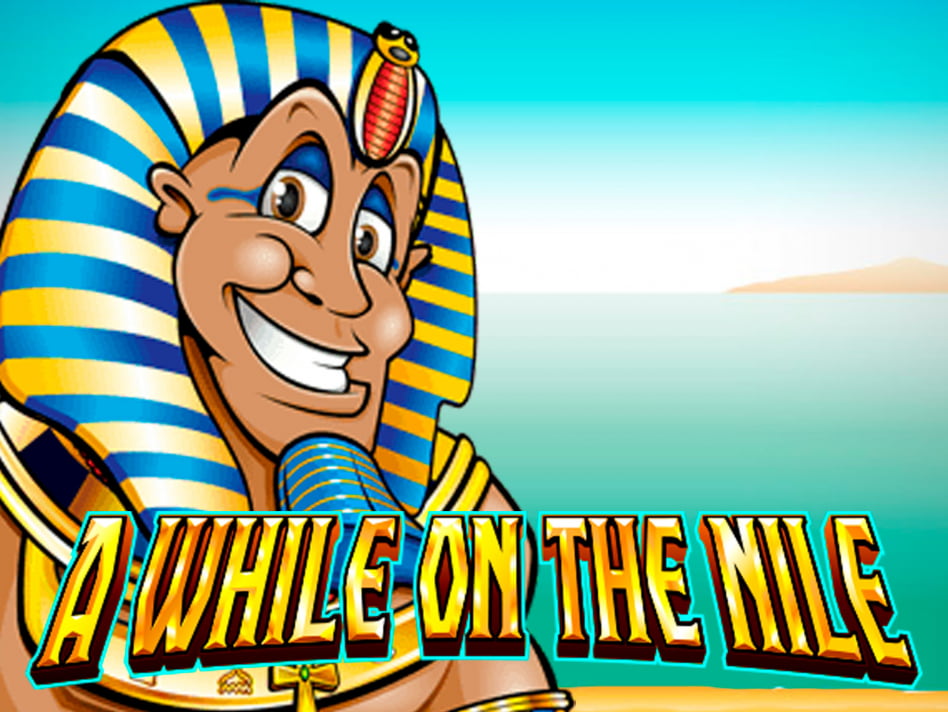 Play A While On The Nile on any of these top casino sites;

In the background of A While on the Nile is an odd sounding track that isn’t in keeping with the overall theme. Then overlaid on top are noises which occur every time a win is formed. In all it makes for a very noisy situation, so we just switched it all off in order to enjoy the game further.

Bet Amounts – Betting on A While on the Nile begins at 50p per spin and can be increased up to the maximum of £125 per spin. This can be adjusted by hitting the cog symbol in the top right of the screen and using the slider on show to adjust your bet. Once you are happy with the bet showing, you simply hit the play button to return to your game.

Wild Symbol – A rather happy looking pharaoh is your wild symbol in A While on the Nile. He will appear fully stacked covering all reel positions on reels 2, 3 and 4. The pharaoh wild symbol will substitute for all other symbols in the game except the two scatters!

Scatter Symbols – There are x2 scatter symbols in play on A While on the Nile, one will trigger the bonus spins feature and one offers the scatter pick game. The green jewel is the bonus spins scatter and it will only appear on reels 2, 3 and 4. Your second scatter is depicted by a scarab beetle which triggers the scatter game and it only appears on reels 1, 3 and 5.

Superbet Feature – NextGen Gaming offer their players a way to shake things up with the superbet feature. By activating the superbet you can increase the cost per spin but gain a little something extra, as shown below.

To activate the superbet you will need to hit the blue and yellow superbet logo found to the left of the reels. When you hit it the win multiplier choices will expand upwards, then you decide which win multiplier you wish to have activated and your bet will be adjusted accordingly. 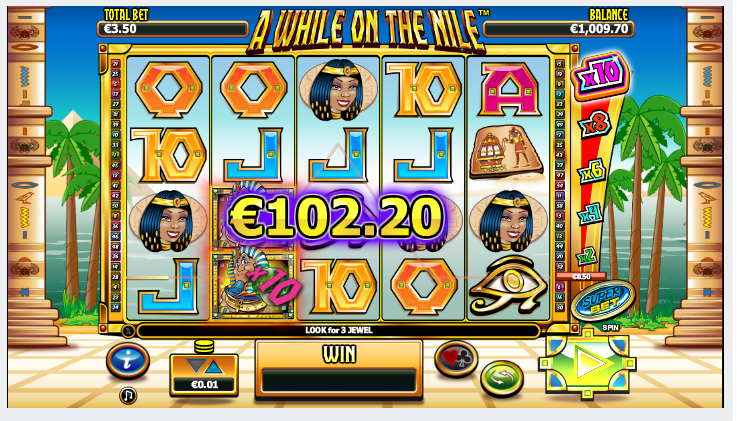 Scatter Game Feature – Landing three of the scarab beetle scatter symbols will trigger this feature game on A While on the Nile. You will now be taken to a new screen that is filled with scarab beetles to play the pick and win game. Your mission is to pick scarabs revealing prize amounts, until you uncover the scarab hiding the word collect. Once you hit the collect symbol the round is over, and your prize pot is accumulated and added to your win total before returning to the main game.

Bonus Spins Feature – If you land three or more of the green jewel scatter symbol, then you will trigger the bonus spins feature. You will be allocated with x5 bonus spins to play through, with additional spins to be won during the round. If you are lucky enough to land x3 more green jewel scatter symbols, you will be awarded an extra x5 spins to your total with no limit to the number of times you can do this. Whilst the round is in play extra wild symbols will be added at random to reels 2, 3 and 4, which will increase your win potential.

The only major downfall we have with A While on the Nile is the soundtrack, but once we switched that off the game became much more enjoyable. Main game wins aren’t very forthcoming when you first begin playing the game, but they do seem to become more frequent the longer we spun the reels. This is where the superbet feature can be tempting, as it offers ways to boost your win multiplier by increasing your stake. Whilst the superbet feature is an intriguing concept we wouldn’t advise heavily depending on this to boost your win potential, as it can be quite the drain on your balance. The two scatter features are a great addition as usually you get your bonus spins and that’s it, but the extra pick and win game is a huge draw to players across the board.