Everyone has heard about the 7 deadly sins at some point in their life, they are Lust, Gluttony, Greed, Pride, Envy, Sloth and Wrath. This slot named 7 Sins has a different take on the sins themselves. Play N Go have transformed them into 7 beautiful female characters and filled this game with graphics that just exude luxury. It’s up to you to navigate the reels and hopefully win the riches that the ladies have trapped within the game. 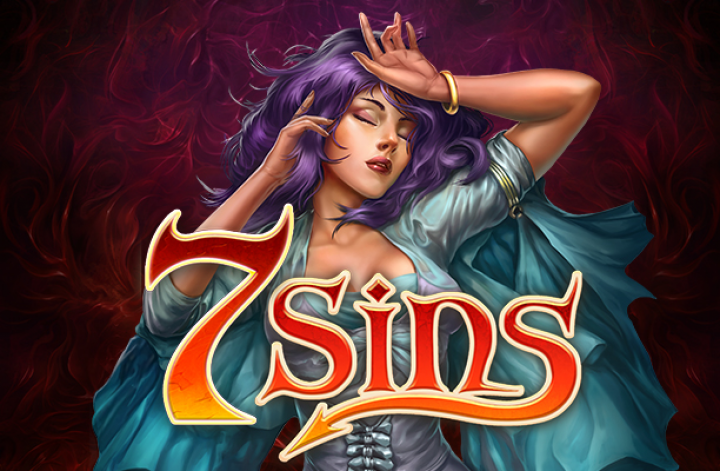 Play 7 Sins on any of these top casino sites;

7 Sins is a 5-reel slot that offers players a whopping 243 ways to win and an RTP of 96.28%. The choice of operating a ways to win feature instead of standard pay lines is becoming frequently popular with slot developers and the players they design it for. It works by simply having matching symbols on adjacent rows, beginning from the far left and moving inward to the right. They don’t have to be in a formal line or cluster to form a win. This way is preferred because it bumps up the potential pay lines you are playing.

As for the game itself, it is set against a fiery red background with wisps of smoke working their way up the screen. The 7 Sins characters form the bulk of the symbols along with your standard playing card symbols. Your higher paying symbols are depicted by the 7 female characters all symbolising a different sin. Those are Greed (yellow), Lust (orange), Wrath (red), Gluttony (blue) and Envy (green). With lower paying symbols being Sloth (Teal), Vanity (Gold) and then the Club, Spade, Diamond and Heart shapes you would normally find on playing cards.

Considering the theme of the game the background music seems a bit out of place, with lots of heavy piano sounds playing. Added to that is an equally odd sounding feminine voice vocalising along with the tune. It all made for a strange coupling, so we turned the sound off and continued to enjoy the game without the music.

Bet Amounts – Betting on 7 Sins begins at 10p per spin and can be increased up to £100 per spin. To amend your bet you can click on the symbol with the three lines, found in the lower right corner of the screen. Once you click the symbol a new screen appears, which has a slider on the left starting at 10p and ending at £100. Move the slider until you reach your desired bet and then hit the arrow in the lower right corner to return to the game.

Wild Symbol – The 7 Sins wild symbol can appear as a single or a double 7. The 7 is red with an outline in gold and both have a purple background behind them. Your single 7 wild can appear anywhere on the reels; however, the double 7 wild symbol will only appear on reels 2 and 4. Both the single and double wild symbol will substitute for all other symbols except the scatter. 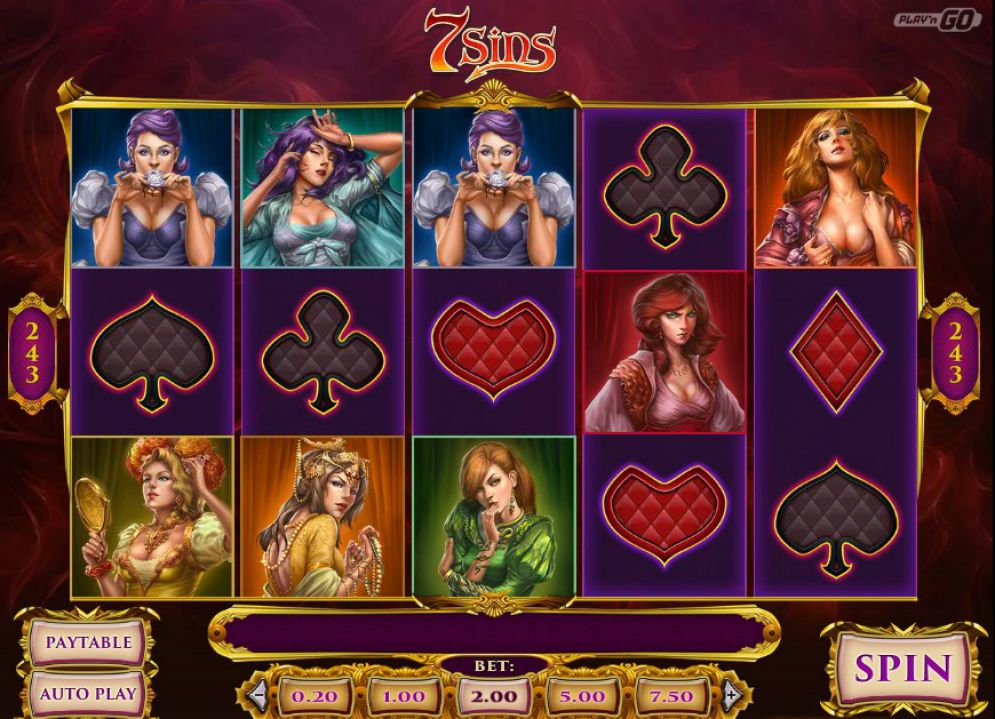 Scatter Symbols – Your scatter symbol in 7 Sins is none other than the elusive Pandoras Box. Which in this game is depicted by a golden box that has what looks like the devils face and horns carved into it. Landing three or more of the scatter symbol anywhere on reels 1, 3 and 5 will trigger the bonus spins. However, landing only x2 scatter symbols will trigger the second chance feature which you can read about below.

Second Chance Feature – If you only manage to land x2 pandoras box symbols during the base game, then you will trigger the second chance feature. Here you will be asked to choose from one of the female characters that represent the 7 sins in human form. If you choose correctly then you will instantly enter the bonus spins round. If you don’t pick the one for the bonus spins you still win a prize, and this is a random award from x1 to x15 your bet amount as a cash win instead.

Bonus Spins Feature – Landing three or more of the pandoras box scatter symbol anywhere on reels 1, 3 and 5, will trigger the bonus spins feature. Here you will be allocated with x7 spins to play through, which doesn’t seem like much but there is a twist. On each spin of the feature, one of the female characters is chosen to be fully stacked on reel 3 and that same symbol will be the only sin in play for that spin too. The win multiplier begins at x1 in the bonus round and will increase by x1 on each spin, until you hit x7 win multiplier on the final spin!

Despite only having minimum features, 7 Sins is actually a highly enjoyable game. It is well designed and executed by Play N Go with a decent RTP, making it a game that players flock too. The fact there is a second chance feature giving you an extra chance to enter the bonus spins, when you don’t land enough of those scatter symbols; is a great addition. Even better is the alternate prize win if you don’t pick the right girl to enter the spins round. Meaning even when you lose you win, in that scenario at least. Main game wins happen fairly often usually toward the lower end of the pay scale, but the big wins are there too, just not as frequent.