Gods and goddesses are a firm favourite of slot developers to design games around. Usually because they are so full of promise and exude riches beyond belief. With that in mind IGT have created the stunning Golden Goddess and much like other games from its vast library, we are sure you will enjoy it. 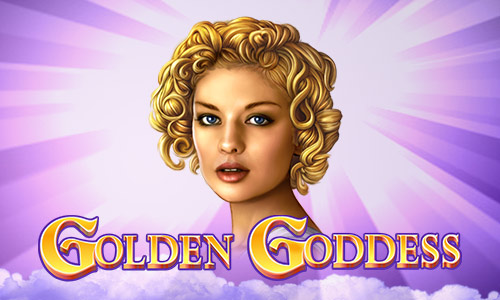 Play Golden Goddess on any of these top casino sites;

Golden Goddess is a 5-reel, 40 fixed pay line slot and offers a rather enticing RTP of 96% to players. There’s a lush background suggesting an almost heavenly feeling to it behind the reels. All of the symbols are drawn in the same style, with a kind of overwhelming exuberance coming from them. They include a dove, a horse, a man, a goddess as the higher value symbols and the lowers are all depicted by the A, K, Q, J and 10 again all ornate in design.

Bet Amounts – Betting begins at £1 per line in play and can be increased to the maximum of £200 per line in play. This makes Golden Goddess one of the bigger costing slots we have come across. Spins can vary from £1 to a whopping £8,000 per spin! Always be sure you have amended the line bet amount before each spin.

Wild Symbol – The Golden Goddess logo is your wild symbol and it will substitute for all other symbols except the scatter. Doubling up as the highest paying symbol in the game as well, it offers a huge x1000 coin win for landing 5 in a winning combination. 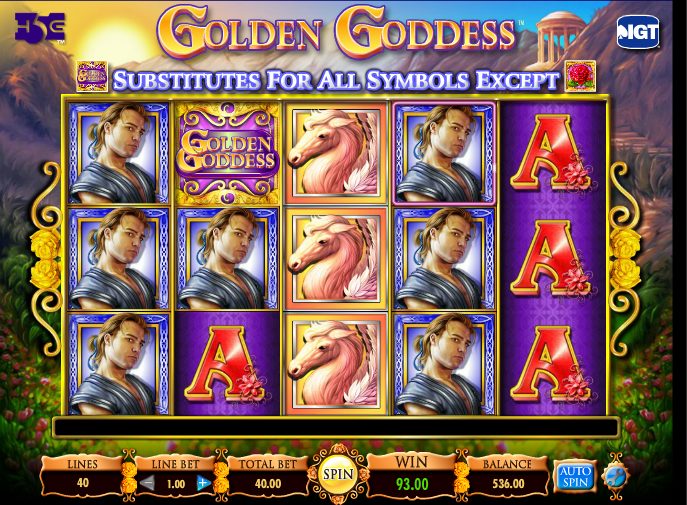 Scatter Symbol – Roses are usually a sign of love, but in Golden Goddess they are very lucky because they are your scatter symbol. All you need to do is land the rose scatter on reels 2, 3 and 4 to trigger the bonus spins. However, unlike in other games where only one symbol on each reel is needed, in this slot you need to cover all the spots on the reels. It means you need to land x9 rose scatter symbols on the three centre reels, which can be a little trickier.

Super Stacks Feature – Sometimes IGT throws in a little twist for players to give them a little extra something. Golden Goddess is one such game and this time you have something called super stacks. It means that every so often one or more of the symbols will land as full stacks on the reels and in some cases, you will land x3 stacks together. Hence the reason behind needing x9 symbols to trigger the bonus. We only hinted that it may be tricky didn’t we! If you do land a 3×3 stack of the same symbol it will transform into one large symbol and you will trigger an epic sized win, so watch out for those.

Bonus Spins Feature – After landing that all important 3×3 rose scatter on reels 2, 3 and 4 you will activate the bonus spins round. You will be allocated with 7 bonus spins and before they begin you will have to pick a rose from the ones on offer. That rose will reveal a symbol that will now become your stacked symbol for the entire seven spins.

Golden Goddess is a beautiful slot that offers something a little different than games of a similar nature. The need to have the 3×3 reel coverage to enter the bonus round would normally put us off from even trying the game out. But when you consider that every symbol in the game can appear as full stacks, it makes the chances of it happening a little higher. All things considered it isn’t actually impossible and we did manage to enter the bonus on a few occasions.

May 29, 2018 Boku Slots Comments Off on Mermaids Millions