Thanks to Playtech we can relive those glory days of beach babes and tanned hunks saving lives. Because they have created the Baywatch slot game, which is as sunkissed and sexy as we remember it being. 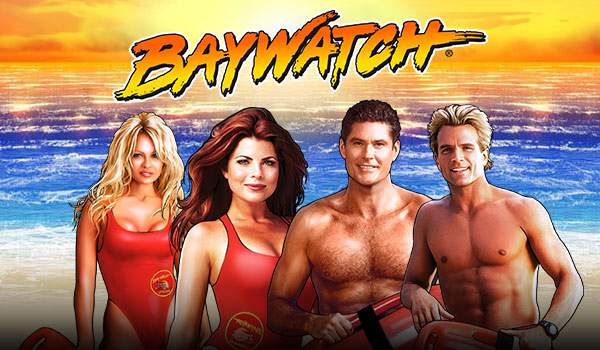 Play Baywatch on any of these top casino sites;

Baywatch is a 5-reel, 15 fixed pay line slot and offers a fantastic variable RTP of between 92.54% and 96.25% for beach goers. When the sun is shining, and the waves are crashing in the background, it’s hard to believe you are playing a slot game at times. But there we are, right in the action with the Hoff himself and the rest of the Baywatch team. Instead of card values making up the rest of the symbols we have the likes of a surfboard, a jeep, a speedboat, binoculars, a life raft and a quad bike. It would have been nice to have more relevant music from the show play along for us, but what we had was ok.

Bet Amounts – Betting on Baywatch begins at 25p per spin and can be increased to £50 per spin. There is only one way to adjust your bet and that is from the left hand side, where the coin value is held. Select the plus or minus button until you reach your bet of choice and away you go.

Wild Symbol – Your wild is a tidal wave and will substitute for all other symbols except the scatter. It also forms a pivotal role in the Tidal Wilds feature as explained below. The tidal wild will only appear on reels 2, 3 and 4.

Scatter Symbol – A red and gold emblem with the word bonus is your scatter symbol. Land x3 of these anywhere on reels 2, 3 and 4 to trigger the bonus game.

Tidal Wilds Feature – Earlier we mentioned the added extra of Tidal Wilds in the Baywatch game. Well, you will be happy to know that at any point on any spin when a wild lands it will turn tidal. This means it will either expand vertically or horizontally across one or two reels. In doing so it will complete or form bigger wins, meaning potentially bigger returns. 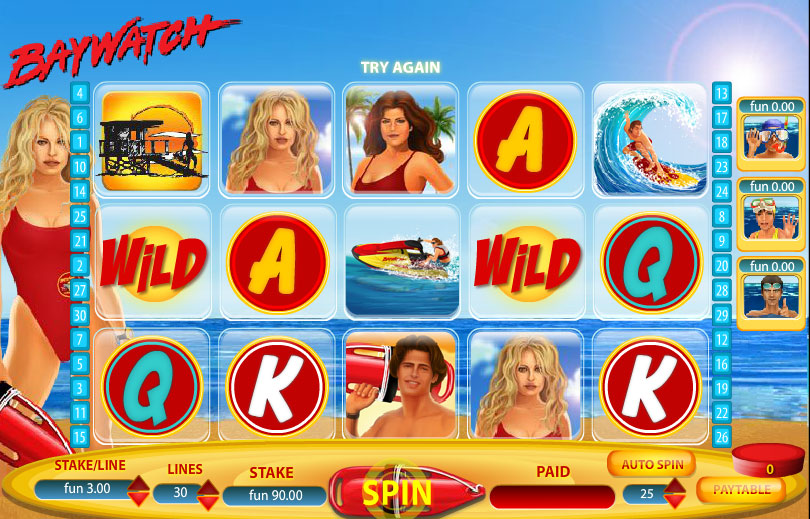 Teamwork Feature – Another randomly occurring feature is the teamwork bonus. On any spin a pair of male and female lifeguards may well merge together to create a super symbol of sorts. If it forms part of a winning combination it will increase the pay-out for that win.

Bonus Spins Feature – Landing 3 of the scatter symbols will have activated the bonus spins round for you. Now you will be asked to select one male and one female lifeguard which will determine your spin allocation and your symbol stack choice.

Once you have chosen your lifeguards, the other two will not appear in the bonus spins round. The round cannot be retriggered either, so make it count when making your choice at the beginning.

Baywatch, what can we say, you were probably best left in the 80’s/90’s when you were in your prime. It was such a shame as we had high hopes for the game, overall it ran ok and was semi enjoyable in respective of actual gameplay. But as a theme, it was lost on us unfortunately and we just feel that there was a lot more that could have been done with it than actually was. That being said the wins came along frequently and the features that are on offer do make for an ok game experience. We do leave this game behind us feeling a little dead in the water which is a shame as it is such a cult classic programme, maybe we expected too much?

November 29, 2019 Boku Slots Comments Off on Age of Asgard