Our next slot has an air of mysticism surrounding it, with runestones forming a huge part of the games design. Playtech have spared no expense when setting up Sacred Stones, combining some pretty exciting features with easy to use game play. 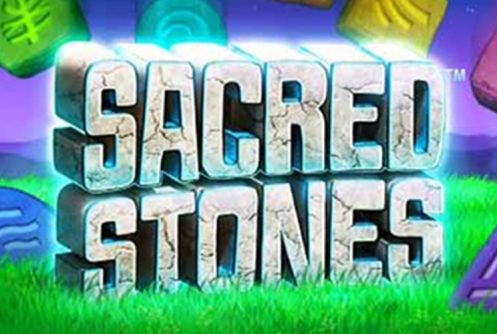 Play Sacred Stones on any of these top casino sites;

Sacred Stones is a 5-reel, 20 fixed pay line slot offering players a very tempting 96.15% RTP. Set inside what could be Stonehenge, the reels hover inside the structure as if held there by druid magic. Symbols are all forms of runic stones, there are no card symbols or gemstones here. Higher paying symbols are the red, pink, purple and orange stones, with lower paying symbols being the yellow, green, blue and teal coloured stones. As you play there is music and what sounds like low chanting, which really adds to the overall mystical feel to the game.

Bet Amounts – Betting on Sacred Stones begins at 20p per spin and can be raised up to the limit of £20 per spin. As it’s a fixed pay line game the only thing you need to change is the bet per line and to do this you use the plus and minus symbols to raise or lower your bet amount. Once you reach your desired bet, hit the spin button and get back to playing Sacred Stones at that bet level.

Wild Symbol – Your wild symbol in Sacred Stones is a grey stone with three coloured corners and an engraving which is glowing white. The wild will substitute for all other symbols in the game and it will only appear on reels 2, 3 and 4. It also appears stacked on those reels giving you bigger chances of landing those important wins.

Scatter Symbols – Unfortunately there is no scatter symbol in Sacred Stones and whilst this may be off putting to some, we would recommend that you stick with it. There is still a way to trigger the bonus spins feature and it involves the cascading reels feature which you will read about below. 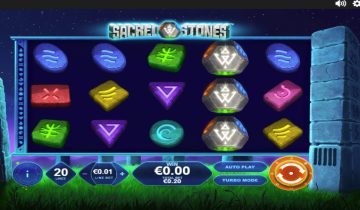 Cascading Reels Feature – This feature is used by many different slot developers and has a variety of names such as rolling reels, avalanche and waterfall drop. But here Playtech have named it the Cascading Reels and we think you are going to love it. Every time you form a winning combination those symbols included will be removed from the reels and new ones will drop into their place. This will continue to happen until no new matches are made and then you will return to your paying spins.

Bonus Spins Feature – So, get yourself x5 or more consecutive wins in the base game thanks to the cascade feature and you will be transported to the bonus spins feature. The number of spins you are allocated depends on how many cascades you completed successfully.

You can retrigger the bonus spins feature at any time during the round, by landing those consecutive wins and triggering the cascades. There is no limit to the number of times you can retrigger the spins either and all awarded spins will be added to your current total for you to play through.

Sacred Stones has taken what could have been a very slow burning and even boring slot and given it a bit of oomph. With only having the cascade reels and the bonus spins feature in play, this could have become tiresome very quickly. But Playtech were clever and tied the two features together, meaning in order to enter one you need to trigger the other. This in itself upped the ante in the excitement stakes as far as we are concerned. Add to that the main game wins, and things really do get interesting. Speaking of wins, they come along thick and fast but usually around the lower end of the pay scale. Not always in groups of x5 or more which is what you need to trigger that bonus feature. However, we found we were landing anything from x2 to x4 consecutive wins more frequently than anything. The x5 or more cascade wins you need to enter the bonus feature will happen, but it took some time for us to trigger this. Be prepared to wait a while for the bonus to trigger, but thankfully due to the cost per spin being relatively low this can be sustainable if you are willing to wait it out.

May 9, 2018 Boku Slots Comments Off on Break Da Bank Again