Viking culture is a hugely popular theme for all slot developers, some do it well others, not so much. BetDigital  slots have developed their own Viking themed slot named Valhalla and it is centred around the mythological hall of the gods. 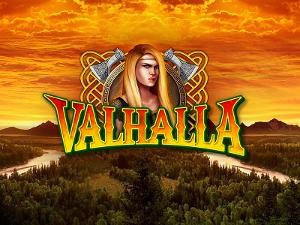 Play Valhalla on any of these top casino sites;

Valhalla is a 5-reel, 10 fixed pay line slot that offers a very unwelcoming RTP of 94%. Now, this may seem low but knowing BetDigital as we do, we are sure there is a little twist to make it all better. As the reels spin it actually sounds like you are on a ship at sea, with creaking boards and ocean sounds in the background. With the reels themselves looking like they are actually an ancient scroll and symbols representing all things Viking. Symbols such as a Viking helmet, Shield and axe, golden horn, longboat and of course the usual card symbols 10, J, Q, K and A all emblazoned in gold.

Wild Symbol – A Viking woman is your wild symbol and she will substitute for all other symbols within Valhalla. She will however only appear on reel 3 so could be troublesome to land. However when using the Valhalla Spins Feature she is a very rewarding symbol to have. 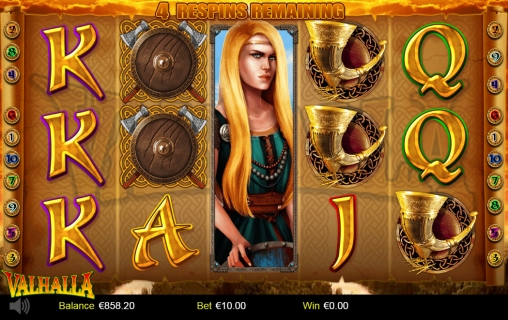 Scatter Symbol – There is no scatter or indeed any other bonus symbol in Valhalla which at first glance could be off putting to some people. But, we would advise to give a second chance to Valhalla as it has an extremely beneficial feature that more than justifies the lack of a scatter.

Valhalla Spins Feature – Ah, the long-awaited feature of Valhalla! There is no need to wait for scatters to land or bonus meters to fill for this one. Simply hit the Valhalla Spins Feature button at the bottom of the screen. On doing so you will be offered a choice of bet levels, each one comes with a collection of extras that will help create wins for you when the reels are spinning.

During all respins allocated the expanding wild will remain in place until all spins have been completed.

There may not be a scatter symbol, or indeed any other feature game, but Valhalla still delivers the big wins. In the base game the wins may be of the smaller nature regardless of bet level, but once those expanding wilds hit and you gain the respins too that’s where it starts to get interesting. Especially at bet level 5 with that increasing multiplier. When all is said and done BetDigital have created a fairly simple game with extremely effective results. Valhalla is and always will be one of our favourite games to play.