Egypt and all the riches within always make for an interesting slot game and Playtech have jumped on board with it. Creating their homage to Bastet, the Egyptian queen and immortalising her in the delightful game they have dubbed Cat Queen! As a slot it is well drawn and beautifully set out, however there is only one main feature with the added extra of a gamble option so the game could go either way. Let’s play on and find out just how well Cat Queen is going to stand up against other slots within the same genre! 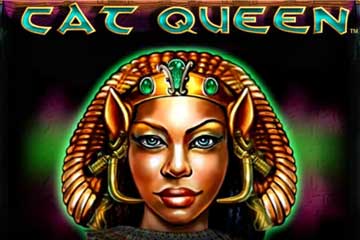 Play Cat Queen on any of these top casino sites;

Cat Queen is a 5-reel, 40 pay line slot offering players an RTP of 93.6% for players. There are huge temple structures on either side of the reels and all of the screen appears to be carved in stone. The slot itself is set out as if carved into the side of a temple, with all the symbols having something to do with ancient Egypt. There is a lovely music track playing along in the background, but it is unfortunately interrupted by the very annoying reel sounds as the symbols land.

Bet Amounts – Betting begins at 1p per line in play and can be increased up to 40p per line in play. This means that spins can vary from 1p per spin up to just £16 per spin, adding Cat Queen to our ever-growing list of affordable slots. To adjust your bet first decided how many lines you wish to have in play and the amend the bet per line. This is done by using the plus and minus symbols on either side of these sections until you reach your desired bet amount.

Wild Symbol – The Cat Queen, Bastet is the wild symbol and she will substitute for all other symbols in the game except the scatter. She is also the highest paying symbol in the game offering a mammoth x1000 your bet amount for landing five of the wild symbol on an active pay line!

Scatter Symbol – A pyramid with the eye of Horus engraved on the side is your scatter symbol. Landing three or more of the pyramid scatter anywhere on the reels will trigger the bonus spins feature. Scatter wins are also in play here meaning you get an extra prize win on top of any line wins for landing three or more scatters on the reels.

Other Symbols – Every single symbol in Cat Queen has something to do with the Egyptian theme and each one has been intricately designed. High value symbols are the pharaoh, scarab, eagle and the two gold Egyptian god heads. There are only two low value symbols and they are the golden eye of hours and the ankh symbols. 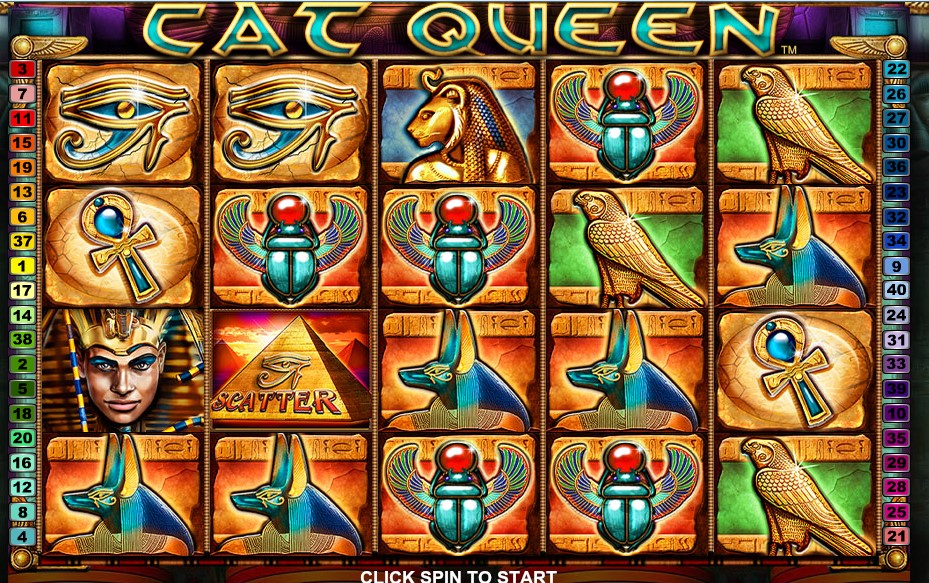 Bonus Spins Feature – Once you land three or more of the pyramid scatter symbol on the reels you will trigger the bonus feature. Regardless of how many scatters you have, you will be awarded x15 bonus spins to play through. You can retrigger the bonus spins from within the round by landing three or more scatter symbols again. However other than that there is no other multiplier for the round and no extra features. It is a very plain and simple bonus spins round, no more no less. The wild symbol is in play here though so Playtech have got that right at least.

Gamble Feature – Lots of developers add in this extra option for players to take advantage if they wish. On every winning spin you will be offered the chance to gamble your win in the hope of doubling it. You will be shown a card and you have to pick a card that is higher than the one on show. If you pick a higher card you will double your winnings, but if you pick a card that is lower you will lose your winnings and return to the game.

So, Cat Queen as a game is fairly easy to play and has some enjoyable parts to it overall. However sometimes the less is more way of doing things doesn’t always work out. For us this game had the scope of being something truly amazing. But as it stands it is just a nice way to pass the time for a few minutes because after that the boredom kicked in. Main game wins occur regularly enough if you want to play something that gives you a quick win without too much effort. Your bonus feature triggers less often which is more disappointing considering it is actually the only feature.

December 19, 2018 Boku Slots Comments Off on Sword of Destiny