As you may have guessed from the title, this next game is of the space age theme. We are about to enter the space race with Drone Wars. Thanks to Microgaming for throwing together this colourful, noisy game, because it speaks to us on many levels. First the retro theme as it takes us back to games we used to play as children. Second anything to do with space and fighting in space is always a huge draw for us and many others. Lastly the bonus feature, we love it when we are given the choice of which bonus game to play. Already ticking boxes, well let’s get spinning and see if Drone Wars can win any more brownie points? 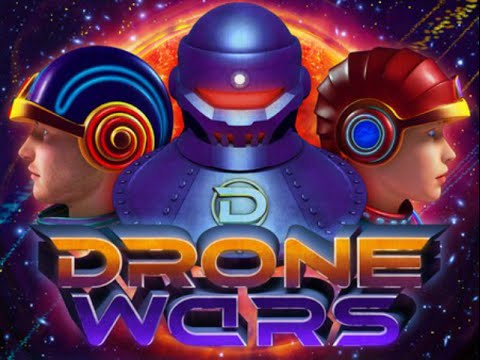 Play Drone Wars on any of these top casino sites;

Drone Wars is a 5-reel, 25 pay line slot offering all you wannabe astronauts an RTP of 95.99%. As you enter the game you will see the reels look as if part of a spaceships console (brownie points there), with space just beyond the glass. All the symbols are related to a war in space too with ray guns, rockets and drones on the reels, plus the usual card symbols. Your high value symbols are the two male space cadets, the blue drone, the ray gun and the rocket. Low value symbols are the A, K, Q, J and 10 that have all been given a space age overhaul, to keep them in line with the rest of the game. Now the only let down for us is the over the top, super loud soundtrack playing as the reels spin. It’s that loud we think you could probably hear it in space, so we switched it off as it was really annoying and began to detract from the fun of the game.

Bet Amounts – Betting begins at 1p per line in play and can be increased up to 20p per line in play. Meaning spins can vary from 1p per spin up to £500 per spin at the maximum bet amount. To adjust your bet use the plus and minus symbols found on either side of the lines active, bet per line and coin level to find your desired bet amount.

Wild Symbol – The wild symbol in Drone Wars just so happens to be the pink twirling drone symbol. When it lands it will substitute for all other symbols in the game except the scatter. 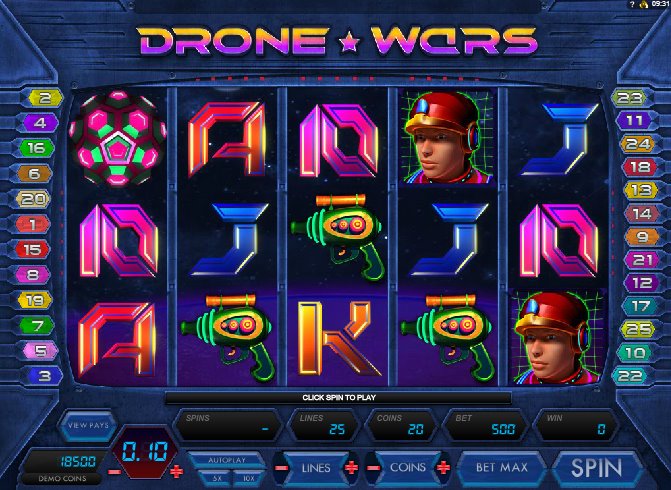 Scatter Symbol – Your scatter symbol is a black hole with the word scatter floating above it. Landing three or more of the scatter symbol will trigger the bonus feature for you. Scatter wins are also in play during Drone Wars. This means if you land x3 or more scatters anywhere in view, you are awarded an extra win on top of any line wins as well as triggering the feature.

Drone Wars without the soundtrack is pretty cool game to play, simple in parts and easy to follow. There are plenty of main game wins to be had as well as swift triggering of the bonus feature too. All in all, there are plenty of chances to win in the game. Thankfully the feature can trigger whether you are playing one line or all 25, as the scatter symbols can land anywhere in view and don’t have to be on a pay line. This will be good news for those of you that don’t want the cost of all pay lines on every spin. Microgaming have once again pulled a good slot out of their development team, we just wish they could do something with the music as it was far too off putting for prolonged gameplay. Other than that we can’t fault the game overall, because it is fun, fast paced and entertaining in an 80’s vibe kind of way.