Mystic Wheel has an absolutely stellar presence when you first enter the slot. It is almost similar in design to the notorious Stargate from the tv show of the same name. But this wheel offers you the chance to bag some big wins instead of potential alien uprisings. Designed by Red Tiger Gaming, Mystic Wheel is packed full of interesting symbols and sounds, however it has only one feature and this can sometimes be a games downfall. The only way to tell if that is the case for Mystic Wheel, is to get spinning the reels and see what is in store. 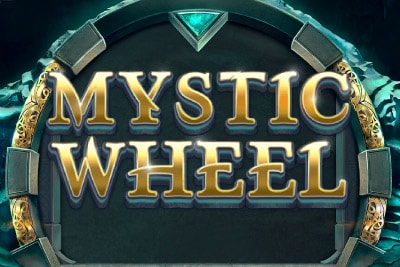 Play Mystic Wheel on any of these top casino sites;

Mystic Wheel is a 5-reel, 30 fixed pay line slot offering players a lower than usual RTP of 95.09%. Looking almost as if carved into a mountain side, the reels are filled with symbols that seem to be from the Viking period. These include rings, goblets and gems carved with intricate scrollwork and you will also find card suit symbols here too. There is a calming track playing as the reels are spinning, which is unfortunately disturbed by the metallic clacking noise the reels make as they fall into place.

Bet Amounts – Betting begins at 20p per spin and can be increased up to the maximum of just £10 per spin. Meaning Mystic Wheel lands itself a position in our more affordable slots category. To amend your bet click on the stake section at the lower left of the screen, a reel will expand up with all the available bet amounts on it. Move the reel until you find the bet you wish to play with, click it and you will be returned to the game to continue play.

Wild Symbol – There is no wild symbol in Mystic Wheel, but it doesn’t have a negative effect on the game. There is of course a scatter symbol instead which triggers the main feature and you can read about that below.

Scatter Symbols – Your scatter symbol is the Mystic Wheel game logo. Landing three or more of the logo scatter anywhere in view will trigger the bonus game for you.

Other Symbols – As mentioned above all of the symbols seem to be Viking in theme, with some relating to the loot pillaged and others carved in stone with symbols etched into the front. Higher paying symbols are the blue diamond encased in gold, a red pendant, a silver ring and a bronze key. Lower paying symbols are the card suits, spade, heart, diamond and club designed to look like they were carved from stone and painted in orange, green, blue and black.

Mystic Wheel Feature – Having landed three or more of the logo scatter anywhere in view, you will be taken to the Mystic Wheel to begin the feature. Here you will be allocated an initial x3 spins of the wheel, in a bid to win extra spins or to increase the prize multiplier for the whole round. Each segment on the wheel offers various rewards as explained below:

The game cannot be retriggered from within the round, but if you are lucky enough to land on the extra spin segments it can be extended.

Whilst Mystic Wheel seemed to offer a lot of excitement and intrigue from the offset, once we got playing we were a little underwhelmed. The game overall is actually really nice and easy to get into, but it is lacking in parts and even the main feature didn’t make it better. Main game wins were very slow in happening and almost always on the lower end of the pay scale, with barely any larger wins appearing during our time with the game. The only saving grace was that the main feature did trigger more often and even though it was a wheel of fortune style game, we came out with some pretty hefty win multipliers added to our bet amount. Unfortunately for us this isn’t quite the game we wanted it to be, but it does have its good points. if it had just had maybe one extra feature to talk about we may just have been tempted to continue playing, but after a while it just got too monotonous for us.