We bet you have never played a slot based around crossing the road, have you? Well now is the time to change that, as we enter the cartoon world of Spin Town developed by non-other than Red Tiger Gaming. This game combines not one, not two, but five different features, one of which is a progressive jackpot. We are going to stand patiently at the crosswalk, and once that green man says go it’s time to watch those walking wilds get moving! 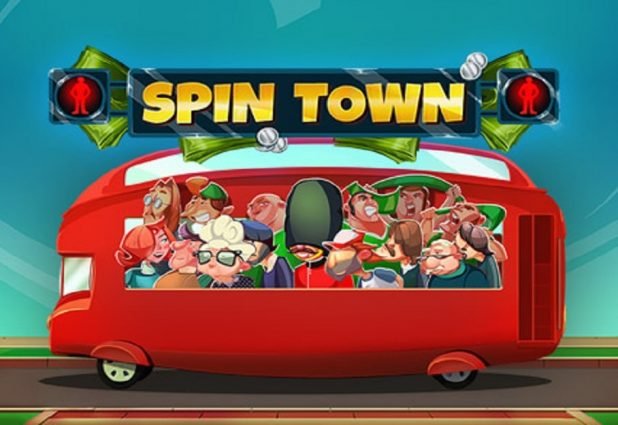 Play Spin Town on any of these top casino sites;

Spin Town is a 5-reel, 40 fixed pay line slot that offers players an RTP of 96.18%, that should be enough to get you on your feet! As for the reels themselves they are tilted slightly giving the appearance of being a road surface with a pedestrian crosswalk on it. The white lines of the crosswalk are what make up your reels and you will see that pretty soon people start lining up on either side to use it. The reels are filled with symbols that you might find your everyday pedestrian carrying such as keys, a retro boombox and then of course we have the usual card symbols to pad them out.

High paying symbols are the briefcase full of cash, a bike helmet, a boombox, a wallet and car keys. Low paying symbols are the A, K, Q, J and 10, and nothing really stands out about the low paying symbols which is a shame as the rest of the game is so well drawn. In the background of Spin Town you have your usual street sounds, birds chirping and a kind of retro sounding music track. Interspersed with random shouts and grumbles from the various wild characters that stand at the side of the road, waiting to cross to the other side!

Bet Amounts – Betting on Spin Town begins at 20p per spin and can be increased up to £200 per spin. To amend the bet amount click the stake button which is located at the lower left corner of the screen. Once you click it, a bet reel will expand upwards with all the available bets in view. Use the slider to find the bet you want on the reel, click it to select and then you will be returned to your game.

Wild Symbol – You have a grand total of x6 base game wild symbols, yes you read that correctly. These don’t land on the main reels to begin with however, they appear at the side of the reels and once activated they walk across from one side to the other. Your base game wilds on Spin Town are the two young boy characters with caps on, the elderly man and woman and the young man and woman. These form part of your base game wild feature which we go into more detail further below. They will substitute for all other symbols except the scatter and the other wild symbols.

Scatter Symbols – There are three scatter symbols in Spin Town, each one triggers its own feature game. You need to land three matching scatter symbols anywhere in view to trigger the relevant feature. The first is the record symbol, the second is the guardsman’s hat and the third is the football. Read on further down to find out what each of these symbols trigger and how the feature works.

Base Game Wilds Feature – Here is where you will find out all you need to know about the immense number of wild symbols that are present and how they work. But the most important piece of information is that none of the wilds may begin crossing the reels, until the green man on the lights above the reels lights up! Until that point all the wilds will have to wait at the side of the reels until the crosswalk light is green. It does mean however you may accumulate multiple wilds whilst waiting and this is only ever going to be a good thing for you.

Rock n Roll Shuffle Feature – Land three of the record symbol anywhere on the reels to trigger the rock n roll feature. From that point onwards, when you spin the reels you will see members of the Spin Town Beatles cover band crossing the road. This isn’t a bonus spins feature meaning you don’t get any spins awarded and you are still paying for them. But the four symbols act as wilds and will make their way across the reels up to x10 times each. This allows you to bag some serious win opportunities on the reels with every spin, as there will always be at least x1 wild and upto x4 wilds present until the feature is over. 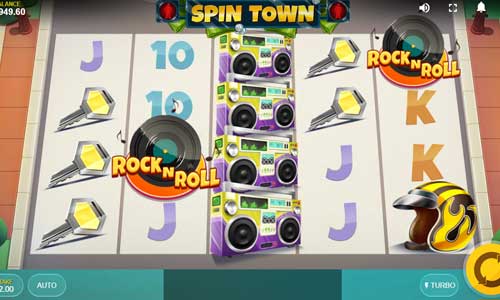 Guardsman’s March Feature – If you land x3 guards hats on the reels you will trigger the guardsman’s march feature. You will see a bunch of trumpets appear on either side of the reels and they will sound every time a guard is placed on the reels. Each guard that lands is a wild symbol and will be stacked to x2 positions high. He will move across the reel on each spin until he moves off the other side. The number of guards you are awarded is random, but you are guaranteed at least x1 guard per activation of the feature. Again, this is not a bonus spins round and each spin in the feature is paid for. But you are guaranteed a x2 position high wild on every spin until the feature ends.

Hooligan Advance Feature – Three football symbols will trigger the hooligan advance feature for you. Here you will see football hooligan symbols crossing the reels from either side, as with the other features. They too act as wild symbols for the duration of the feature. But the football hooligans move in tight groups, so with this feature the symbols move onto the reels in groups of x2 or more and can be horizontal or vertical. As with the other features all the spins here are paid spins. The bonus is featured wholly around the symbols which are wilds and aid in completing potential win combinations for the duration of the round.

Progressive Jackpot Feature – There is a final bonus symbol in the game and that is the jackpot symbol. It is depicted rather cleverly by the word ‘Jackpot’ and is a bright shiny silver in colour just to ensure it grabs your attention when it lands. If you are lucky enough to land x3 jackpot symbols in the base game of Spin Town, you will be awarded one of the two jackpot prizes shown to the left of the screen. You will be awarded either the Must Drop or the Mega Drop jackpot prize. But there is also a Daily Drop prize which must be awarded to a random player, before the timer runs out each day. Each of these prizes are progressive jackpots meaning they are constantly being added to as each player spins the reels. You can see the prize amount racing up in the screen to the left of the reels.

Wowser, there was a lot to get through there, because Spin Town is certainly a busy game. Where do we begin with it all, well for us the three bonus features are a good starting point? Upon entering the features you don’t get an allocation of extra spins, but it doesn’t really matter. We don’t say that lightly as we know there are lots of you out there who live for the bonus spins round in games. With this game, when you trigger one of the three features, yes you are paying for each spin, but you are getting multiple wild symbols on the reels at any one time! This in itself is going to be profitable for anyone, whether you are betting low or high! The guardsman and the rock n roll shuffle seem to trigger way more often than the hooligan advance, but we aren’t complaining too much. Main game wins come fairly often too thanks to the x6 walking wilds that are constantly lining up at the side of the road waiting to cross. So, if complex games with tonnes of features aren’t your thing then maybe avoid Spin Town. But, if that sounds right up your street, then get to the crosswalk my friend and get spinning those reels!