Whether you are reading this in the summer or winter, Christmas is never far from people’s minds and now you can enjoy that wintery feeling all year round. NetEnt have created the very intriguingly named Santa vs Rudolf game, which is set out on Santa’s porch overlooking a vast snowscape. It’s basically the perfect way to get that festive feel and hopefully win something too. 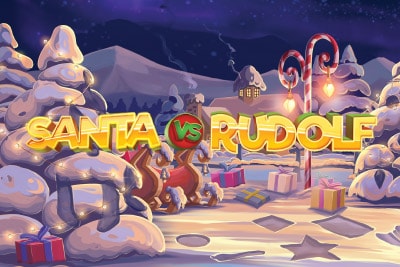 Play Santa vs Rudolf on any of these top casino sites;

Santa vs Rudolf is a 5-reel, 20 fixed pay line slot offering players an RTP of 96.35%, as a nice festive treat. The reels spin transparently above a winter wonderland set just outside Santa’s very own Lapland homestead. Santa is stuck on one side of the porch and Rudolf on the other and the naughty reindeer has stolen Santa’s hat.

Symbols are a nice mix of Christmas themed items, as well as having turned the usual card symbols into something rather tasty too. Higher value symbols are the sleigh, presents, jingle bells, snow globe and the letter from Santa. Lower values are the A, K, Q, J and 10 which are all designed to look like candy cane treats, a festive staple all over the world. There is even a lovely Christmas sounding song playing on Santa vs Rudolf, with jingle bells and tinkling music as the reels are in motion.

Bet Amounts – Betting on Santa vs Rudolf begins at 20p per spin and can be increased up to a whopping £400 per spin. You can amend the bet by using the arrows to increase or decrease the bet amount, found to the left of your spin button. Once you reach your desired bet you can simply hit spin to continue with your game.

Wild Symbol – There are two wild symbols in Santa vs Rudolf, they are the Santa symbol and the Rudolf symbol. Santa will appear on reel 5 initially and Rudolf on reel 1, but they have a little surprise in store for you which you can read about below. The Santa and Rudolf wild symbols will substitute for all other symbols in the game.

Santa/Rudolf Wild Feature – When you land a Santa on reel 5 or a Rudolf on reel 1, you will trigger the walking wild feature. This means the wild symbol will move across the reels on each new spin, until it drops off the opposite side that it began. Meaning Santa starts off on reel 5 and will move one step to the left on each subsequent spin until he falls off the reels. Rudolf lands on reel 1 and moves one step to the right on each subsequent spin, until he too falls off that side.

Here is where the two symbols get interesting though, because if Santa and Rudolph are on the same reel and they clash together, then you trigger the bonus spins! Read on below to see how that works for you. 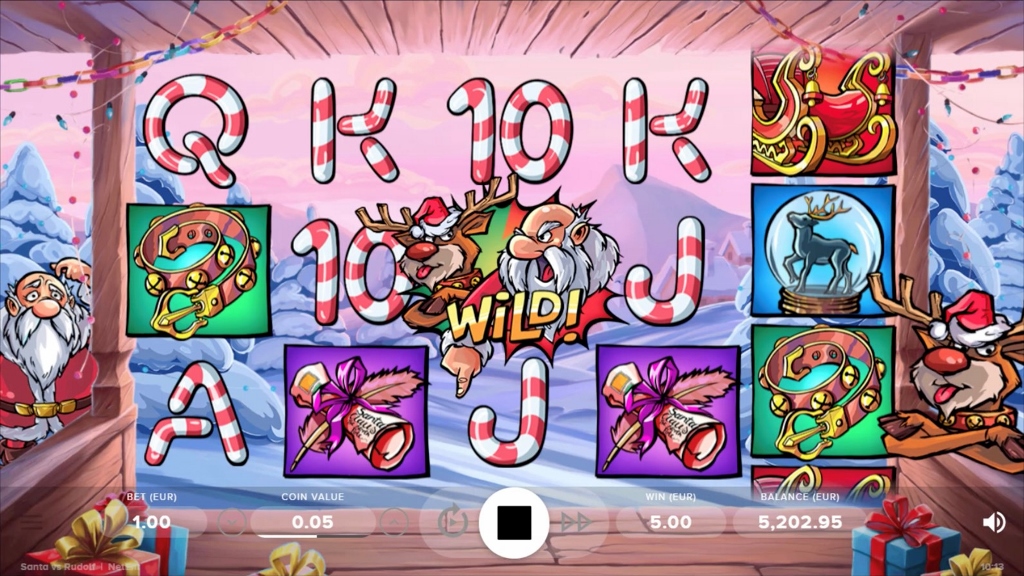 Bonus Spins Feature – Once you get Santa and Rudolf to merge on the reels you will enter the bonus spins feature. Here you will be allocated with x10 initial spins with the chance of collecting more thanks to the in-game features. The Santa and Rudolf wild symbols can now appear on any reel position and if they merge together you will be awarded an extra x4 spins on top of your running total. You will also notice that there is a meter above the reels, one for Santa and one for Rudolf. Every time one of the wild symbols falls off the reels it will fill the meter by one step. If you fill one of the meters before the end of the bonus spins, you are rewarded with an extra feature game.

Santa vs Rudolf is a nice seasonal game that actually can be enjoyed all year round, for those of you that need a Christmas fix. It looks almost cartoon strip in design, reminding us of the old Andy Capp newspaper cartoons you used to get. The walking wilds are an amazing addition to the game and certainly ramp up the excitement factor when you land both Santa and Rudolf on the same row. The bonus spins section is great fun too with an initial award of 10 spins and the chance to enter one of the two mini games. There are plenty of chances for wins to be had in the main game and those in part come down to the regular appearance of the wild symbols. Overall if you are looking for a festive fix to keep you from jonesing for all things Christmas, then Santa vs Rudolf is definitely one for your to do list!