What do you get when you combine ancient Egypt with an avalanche? You get an amazing slot called Pyramid: Quest for Immortality! NetEnt have created a visually stimulating and balance building slot that is very powerful and we’re eager to tell you more. 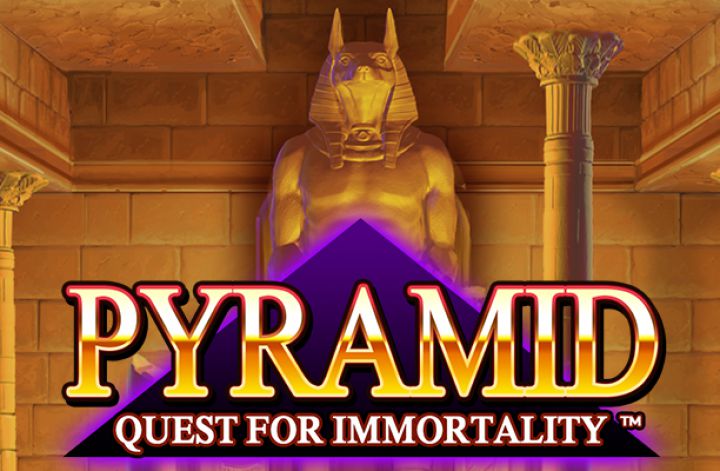 Play Pyramid: Quest for Immortality on any of these top casino sites;

Pyramid: Quest for Immortality is a 5-reel, with up to 720 ways to win and a pretty decent RTP of 96.48%. With two giant Gods standing guard either side of your reels, they spin against a pyramid backdrop and have symbols all relating to Egyptian culture.

Bet Amounts – Betting begins at 10p per spin and can be adjusted as high as £50 per spin. Amend your bet by changing the coin level or coin value to the left and the right of the spin button.

Wild Symbol – A gold ankh is your wild symbol and it will substitute for all other symbols.

Scatter Symbols – There is no scatter or bonus symbol in Pyramid: Quest for Immortality but that shouldn’t put you off. NetEnt has made sure that these little things aren’t going to be missed, by adding plenty of features.

Other Symbols – You will notice the pharaoh and the queen, along with the scarab, eagle and snake head are your higher value symbols. The card symbols that make up the lower value are set in stone and surrounded by hieroglyphs to give it a more authentic look. 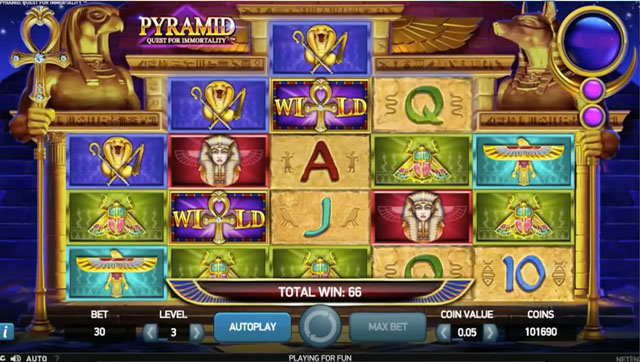 Avalanche Feature – Avalanche is not normally a word associated with Egypt, but it plays a vital role in Pyramid: Quest for Immortality. As the reels drop and you make winning combinations, the symbols forming the win will be removed. New ones will then fall into their place and potentially create new or bigger wins.

Avalanche Multiplier Feature – If having an avalanche symbol feature wasn’t enough, you will notice there is an extra twist added here. To the top of the screen you will see a multiplier open after you land a win. It will increase by x1 up to a maximum of x10 after x3 successive wins in a row. It will reset after a loss. Given that every time you land a win new symbols fall into place, there is a good chance you may get higher up that multiplier than you would think.

Wild Generation Feature – At the top of the reels when the avalanche symbols fall the top three slots on reels 2, 3 and 4 will glow purple. When a win is formed using symbols in any of these spaces they will turn wild for the next spin.

Pyramid: Quest for Immortality is certainly an interesting game for most, though it can be hard to keep your attention after a while. This is mainly due to there not being much else going on feature wise, which is a shame. However, the avalanche and multiplier is a great combination and can extend your gameplay by refilling that balance more frequently. Most players do speak highly of the game overall and we can see why as it has been very well developed. We found we needed a higher bank roll for long term play, as the game can take its time to settle into the bigger wins. But, for short term play the smaller wins received are still occurring often enough.