Prepare to be dazzled as Boku Slots take you on an epic journey with gem stones galore. Dazzle Me is a bright and colourful slot game created by the one and only NetEnt, so we have a feeling it’s going to be good!

Play Dazzle Me on any of these top casino sites;

Dazzle Me is a 5-reel, 76 pay line slot game that offers a sparkling 96.9% RTP to its players. Filled with shimmering gemstones and diamonds, the game is exuberant and luxurious in its theme. You may notice the reels are set out slightly different to the normal games you know and love. The first two reels have only three symbols showing, the next two reels have only four symbols each and the final reel has 5 symbols. There is an interesting reason for the reel set up which you will find out about below.

Bet Amounts – Betting begins on Dazzle Me at just 20p per spin when you have the coin value at 0.01p and the coin level at 1. However, as you will see these can be increased and decreased as and when you please. It means the max bet can be taken right up to £200, but always make sure you adjust the level and value of your coin before hitting spin.

Scatter Symbol – In the absence of an actual wild symbol you can take solace on the scatter symbol instead, which is depicted by the words Free Spins. Land 3 or more scatter symbols on the reels and you will trigger the bonus spins feature. 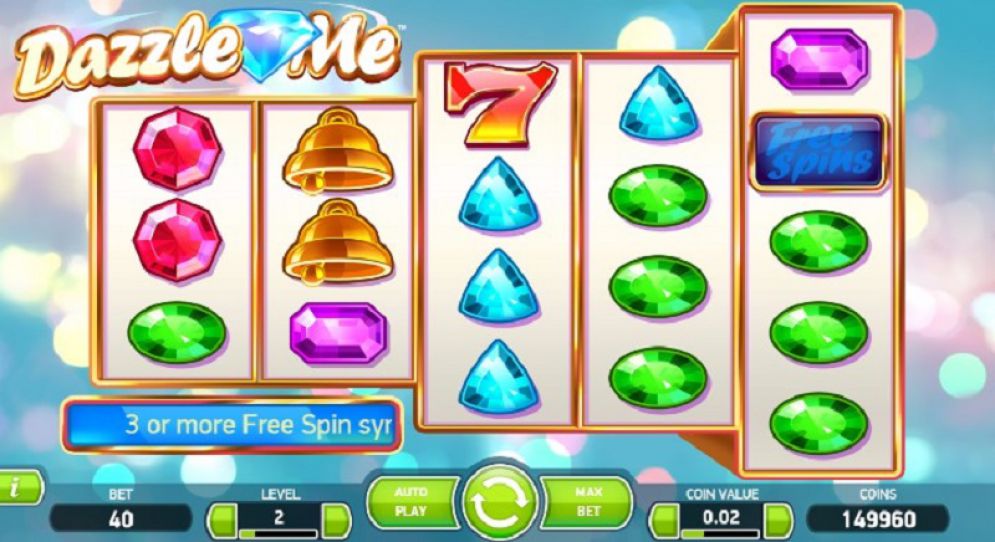 Bonus Spins – Having landed three or more scatters you will enter the bonus spins feature. You will be allocated spins as follows:

During the bonus spins you will also be allocated the linked reels feature as shown below, at the beginning of every bonus spin.

Linked Reels – You may have seen linked reels on other games, but just in case you haven’t they are a pretty nifty addition. The linked reels are only available during the bonus spins feature. At the beginning of each spin identical linked reels will appear on reels 1 and 2 or 3 and 4. The right reel will be an exact copy of the left one, creating bigger wins across the feature.

Dazzling Wild Reels – The dazzling wilds are randomly triggered during the main game only. As the reels spin, between one and five of the reels will turn completely wild and show a dazzling diamond symbol. This will complete any winning combinations and the more that turn wild, the bigger the potential win.

We aren’t sure whether the loss of a main wild in Dazzle Me is a big issue, because they have added the randomly triggered wilds instead. However for a NetEnt game this is still a bit of a let-down for us. The linked reels are an awesome addition as it’s not seen in many of the other Net Ent games. But we feel a lot of the shine we originally had for the game, was lost with the lack of originality in bonus and feature games. Overall Dazzle Me was enjoyable and value for money so that is its saviour.

Throughout this article we have used the term ‘Free’ on some of the bonuses. Please be aware that there may be terms and conditions applied or wagering requirements, should you wish to remove winning funds.