Pragmatic Play bring you Egyptian Fortunes which is a slot packed full of bright colours, with two features and a great RTP. It’s time to see what the Egyptians buried in their tombs and hopefully you can rescue some of that long lost treasure for yourself! 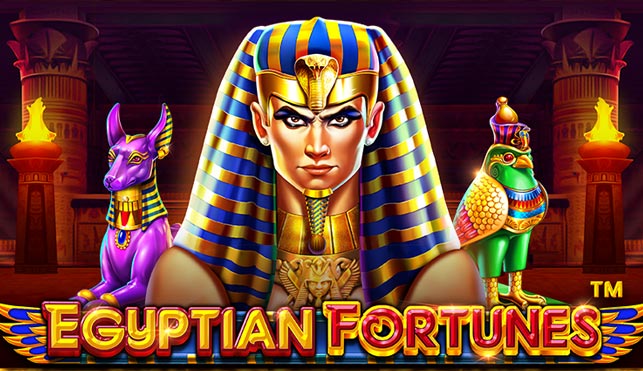 Play Egyptian Fortunes on any of these top casino sites;

Egyptian Fortunes is a 5-reel, 20 fixed pay line slot offering players an RTP of 96.5%. Your reels are boldly coloured with amazing graphics and set inside a frame made of a pharaohs staff. Symbols are a mix of Egyptian themed icons and playing card symbols. Higher paying symbols include a Pharaohs face, Anubis, Horus, Apis and Bastet which are all Egyptian gods. Lower value symbols are the A, K, Q, J and 10, and each one has been edged in gold and given an Egyptian feel to the script. As your game is in play there is an Egyptian sounding track playing along, which really lends an authentic feel to the slot.

Bet Amounts – Betting on Egyptian Fortunes begins at 20p per spin and can be increased up to £100 per spin. Clicking the plus and minus symbols on either side of the spin button will open the bet screen. Here you can changed the total bet, or you can play around with the coin level and coin value until you are happy with the total bet showing. Once you have settled on what you want to bet, click anywhere on the screen to return to your game.

Wild Symbol – A pair of golden snakes are your wild symbol in Egyptian Fortunes. They will substitute for all other symbols except the scatter. The snake wild is also the highest paying symbol in the game, offering up to a massive x250 your stake amount for landing 5 on a pay line.

Scatter Symbol – In keeping with the theme your scatter symbol in Egyptian Fortunes is a gold pyramid. This symbol will only appear on reels 1, 3 and 5, land three scatters on any of those reels to trigger the bonus feature. Scatter wins are also in play here too which offer an extra pay out on top of a line win. For every 3 pyramids you land on the reels you will also be awarded x1 your bet amount as an extra win. 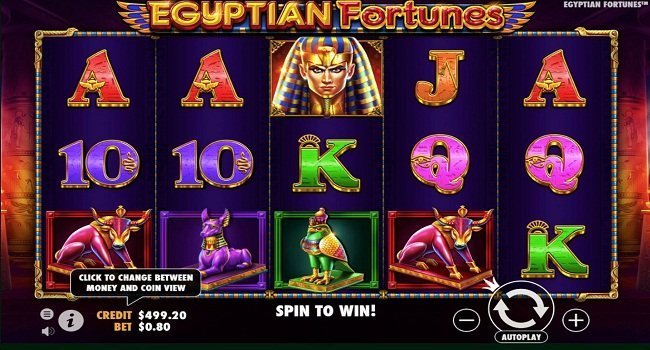 Bonus Spins Feature – If you landed three or more of the pyramid scatter symbol on reels 1, 3 and 5, you will enter the bonus spins feature. You will be allocated with 6 bonus spins and taken to a new set of reels to play through them. Now you will have three randomly selected symbols chosen for you, plus the wild symbol in play during your bonus spins round. Giving you much better chances of making winning matches on each spin. It is not possible to retrigger the bonus spins from within the round.

Egyptian Fortunes is actually a fast paced, fun game to play, especially when you factor in the chances of landing those energy spins. Even the bonus feature triggers more frequently than you would think and that on top of the other feature is a big draw, making the game popular with a lot of players. Taking the two exciting features out of the running, the game actually stands up really well without them. Main game wins are fairly even across the pay table, which is unusual when you have such well playing features. This means as a player even if the features took a while to trigger you certainly won’t get bored.