This next slot character really needs no introduction, known throughout history as the conqueror of Europe in the 19th century. Have you guessed it yet, that’s right Blueprint Gaming have designed a slot around none other than the French general Napoleon? This military themed slot named Napoleon: Rise of an Empire is sure to engage all players. 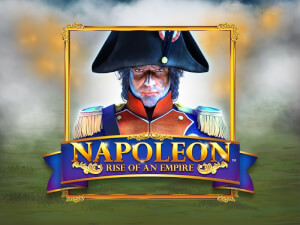 Play Napoleon: Rise of an Empire on any of these top casino sites;

Napoleon: Rise of an Empire is a 5-reel, 20 fixed pay line slot that offers an RTP of 95.96% for all who set sail in this game! The game begins with a short animation of a battle and the real war begins, that of you versus Napoleon and taking all his hard earned gold away from him. As the war wages on behind the reels, they spin inside a gilded frame of sorts. Symbols include military themes and ornate script work as well. Higher values are represented by a soldier, a ship, a horse and a cannon, with lower values represented by the A, K, Q, I, 10 and 9.

Bet Amounts – Betting begins at 20p per spin and increases to the maximum of £40 per spin in Napoleon: Rise of an Empire. Change your bet by adjusting the arrows above and below the bet amount to the left of the reels. Once you are happy with your bet you can start spinning the reels, but keep an eye on your balance and change your bet accordingly.

Wild Symbol – Napoleon himself is the wild symbol and he will substitute for all other symbols except the scatter. He also offers the highest pay out in the whole game, with 5 symbols landing a x10,000 coin win.

Scatter Symbol – A gold brooch of sorts is your scatter symbol in Napoleon: Rise of an Empire. Landing three or more of the gold scatter on reels 2, 3 and 4 will trigger the bonus.

Battle Cry Feature – Triggered at random during the main game you will hear Napoleons battle cry ring out. Napoleon will then allocate one of the following awards: 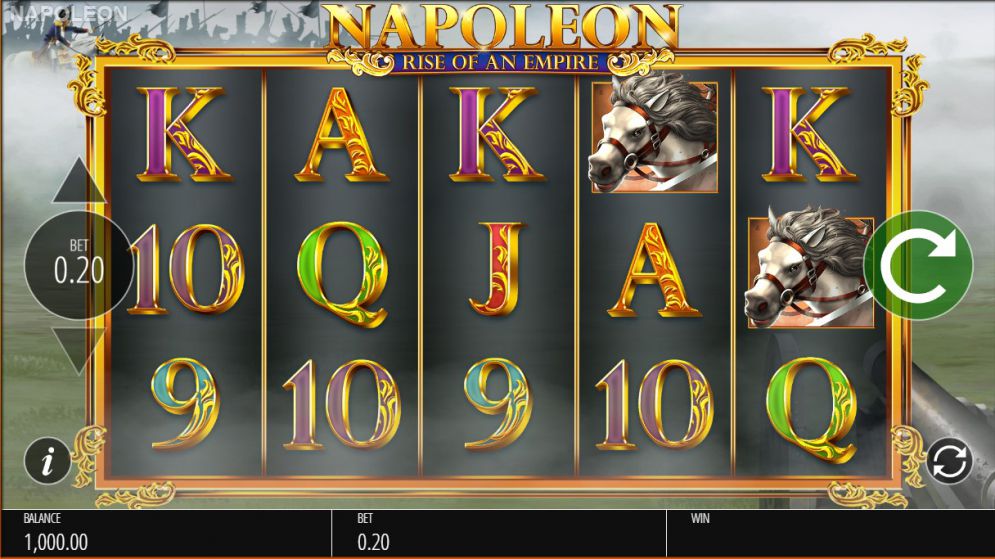 Wild Multiplier Feature – Your wild symbol also offers a mini feature of its own on Napoleon: Rise of an Empire. Land a winning combination that has a wild forming part of it, to bag a win multiplier.

Bonus Spins Feature – Having landed three or more of the gold bonus symbols on reels 2, 3 and 4 or through the battle cry feature, you will trigger the bonus game. You will now be allocated 10 bonus spins with the addition of the Napoleon Streak feature being activated. The bonus spins round can be retriggered.

Napoleon Streak Feature – This feature is only activated during the bonus spins round. Any symbols forming part of a winning combination will be held in place and award an extra spin to the total. If more matching symbols land on the next spin, they will all be held in place and another spin will be awarded. The symbols will stop being held once no new matching symbols to those being held land.

Napoleon: Rise of an Empire is a game of many parts, hopefully we have managed to explain them enough here. At the basis of the game is the historical background of the general himself, but intricately folded in between is the awesome features that Blueprint Gaming have developed. The short animation at the beginning and the moving backgrounds, sound effects and music all tie in to make an epic sounding game full of atmosphere.